Posted on 17 January 2014 by Defending History

In an attempt to maintain their reputation as the most anti-Semitic major newspaper in Lithuania, the editors at Respublika have fired a new salvo in their information war against the international forces of Communist Zionism with a straw-man argument designed to rehabilitate the swastika as a Lithuanian cultural heritage symbol.

The piece begins with remarks on what the co-authors call the curious remarks made by Vytautas Landsbergis concerning the Holocaust at a recent commemoration of the events of January 13, 1991, when Soviet irregulars attempted to retake the Vilnius television tower and 13 people died. This event is THE major calendar date in the modern Lithuanian year of martyrology. Landsbergis’s actual remarks on the Holocaust were not provided by the co-authors. In the past, Dr. Landsbergis has staked out for himself the position of Lithuanian Nazi apologist, even writing a book intended to rehabilitate the Lithuanian Nazi puppet prime minister of 1941 Juozas Ambrazavicius-Brazaitis and his government. Following an internal struggle in the Lithuanian Conservative Party several years ago, Landsbergis was basically put out to pasture and sent to the European Parliament in Brussels as an MEP, where he continues to cast aspersions on the Western narrative of the Holocaust with dubious statements and initiatives, including a major role in the attempted popularization of the Prague Declaration, which tries to dictate an absolute equivalence of Nazi and Communist atrocities.

The Respublika piece foregoes Landsbergis’s actual remarks on the Holocaust at this event dedicated to Lithuanian suffering under Communism, but notes he wore a special lapel pin, a stylized forget-me-not flower, which Respublika then claims is a symbol associated with the Wehrmacht in Nazi Germany during World War II.

Using this alleged Nazi symbol–a purple flower–as a launching pad, the co-authors then canvass Jewish opinion concerning the supposed faux pas, to no result of course, since no one considers the forget-me-not a Nazi symbol. That’s clearly not the point intended by the co-authors in any event, because they use their short interviews with Faina Kukliansky, chairperson of the Lithuanian Jewish Community, and Moishe Barak of Kaunas, to insert the idea the swastika itself is also being wrongly attributed to the Nazis and is actually a Lithuanian cultural symbol in its essence, even if misappropriated by the Nazis.

The naked attempt by Respublika to stir again the pot of antisemitism among Lithuanians by employing the forget-me-not as a faux Nazi attribute in order to foist the notion the swastika is likewise unjustly maligned in Lithuania relies upon, counts upon, the general ignorance of the Lithuanian readership, and shows once again that Respublika is not interested in the traditional role of the media in informing the public, but prefers to keep Lithuanians ignorant and pliable to media manipulation. 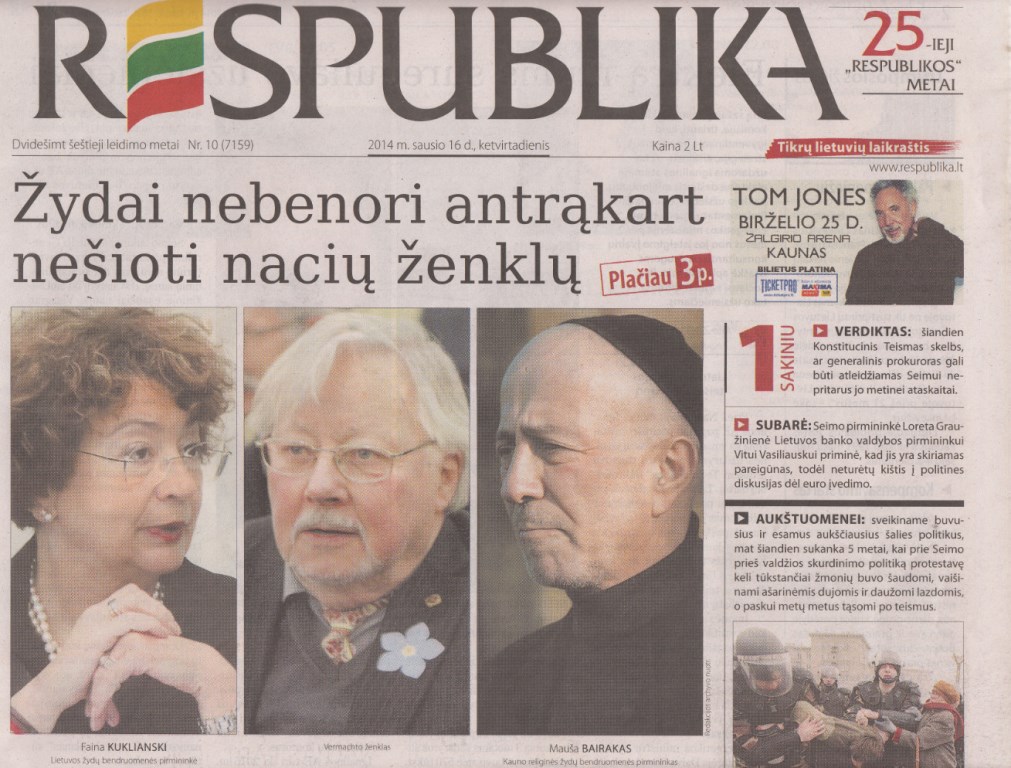