Posted on 20 January 2014 by Defending History


The following translation, by Geoff Vasil, is of a front page article in the Vilnius daily Respublika (16 January 2014). The Lithuanian original is available online. See also: Geoff Vasil’s comment on the article which may serve as an introduction to some of the local issues and nuances. 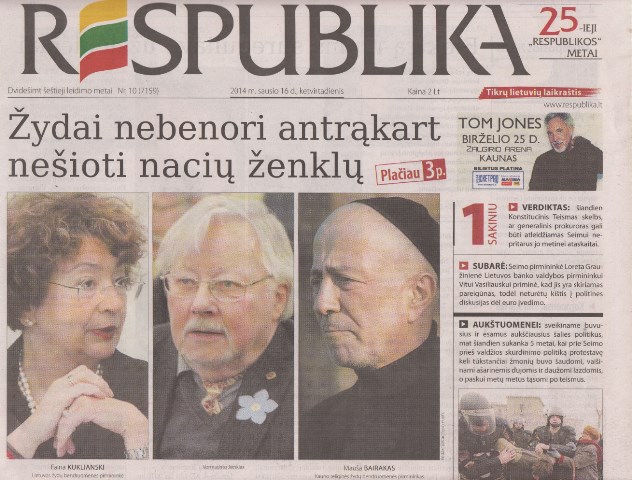 January 16, 2014 by Asta MARTIŠIŪTĖ and Olava STRIKULIENĖ, Respublika reporters MEP Vytautas Landsbergis, chairman of the Supreme Soviet/Restored Parliament of Lithuania, speaking at a solemn event to commemorate January 13 [1991], spoke in his speech about the Holocaust as well. Was it necessary to mention this at a ceremony dedicated to the 14 defenders of Lithuanian freedom who died and who hadn’t even been alive during Holocaust times? Beyond this, January 13 [commemorations] didn’t come off without yet another curiosity. A Wehrmacht symbol was used in the “Forget-me-not” campaign and MP Rasa Juknevičienė said next January it will be possible to acquire these symbols [lapel pins] throughout Lithuania, and not exclusively in the capital.

Symbol for the Defenders of Freedom Found among the Nazis

The forget-me-nots sparkled dazzlingly in parliament on January 13, as this was the idea for honoring those who have fallen for freedom. The Presidential [Press] Service announced the head of state, too, had joined the campaign, and had adorned her clothes with a forget-me-not. Parliamentary chair Loreta Graužinienė sported a forget-me-not as well on her jacket, and so did Supreme Soviet chair and conservative patriarch Vytautas Landsbergis. To put it simply, rare was the politician or guest who did not wear the symbol. As Respublika has reported before, according to ethno-cosmologist Jonas Vaiškūnas the blue forget-me-not flower adorning the participants at the solemn ceremony held in the March 11 Hall at parliament, was also used by the military of Nazi Germany. So the question arises why it wasn’t possible to find a symbol for commemorating the martyred defenders of Lithuanian freedom in our own history, why it was necessary to borrow a symbol with a poor historical reputation? [interviews begin here] Supreme Soviet chair Vytautas Landsbergis who spoke at the January 13 commemoration paid much attention to Holocaust victims, too. What do Lithuanian Jews think of that? Respublika asked Lithuanian Jewish Community chairperson Faina Kuklianksy. “We greeted this speech favorably. We released a public thank you. For the first time in the history of Independence. In any event this is a serious political personality who spoke without ambiguity.” Would you agree state institutions are striving to avoid inflaming passions? “Yes, I agree absolutely. For so many years now the state has been trying to improve relations. The current Government as well as the last one have been very favorable towards solutions to the Jewish questions. But there always appear those who have to say something and have to cast aspersions.” We have even begun to fear our own Baltic symbolism, afraid someone might think we’re antisemites. The Government resolved to change the design of clothing for the Olympics because it had a sun symbol which certain people associate with the Nazis. “I know about that. Sometimes people make mountains out of nothing.” But that’s probably out of fear, [fear] that someone might interpret it incorrectly. But the symbol of the Balts is probably innocent. “What matters is that there is a court decision and a law. If someone knows Baltic culture well, then he knows that the reverse [clockwise?] swastika is no longer a swastika, it’s a symbol of the Balts.” But doesn’t the forget-me-not, worn on the lapels of the leaders of the state on January 13, also allude to the Nazis? The forget-me-not was a symbol of the military of Nazi Germany. “I didn’t know that, but the day after the ceremony [someone] told me. They goofed, they could have chosen a different flower. They even pinned that flower on me.” But do you really think so many educated people could have made a mistake? There were so many people in the hall who consider themselves intellectuals and history experts. Did no one really know? The president and her service, too? Isn’t this an example of those aspersions you mentioned earlier, because the forget-me-not was a pre-planned campaign, and the plan is to popularize the symbol? “I don’t know. I myself didn’t know. Someone knew. I hope it won’t happen again. If it’s a Wehrmacht symbol, I won’t be wearing it again.” It’s a strange coincidence that Landsbergis, who knows history well, is speaking about the Holocaust, and there on his lapel is a Wehrmacht symbol. “Purely out of unknowing.” How will our president look if photographs of her with a Nazi symbol on her lapel circulate in the world? “It won’t look good. If a photo of me went around the world, I would just apologize. It happens, I didn’t know.” Several years ago you were an attorney in a case against Respublika, which printed what was merely a caricature of a Jew. You demanded a criminal case be brought for that. “Let’s forget about the past and move on towards the future.”

Moishe Bairak on the Holocaust, January 13 and the Forget-me-not

What does Moishe Bairak, the head of the Kaunas Jewish Religious Community who is invited annually to commemorate January 13, February 16 and other important state holidays at parliament, think about all that? “I judge Vytautas Landsbergis’s speech in part favorably. It’s just a little late. The Holocaust needed to be discussed earlier and in more severe terms.” But was it necessary to talk to the relatives of the dead defenders of Freedom? To all the defenders of Freedom? After all, there wasn’t a single person in the hall at parliament who had personally exterminated citizens of Jewish ethnicity. “Archbishop metropolitan Sigitas Tamkevičius was also selected for an award on the wrong day. People who actually struggled on January 13, 1991 should have been decorated. Not those who stood far away and watched through binoculars. And that was not the day to talk about abortion, alcoholism and gambling establishments either. And neither to say that those who voted for the Freedom prize must vote against the Law on Gambling. Vilnius archbishop metropolitan Gintaras Grušas in his speech didn’t talk merely about wholly domestic issues. I liked his speech. And on the Holocaust, there needs to be more talking about it, since this is a very painful topic. I think that we, people of Jewish ethnicity born after World War II, are in any case all children of the Holocaust. At least three of our generations will feel that loss, because it remains in our subconscious. People, politicians should also take this into consideration, so that after so many years we, the Jews living here, might feel some joy and good-will contact with our fellow citizens. That they might truly empathize with us. That we might truly know that the sort of tragedy the Holocaust was will never repeat itself. And it would be good if that Freedom were really free. Instead of window dressing. And Landsbergis himself has made mistakes. He allowed the former Communists back into power. We might have had a different life. Perhaps our children would not emigrate. European Union funds wouldn’t be squandered. In general I am surprised that every year the January 13 commemorations get drier. I will not justify myself as one of those people who stood around the Supreme Soviet with tears in their eyes  on the commemorative day. Today many of those people are already gone.” But what do you make of the fact that the forget-me-not symbol coincides with the symbol of the Wehrmacht? “I didn’t know that fact. They also wanted to pin a forget-me-not on me, but I declined. My inner voice warned me not to do that, and my intuition didn’t steer me wrong.” It seems the genes of your forefathers were activated. But in Lithuanian genes that so-called Nazi swastika is a small pagan sun. Woven into our old-fashioned towels and aprons long before Hitler was even born… “This sun symbol has come from India. Hitler just turned the rays in the opposite direction. Once I was with some foreign guests in the countryside and one academic saw ornamentation on the wall of a house. She said, look, there’s a swastika here. And so then I explained to her that it was a pagan symbol, coiled grass snakes. “These were wise people and they understood my explanation. But nowadays it’s hard for me to say what’s ornamentation and what’s a swastika. Historians should decide this question. I think the symbol closest to the Nazi symbol is the armband worn by the followers of [Mindaugas] Murza [probably the flaming trinacria armband worn by a neo-Nazi youth organization in competition with Murza — trans]. But this is my personal opinion. After all, Jews also have the Star of David, which the Soviets considered Zionist and equated with a symbol of fascism.” But a few years ago the Klaipėda police caught several youths who were allegedly propagating the swastika. But the court vindicated the youths. The young men proved these weren’t swastikas, they were pagan symbols. “If the court vindicated [them], we are powerless to deny the verdicts of the courts. It’s worse when posters are made with disgusting slogans offending citizens of Jewish ethnicity.” If it turns out that a Wehrnmacht symbol was used in the Forget-me-not campaign, will the Jewish community protest? Perhaps [you, they] will go to court, as was done when the daily newspaper Respublika published cartoons under V. Tomkus’s article, “Who Rules the World”? “It’s difficult to say. I am just the leader of the Kaunas Jewish Religious Community. Even in giving an interview, all I can do is express my personal opinion. I don’t really get involved in politics, but as a Jew, as a person, of course I would like [this] to be investigated, who proposed this ‘Forget-me-not’ campaign and why this particular symbol was used. I think, if this really is the symbol of the Wehrmacht, the Lithuanian Jewish communities will express their official opinion. But concerning the cartoons in Respublika … If the court didn’t prove anything, then that’s the end of the story.” But we, Lithuanians, we too are ridiculed. For example, that we are sharp-toothed [?] and run around carrying clubs…. “If that’s all they said about Jews, it wouldn’t be so bad. (Laughing) But when the spiritual life of the people is violated, that’s really bad. Concerning the Holocaust, [we] also need to speak very carefully, with foundation, basing our speech on facts, and not on the tales told by a hundred-year-old lady.” Prepared by the daily newspaper Respublika.

For information: Respublika’s infamous 2009 front page featuring “The Jew and The Gay” controlling the world, referenced in the above article (repeat of a 2004 front-page image under the headline “Who Rules the World?”): 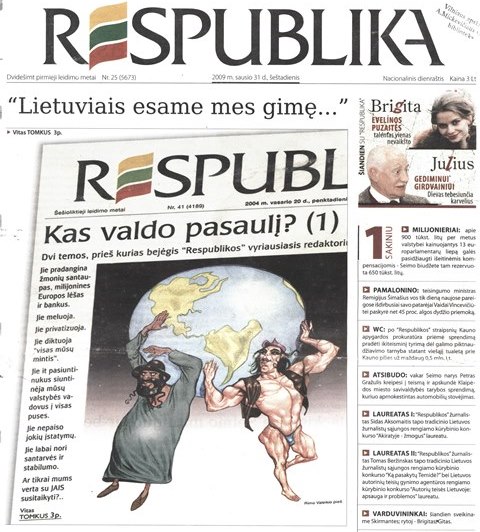 “Who Rules the World?”