This authorized translation by Milan Chersonski is based on the text of the original English article by Danny Ben-Moshe, “Hungary Rewrites History” that appeared in the Jerusalem Post on 22 February 2014.

Learning from the King

Posted on 7 October 2013 by Defending History

As I watch the news of tourists excluded from national parks in America, as Federal Government is shutdown, I recall my visit to Washington DC’s famous National Mall, when I was recently in the city for a screening of Rewriting History.

I viewed several memorials of inspiring individuals: Jefferson, Lincoln and Roosevelt. People who said no to hate and tried to foster positive political change. Physically I was in the American capital, but in the midst of Rewriting History screenings, my head was in an East European space, and this was the prism through which I saw many of the city’s magnificent exhibits. One memorial resonated with me more than any other: The Martin Luther King Memorial.

Posted in Collaborators Glorified, Danny Ben-Moshe, News & Views, Opinion, Politics of Memory | Comments Off on Learning from the King

Yad Vashem and the “Two Genocides”

This op-ed was first published in Jerusalem Report in August 2013.

I remember my first visit to Yad Vashem as a 16-year-old visitor to Jerusalem. It had a profound, and indeed formative, effect on me. I left there with a badge clipped to my lapel inscribed with the motto, zakhor, the Hebrew word for remember.

Yet for all its splendid work, Yad Vashem whose formal title is The Holocaust Martyrs’ and Heroes’ Remembrance Authority, I am sorry to say, is now dramatically failing both the martyrs and heroes of the country where the percentage of the Jewish community annihilated in the Holocaust was higher than anywhere else in Europe – Lithuania.

Authorized translation into Russian by Milan Chersonski of Danny Ben-Moshe’s op-ed, Yad Vashem and the “Two Genocides” in the 26 August 2013 edition of Jerusalem Report. 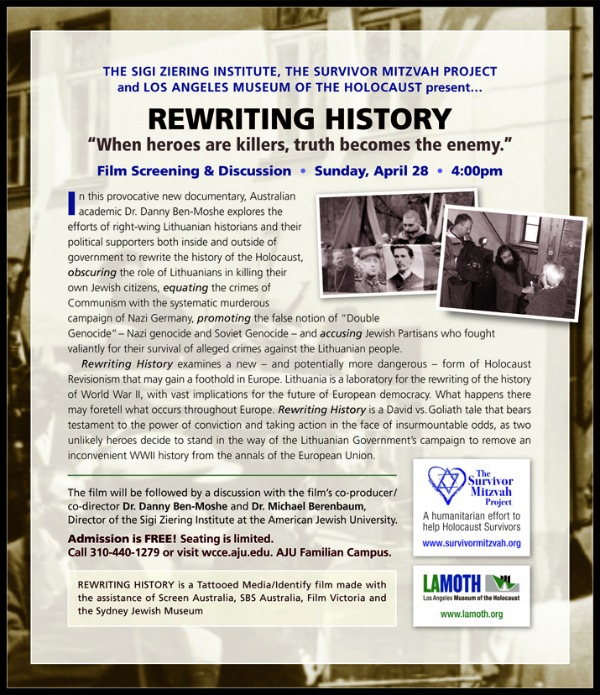 Posted in Arts, Danny Ben-Moshe, Events, Film, Lithuania, News & Views, Politics of Memory, United States | Comments Off on “Rewriting History” on the Road in the USA

Saying No to “Double Genocide”

Posted on 12 March 2012 by Defending History

The Israel-South Africa Chamber of Commerce is hosting as guest of honor Lithuanian Foreign Minister Audronius Ažubalis at a gala dinner. Given the current Lithuanian government’s policies towards the Holocaust, it is a bizarre choice.

More than twenty years into their post-Soviet eras, Lithuania and other East European nations are understandably and appropriately seeking international acknowledgment for the suffering inflicted on them by the Soviet regime.

However, rather than commemorating this in its own right, Lithuania has led the campaign to tie this recognition in with the Holocaust, in a policy known as Double Genocide. By so doing, the recognition they seek for their own suffering under the Soviets ipso facto becomes a policy that distorts and downgrades the Holocaust, and undermines and threatens its memory.

On January 20, 1942, the Nazi leadership gathered in a villa on the outskirts of Berlin and adopted the “Final Solution to the Jewish Question.” The Wannsee Conference, as this became known, from the suburb where the meeting was held, formalized the process that exterminated so much of European Jewry.

As we mark the seventieth anniversary of that 90-minute meeting in which fifteen people condemned millions to death, there are many crucial lessons to learn from the Holocaust. I wish to highlight two.

Posted on 2 November 2011 by Defending History

NOTE: This op-ed appeared in today’s Jerusalem Post (and in the Jerusalem Report).

Recent developments suggest Holocaust remembrance has fallen by the wayside as a key element of Jewish Foreign Policy, at least as far as Lithuania is concerned.

Holocaust remembrance is a central plank of Jewish Foreign Policy (JFP), a term that encompasses how Israel and Diaspora organizations act on issues of common Jewish concern. The establishment of Yad Vashem in 1953 and the Eichmann trial in 1961 showed how central the memory of the Holocaust was to Israeli public and foreign policy.