Painful Setback for Vilnius’s Standing in the West: Square is Named for a Brutal 1941 LAF Holocaust Collaborator

Posted on 12 December 2021 by Defending History 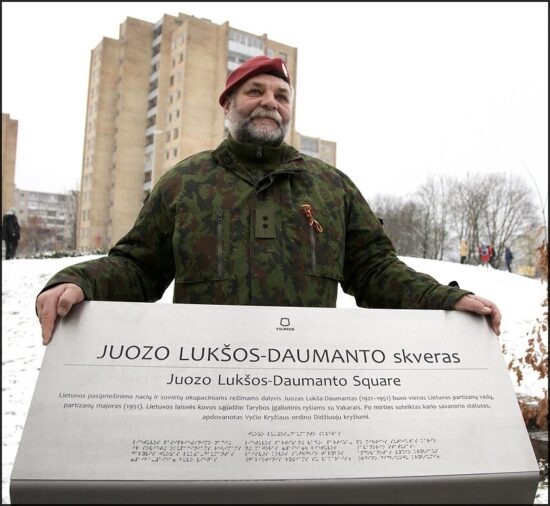 City Council Opens Brand New Square Named for Alleged 1941 Holocaust Murderer Juozas Lukša (“Daumantas”) in spite of pleas and testimony from the (late) last Holocaust Survivors who provided evidence.  Macabre note: A few city council members told us off the record that placing the square away from the city center or old town represents “a grand compromise with the Jews”… Some have cited far-right demands for the square to be opposite the Jewish Community building.

Posted on 5 September 2021 by Defending History

VILNIUS—Not for the first time, the annual Jewish High Holiday period encompassing Rosh Hashonna and Yom Kippur have provided “optimal timing” for state-sponsored activities glorifying Holocaust collaborators and perpetrators. Lithuania’s Seimas (parliament) had  declared that the year per se, 2021, would be dedicated to the memory of Juozas Lukša, identified by eyewitnesses as one of the barbaric butchers of Jews in the Lietukis Garage Massacre in Kaunas in June 1941, during the week when fascist “LAF” (Lithuanian Activist Front) Hitlerist thugs murdered thousands of Jewish neighbors before the Nazis had even taken control. In 2011 a motion in the British Parliament referred to testimony that Lukša was also involved in the beheading of Rabbi Zalmen Osovsky the same week.

“The hard-working people of Lithuania deserve much better than for their tax euros to be squandered by ultranationalist leaders on state glorification of Hitler accomplices.”

This week’s festivities included, on 4 September 2021, a speech by the president of Lithuania to honor Lukša, a brand new Lukša monument unveiled to  in a village where he operated, with participation by the director general of the Genocide Center, Dr. Arūnas Bubnys. The monument was “consecrated” by a major bishop who holds the title “president of the Commission on the External Relations of the EU”.