An Open Letter to Steve Linde, Editor-in-Chief of the Jerusalem Post

Editor’s note: This and other responses were first offered to the Jerusalem Post for publication.

The Lithuanian government is pouring ever more resources and doing an ever better job with its PR campaign to turn Litvaks (Jews of Lithuanian origin) into virtual PR agents who now go further than they do themselves: painting a picture of the New Jewish Paradise in Lithuania without even mentioning the existence of painful current issues. Jerusalem Post editor-in-chief Steve Linde no doubt meant only the best with his Chapter-of-Psalms, and will, I feel confident, now be happy to give the issues some rounded airing.

Steve, I would like to invite you to join me on a different tour — a tour of the present reality. Let’s stay away from the “past” with its ghosts and focus instead on today. Did you know there is a street name in central Vilnius honoring Kazys Škirpa, the Berlin-based head of the LAF (Lithuanian Activist Front) in 1941, whose radio speeches incited mass murder of Jews in Lithuania starting on June 23, 1941, before the Germans even got there? Oh yes, and there is a June 23rd Street in Vilnius too. In Kaunas, the major university has a bas relief and lecture hall honoring Juozas Ambrazevičius (Brazaitis), the Nazi puppet prime minister who personally signed German-origin orders for the Jews of his city to be sent to a murder site, and then another, ordering the remainder into a ghetto. There are street names all over honoring the mass murderer Jonas Noreika. It was because of local collaborators and killers like these that the percentage of murder of Lithuania’s Jews, 96%, was the highest in all of Europe.

Instead of bothering to look for a single everyday Jew, of any generation, you swallowed hook, line and sinker the spiel of the brothers Zingeris, who both enjoy high government-funded positions. Most Lithuanian Jews regard them as traitors to the victims of the Holocaust. Their sell-out of the truth about the Holocaust in Lithuania and cover-ups for what’s going on now are well known to any who follow Lithuanian-Jewish relations. Obviously they failed to mention the neo-Nazi marches sanctioned for the main boulevards of the two major cities, Vilnius and Kaunas, on the nation’s two independence days. Neither would they have mentioned the Holocaust survivors (three of them Israeli citizens — Yitzhak Arad, Rachel Margolis and Joseph Melamed) who have been defamed outrageously by the Lithuanian government. Then there is the Prague Declaration of 2008 and countless other efforts to write the Holocaust out of history by replacing it with the false doctrine of “two equal genocides” — another unmentionable.

What a shame that your whirlwind tour did not allow even an hour for you to visit your grandfather’s shtetl when you literally whizzed right by it! It would have been an eye-opener for you to see your Linde family’s names memorialized on the walls of the Multi-Cultural Center of the Kėdainiai Regional Museum. 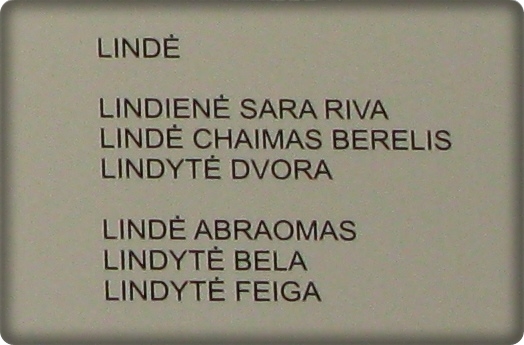 Extract from the wall of names of Keydán’s Jews who perished in the Holocaust. Courtesy Kėdainiai Regional Museum.

The reason your family name is there is that an honest Lithuanian intellectual worked hard to make naming of the victims possible. He is Rimantas Žirgulis, a historian and director of the Kėdainiai Regional Museum, who, as much as he dares, is a truth-teller. But PR trips hosted by the Lithuanian government do not engage their recruited Born-Again Litvaks with Lithuanians from whom the newbies can actually learn about real achievements (and there are many). They are presented only to the government elites who have been well honed at spewing the only party line.

What a shame that you missed those 250 hard-to-find mass graves that dot the Lithuanian landscape near all the former shtétlakh of Lita. Of course you missed those because they took you to Paneriai (Ponár) which has a memorial to the 70,000 Jews and 30,000 non-Jews who were murdered there. No need to mention the additional 155,000 Jews in the provincial areas who were also murdered mostly by their Lithuanian neighbors. The problem today is not that these murders occurred. You can’t change the past. It is that the murderers are regarded as heroes for being “anti-Soviet.”

I was taken aback, Steve, to have read in your euphoric article that you believe Vilnius is called “the Jerusalem of the North” by locals “because of its central cathedral.” What a bloated mistake for an Israeli to make! That honorable name was attached to Vilna because it had been the center of Litvak culture and intellect for centuries.

I have always believed in reconciliation with Lithuania based on honesty, sincerity and promotion of truthful Holocaust education. But the government has never gone about it in that way. It continues to deny and to bury its dark past and to carry on antisemitic traditions with no intention of curbing the appetite of its extreme nationalistic faction.

While there are many Lithuanians who would take the moral road to reconciliation, it is the government who insults the intelligence of Litvaks while courting them and wooing them with trips and honors. I am deeply disappointed, Steve, that you could be converted so easily in just four days. You were part of the PR campaign to entrap naïve foreign Litvaks. The government of Lithuania is failing its own people and fooling its Litvak diaspora.