Posted on 24 September 2014 by Defending History

On the occasion of the Jewish new year, 5775 (Sept. 2014 — Sept. 2015), starting this Wednesday evening 24 September at sundown, Defending History has announced seven symbolic (non-material) awards to individuals of extraordinary individual achievement in the field of human rights and tolerance in Lithuania. By “individual achievement” we refer to people who stood up, spoke out, and rose to the moral imperative of saying what needed to be said in the spirit of the prophets who felt an inner voice compelling their rising up, rather than in the context of a job or position at an NGO or other institution. These two genres are harmoniously complementary, and in no way demeaning to each other.

The inspiration has come from an infinitely more established set of awards, the Bagel Shop Awards for Tolerance, which named six laureates, individual as well as collective and institutional, at an elaborate and beautiful ceremony in the government building in central Vilnius held on 19 September, graced by the presence of the prime minister and a former president of Lithuania.

Defending History holds all of the Bagel Shop awardees named in the highest esteem, congratulates warmly the organizers and winners, and considers the establishment of the award a major step forward in cementing the values of tolerance and multicultural respect in mainstream organizations. These awards demonstrated how the formal societal infrastructure of tolerance-promoting endeavors leads to ongoing progress that is both important and deserving of recognition. It becomes cool to be into tolerance and that is only for the best.

In the spirit of adding to the good news about town, Defending History is here establishing seven additional symbolic awards for individuals who have championed human rights and tolerance in expressions of individual courage, often at some cost to convenience and personal interest. One of the seven, Aleksandras Bosas, sadly passed away this year shortly after penning a stunning series of poems and participating in some of the most unique human rights demonstrations in modern Europe: protesting public monuments that honor Holocaust perpetrators, monuments that violate the rights of every live and not live minority person on this planet with the cursed message that such crimes are only a detail for the annals of nationalism. The human rights of victims of genocide are every much as part of human rights as any other. We shall never forget Aleksandras Bosas or his poetry.

We name these seven awards for the biblical prophet of social justice, Amos, one of the Twelve Minor Prophets, who stormed against the arrogant Israelite elites of the 8th Century BC, elites who “sell the righteous for silver, and the poor for a pair of sandals” (Amos 2:6); those “on the mountain of Samaria, who oppress the poor, who crush the needy” (4:1); those who “take bribes, depriving the poor of justice” (5:12). While dishonorable behavior toward the poor and vulnerable is a recurring theme in Amos, the warning to the proud elders of the Israelites that they are no better than anyone else by virtue of their nationality has remained for thousands of years a crystal-clear call against racism, prejudice and superiorism of all sorts. Amos says:

“Are you not just like the Black People [of Ethiopia] to me, O Israelites?” says God.

“Did I not bring the Israelites up out of Egypt, the Philistines out of Caphtor, and the Arameans from Kir?”

The Prophet Amos Awards are therefore being presented to seven individuals in Lithuania who in the spirit of the daring lone prophet, have spoken up peacefully, whether by poems, by articles, by speeches and interviews, by peacefully demonstrating with dignity, by howsoever speaking out against injustice, be it injustice against victims or survivors of the Holocaust, or injustice against people because of their race, gender, religion, language, or private sexual life choices.

The seven laureates are not divided into categories because, as is only to be expected, the champion of human rights and tolerance often speaks out against one injustice as against another. Ieva Nakvišėlė has spoken up for women’s rights and for sexual minorities; Lina Žigelytė for Roma, women’s rights, and sexual minorities; Holocaust survivor Pinchos Fridberg for the misrepresented victims of the Holocaust, the rescuers, as well as for speakers of the Russian language suffering prejudice. In addition to calling wide attention to Roma issues, Vilma Fiokla Kiurė came out to demonstrate peacefully when a local university honored an envelope-designer whose products were often antisemitic, racist and homophobic.

Happily our seven laureates did not have to flee into the wilderness, but none of them did what they did with the support of any organization, fund, grant, job or appointment either. Moreover, one of them was stabbed by neo-Nazis in broad daylight after speaking out on women’s rights. Another has been defamed as a liar on the website of the almighty state-sponsored “International Commission for the Evaluation of the Crimes of the Nazi and Soviet Regimes of Lithuania.” A third has been harassed by police for months over articles against fascism and against the honoring of Holocaust collaborators. A fourth has been unable to see her completed documentary film released. These are verily seven among the fearless moral prophets of Lithuania in 5775. They will each be awarded Certificates of Prophet Amos Awards for Human Rights in Lithuania in the months ahead.

Needless to say the choice of the seven was not an easy one to make for the committee of three set up. Genres of human rights focused upon were in the nature of things those followed by Defending History, with no diminution of the importance of other areas.

There are many more deserving individual and individualist champions of human rights and tolerance who have put their tranquility and comfort of life at risk by refusing to remain silent. We hope that some will be included in next year’s Prophet Amos Awards for Human Rights in Lithuania for 5776 (2015–2016). In the meantime, a happy and healthy year to our readers according to all the world’s calendars. 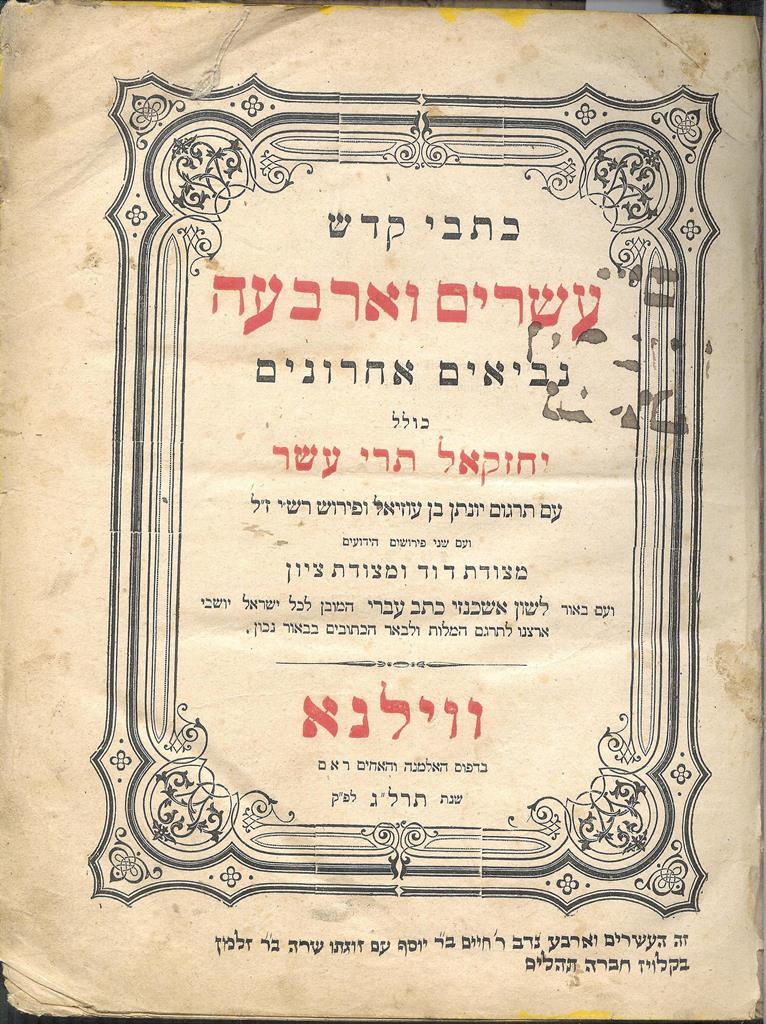 An 1873 Vilna edition, published by the fabled Romms, of Ezekiel and the Twelve Prophets, including Amos. It is a trilingual edition (Hebrew, Aramaic, Yiddish). The added inscription at the bottom of the title page explains that this set of the Jewish Bible was presented by Chaim son of Joseph and his wife Sarah the daughter of Zalmen to the Chevra Tehilim (Society of Psalms Readers) synagogue in Vilna. More on the book here. Courtesy Menke Katz Collection Vilnius.