Has “In Geveb” Done it Again?

Posted on 11 February 2020 by Defending History

VILNIUS—Yet again, “The Editors” (which editors?) of the lofty online academic Yiddish studies journal “In Geveb” have omitted mention of Defending History and of publications by any of its editors or contributors (except for occasional unsigned disparaging remarks on papers published, unbecoming of academic discourse). The context this time is a bibliography-style list of articles and opinion pieces that have appeared online concerning Yivo’s tragic recent decision to fire its entire library staff. The one omission in the list of articles? Defending History’s response to Yivo’s actions, titled: “Chelm or New York? Yivo Fires All its Librarians, While Investing ‘Fortune’ in PR for Lithuanian Government’s Jewish Politics.”  Hopefully, it was an oversight.

Posted on 12 August 2019 by Defending History

Question: Will the Roskies (In Geveb) & Fishman (JTS) “Yiddish PR conference” financed to deflect attention from the painful issues, publish a morally clear statement of protest (and support for the Jewish community)? Do conference participants appreciate concerns they are being used as “useful Jewish idiots” (UJIs) in the wider effort to rewrite Holocaust history and cover for blatant antisemitism? Note: these aspects do not detract from the high academic quality of some of the visitors’ fine papers. These are two distinct issues albeit now morally linked. This is a conference honoring Zalman Szyk (Zalmen Shik, author of the 1939 book on Vilna), who was murdered by the Nazis and their local collaborators. Surely, an event in his memory should not be allowed to cover for state-sponsored glorification of Nazi perpetrators the very same days. A simple, measured, polite statement by the conference’s leaders and participants would have been of paramount importance in the circumstances. But would it have marred those triumphant photo-ops with ministers and officials? (No, actually…)

The Lithuanian Jewish community’s callout to world Jewry came on Aug. 6, smack in the middle of the Roskies-Fishman (In Geveb/JTS) conclave. The world’s Jewish media reported on the situation facing the Lithuanian Jewish community that led to closure of both the synagogue and the community center during the conference (including: Algemeiner Journal, APnews, Forward,  France24, Jewish Heritage Europe, Times of Israel). Will the conference leaders and participants perhaps  issue a polite statement of support for the Jewish community even  after the event, having failed to dare interrupt glorious photo-ops with parliamentarians and ministers during the proceedings? Perhaps some will be in line for future medals and awards, joining an elite, illustrious coterie. 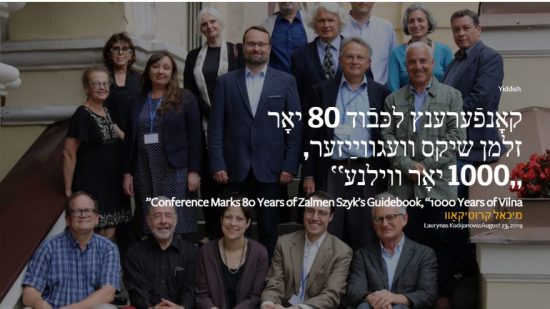 Group photo of foreign academics flown in, glorified, wined and dined by Lithuanian gov. agencies the same day the capital’s one synagogue and Jewish community had to close because of threats resulting from a publicly sanctioned demonstration glorifying  notorious Holocaust collaborator J. Noreika with a shiny new city-center plaque and bas relief. The conference was dedicated to Zalman Szyk (Zalmen Shik), who was himself  murdered by the ilk of the collaborator glorified on the day of the conference. Source: Forverts.