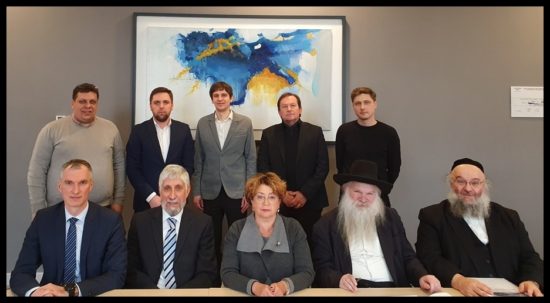 Would this ever be the fate of a Christian, Lithuanian, Polish or Russian cemetery where beloved national scholars and heroes going back centuries lie buried? On the rights of minority cemeteries in international law, see the U.S. Congress’s 2014 resolution, and the European Parliament’s 2017 resolution.

How does it all work? A certain group of London rabbis gives “permissions” where no other rabbi on the planet would agree (least of all the chief rabbi of Lithuania who was fired in 2015 for daring to speak up). Follow the body language on video. Follow a small sample of the secret money trail on Wikileaks (see points 6 to 10, and note the then stance of “no further development on the cemetery”…. That was 2009; in 2015 a new bonanza arose). See reports in JTA and the Jerusalem Post. The “CPJCE” London “grave sellers” are under investigation by the UK Charity Commission and the high rabbinical court in Jerusalem. Their top PR specialist, Rabbi Abraham Ginsberg,  told the media that the Soviet ruin now on the cemetery is “the Tower of London and Statue of Liberty combined for the Lithuanian people” while asking folks to send them  just  £250,000 (c. $330,000) for the “rescue” of Jewish cemeteries (enjoy their pizazzy website, just the thing for convention centers in Jewish cemeteries).

Over 100 relatives of people buried in the cemetery have filed affidavits with the Lithuanian courts in a case coordinated by the European Foundation for Human Rights. The case may well be headed for the European Court of Human Rights.

Some 47,000 people from every part of the world have signed a petition begging the Lithuanian government to move the convention center project to another venue and restore the old Jewish cemetery. The petition was initiated by Vilnius-born, Vilnius-resident Ruta Bloshtein, a leading figure in the city’s small Orthodox community who has worked for years in the Judaica section of the Martynas Mažvydas National Library of Lithuania.

“Lithuania, a successful EU/NATO democracy deserves a sparkling new national convention center that will be a pride and joy to local and visiting people alike.”

There have been appeals and protests from all major Lithuanian-origin rabbis on the planet (including leaders of the Soloveitchik, Feinstein, Kahaneman and Kotler families), from twelve US. congressmen, three US senators, ten members of the Knesset, the chief rabbi of Israel, chief rabbi of South Africa, elected head of the Vilnius Jewish Community, an array of Lithuanian Jews, and people of good faith from a wide array of backgrounds. See Prof. Sid Leiman’s video and writings.

The Defending History team congratulates the new coalition of Lithuanians and Jews who are speaking up with dignity and integrity under the leadership of its founder Dr. Andrius Kulikauskas.

But where is the US taxpayer funded USCPAHA —“Commission for the Preservation of the American Heritage Abroad”? (members include Chelsea Clinton’s mother-in-law and American Jewish and AZM leader Herbert Block); USCPAHA and AJC leaders have repeatedly colluded with reps of the “London grave traders” (more examples here, here, here, here and here).

“This is all in direct relation to the Holocaust. If there were, in town, tens of thousands of descendants of the buried people whose families had purchased their burial plots in perpetuity, this would never be happening.”

Ruta Bloshtein and Julius Norwilla have rushed to reply to latest attempt at “grotesque gaslighting” entailing “gross mischaracterization” of the views of Prof. Pinchos Fridberg & Prof. Josif Parasonis. See also the stance of Milan Chersonski, who was for a dozen years editor of the quadrilingual newspaper of the Lithuanian Jewish Community.