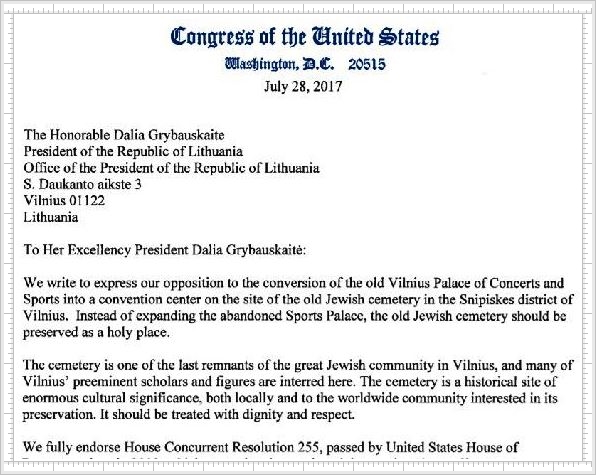 The congressional letter makes reference to House Concurrent Resolution 255, passed by the House of Representatives in 2008, giving historical depth to American opposition to consecutive efforts to desecrate the old Vilna Jewish cemetery at Piramónt (in the Šnipiškės district) over around a dozen years. In addition, in 2014, Congress followed up with an amendment to the International Religious Freedom Act protecting the cemeteries of minority groups around the world. In the case at hand it is widely accepted that a fifteenth century vintage Christian cemetery in Vilnius would not be permitted to serve as ballast for a convention center where revelers would cheer, sing, drink at bars, and flush toilets, surrounded by thousands of graves of the city’s citizens, duly purchased by their families in perpetuity. Christian voices to date have included Dr. Andrius Kulikauskas, a Catholic philosophy professor, Protestant Pastor Michael Maass, and former Reformed Evangelical pastor Julius Norwilla who has just released Lithuanian, Yiddish, and English versions of a new poster. Despite the government-shadowing policies of the “official” Jewish community, individual Jewish residents, and leaders, have spoken up with gusto. They include Kaunas synagogue director Moshe Bairakas, Vilnius native Ruta Bloshtein, Holocaust survivor Prof. Pinchos Fridberg, DefendingHistory.com editor Prof. Dovid Katz, Vilnius Jewish Community councilman Prof. Josif Parasonis, the country’s rabbis (Burshtein, Feffer, Krelin, Krinsky), and numerous others.

In the view of some observers, congressional consistency stands in stark contrast to the eerie — some would say suspicious — silence coming in recent years from the federal agency funded by US taxpayers explicitly to preserve foreign minority cemeteries, the United States Commission for the Preservation of America’s Heritage Abroad (USCPAHA). Many regard USCPAHA as one of the more disappointing taxpayer-funded entities in Washington.

An international petition initiated by Vilnius native Ruta Bloshtein, calling on authorities to move the convention center project to another venue and restore the Old Vilna Jewish Cemetery, has just reached the 40,000 signature mark. The roster of international opposition now includes virtually all major Litvak tradition rabbis internationally, as well as many other domestic and foreign, and Jewish and non-Jewish voices. A video released earlier this year has clocked close to 12,000 views. The leading international scholar on the history of the cemetery, Professor Shnayer Leiman of New York City, has written major essays on the topic and spoken out on video.

A facsimile of the congressional letter follows. Please use the arrows in the upper left corner to turn pages.