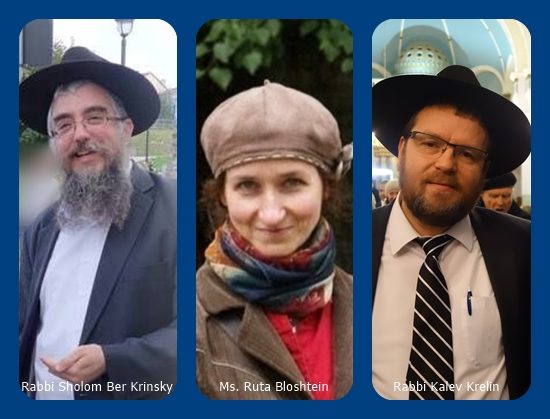 In recent years, Ruta Bloshtein, a pillar of Vilnius’s Orthodox community, has spoken out with force and conviction on two major issues.

First, on the project to defile the Old Vilna Jewish cemetery, that dates from the fifteenth century, via a convention center where revelers would cheer, sing and use lavatories surrounded by thousands of graves of Jewish citizens of Vilnius over many centuries. Ms. Bloshtein’s powerful article, “Absolute Barbarism” went right to the heart of the matter from the viewpoint of a religious Vilnius born Jewish citizen (the Lithuanian version even drew a response from Vilnius’s mayor). It was followed up by her discovery of an important document of protest from the 1930s, when a similar project was planned by state agencies. Most recently, she has launched an international petition which is, slowly but surely, attracting hundreds of signatures from around the world respectfully calling on the Lithuanian government to find an alternative site for the new convention center. The convention center project has been opposed by major Litvak rabbis internationally, as well as many others.

Second, in late 2016, when the synagogue was closed down, and police called to evict Chabad worshippers from the temporary place of prayer designated, Ms. Bloshtein, who personally does not follow the Chabad rite of prayers, defied the powers-that-be in her article “Divide and Conquer” that utterly exposed the nonsensical claims fielded against the major Jewish religious institution in Vilnius over the last quarter century. It goes to a wider question, relevant for other communities too, concerning the legitimacy of independent communities and institutions that are separate from the state’s “preferred” (and often politicized and manipulated) representative body for a given minority or cultural group.

As the general-calendar year was nearing its close, on December 16th, Ruta Bloshtein launched her international petition asking the Lithuanian government to move the new convention center project away from the old Jewish cemetery to a venue where it could be a source of pride to all. Within minutes that day, one of the first signatories was Rabbi Kalev Krelin, appointed about a year ago as senior rabbi of the official Jewish Community of Lithuania.

This was an instance where an act of singular courage and integrity entailed only the stroke of a pen (or click) moment that it takes to sign a petition. Rabbi Krelin was one of the petition’s first signatories. That, you might think, does not constitute heroism in and of itself. After all, what bona fide rabbi would not oppose a convention center in the heart of Vilna’s old Jewish cemetery? This is, perhaps, a splendid example of the role of context in determining heroism.

The previous chief rabbi, Rabbi Chaim Burshtein, was publicly dismissed in August 2015 for having expressed the view that the convention center should not be sited on the old cemetery. In doing so, he had honorably followed the unanimous decisions by the major Litvak rabbis internationally, and was in defiance of the London-based CPJCE group of Satmar-affiliated “grave traders” who support the convention center, are wined and dined by top government officials, and were exposed in the Jerusalem Post and JTA, courtesy of Wikileaks, of taking payments for their “supervision.” The saga around the old Jewish cemetery, known in Yiddish as Piramónt, and now in the Šnipiškės district of Vilnius, had developed into a startling narrative, and has attracted much international media attention.

But by standing up for the truth about the old cemetery, and the human rights of the deceased (the thousands who purchased their burial plots honestly over centuries), Rabbi Burshtein was also stepping in the way of the ruthless commercial and political interests of certain government leaders who are in close cooperation with the current lay leadership of the official community. Local Yiddish humor rapidly came up with scenarios of looking for a new chief rabbi who would “love to see” a convention center rising above Vilna’s main historic cemetery, which houses some of the greatest Jewish rabbinic scholars of the last six hundred years.

Instead, Rabbi Krelin just did the right thing. He immediately signed the just petition initiated by a member of Vilnius’s Orthodox community. The signatures of both senior rabbis in Vilnius, Chabad’s Rabbi Sholom Ber Krinsky and the community’s official senior rabbi, Rabbi Krelin, now serve to highlight the humiliating moral failure of the American taxpayer-funded Commission for the Preservation of America’s Heritage Abroad to call for a change of venue for the new convention center.

Within hours of Ruta Bloshtein’s bold petition to save the old Jewish cemetery going online, Rabbi Sholom Ber Krinsky became one of the first signatories, courageously defying a wayward “official” community leadership that was more interested in the views of the local builders and politicians.

Facing a campaign of personal and professional destruction that included, most shockingly, police being called to evict him (on 28 Oct. 2016), his children and his dedicated group of Orthodox Jewish worshippers from an “official” Jewish prayer service, Rabbi Krinsky, who with his wife Nechama Dina has been serving the religious needs of Lithuanian Jewry for nearly a quarter century, fought back mightily and with dignity, until the fictitious objections were dropped and the synagogue reopened on 5 Dec, with all praying in harmony ever since. But some damage had been done, not least by a community lay leader’s article accusing Chabad of “being supported for an ulterior purpose” which is shorthand in Eastern Europe for one or another kind of Russian plot. Long-time native-born members of the community, all of old Litvak vintage, among them Ruta Bloshtein, Leon Kaplan, Zecharia Olitskij, and Jacob Piliansky publicly replied with speed and force. DH’s editor responded as well. There was international coverage by JTA and MZ.

With scarcely a breather, however, a new campaign was then launched against Rabbi Krinsky’s annual Chanukah menorah that is one of the hallmarks of modern, tolerant, culturally diverse Vilnius. That campaign included articles by a local academic, an unsigned piece on the official Jewish community website, and an antisemitic tirade that rehashed the Russian Czarist government’s odious antisemitic charges against the quintessentially Lithuanian Jewish group he is affiliated with, Chabad-Luabvitch, back in the 1790s (!). Following a tense run-up, Rabbi Krinsky and his colleagues pulled off one of the most spectacular Vilnius Chanukah successes ever, drawing hundreds of people to the central Kudirkos Square, as well as the mayor, parliamentarians, and top diplomats from the American, Norwegian, Turkish and other embassies. The mainstream media coverage of the highly successful event included the City of Vilnius website, TV3.lt, Lrytas.lt, 15min.lt, Delfi.lt  and Wilnoteka.lt.

In the midst of all the vicious campaign’s darts and arrows, Rabbi Krinsky maintained 100% commitment to joyous Jewish religious services and observance, while setting up a separate blog, Rabbi Krinsky’s Blog, to fight his corner in all its detail. One does not have to agree with him on every point to understand the wider service he has performed for the minority communities of modern Eastern Europe.

First he has shown by example that fighting courageously does entail entering the fray, in one’s own name, and putting it out there, a trait that defies a Communist-era derived generalized fear that takes many years to dissipate in this part of the world.

Second, Rabbi Krinsky’s blog served to expose a wider human rights and Holocaust-related scandal. Documents he revealed show that the multi-million package of government Restitution funds, administered by the “Good Will Foundation” with funds deriving from the annihilated pre-war religious Jewish community’s religious properties, not only revels in granting straight zeros to Rabbi Krinsky’s religious Jewish school (the only one in the country), resulting in its being in debt, but now uses its site, deriving from those same funds, for some jolly Schadenfreude to effectively celebrate the school’s being behind in its SODRA or social security payments (does that make it a Good Will or a Bad Will Foundation?). But this was more than Schadenfreude. It was a pick-up on a major local antisemitic trope that in 2011 occupied the front page of a major daily, featuring a huge photograph of Rabbi Krinsky, under the headline “The Jews Don’t See Need to Pay Social Security Taxes.” Only later on in the continuation of the article would the astute reader see that many for-profit businesses and corporations in town, including Western Union, owed at the same time vastly more in these payments then the country’s only religious Jewish school which has arbitrarily been excluded from restitution derived from part of the value of the religious Jewish properties of the country’s pre-Holocaust Jewry.

Also disturbing is the list of what major grants did go for in recent years.

The official Allocation List revealed in the blog reveals that generous grants include €193,174 for PR (presumably the close-to-the-government pure-non-Jewish ersatz-Litvak “Bagel” news-manipulating machine); €43,753 for an academic project of the New York Yivo institute (whose director joined the state’s “red-brown commission,” calling forth protest from one of the last Vilna-born survivors); €29,000 for a statue of Gandhi and Kallenbach in a remote location; €28,962 for a concert by the Israeli Philharmonic; €8,000 for a Tel Aviv group that regularly serves Lithuanian government PR (most painfully concerning Holocaust-related issues) and runs high-end tours for Israelis. For more curious cases see the last section of Example 3 in Rabbi Krinsky’s blog no. 2 and the foundation’s own “statistics” page.

Second, in the course of exposing the Allocation Sheet and other pages (available on the foundation’s website but previously not noticed…), a distinct set of issues emerges beyond any specific decision for or against allocation.

That set of issues concerns the underlying ethical question, of whether the funds deriving from the religious properties of the murdered Jews of Lithuania are indeed going to benefit Jewish people and their communities and survival in Lithuania, today and for the future. It now appears that a frighteningly substantial part may in fact be going to projects that benefit the politics-of-the-hour needs of the Lithuanian and Israeli foreign ministries and other governmental departments. Israeli taxpayers would be horrified that Israeli diplomats might be encouraging diversion of funds deriving from the annihilated communities’ property from the needy Jews of Lithuania to government-desired projects that have ample sources of proper funding. Equally, the hard-working citizens of Lithuania would not support restitution going to prop up the agenda and interests of a small unit of elites in the government for whom the Litvak heritage is a manipulable tool for public relations.