Suspicions Rise on Role of “U.S. Commission for Preservation of America’s Heritage Abroad” in Plans to Build a $25,000,000 Convention Center in Heart of Vilnius’s Old Jewish Cemetery

Posted on 27 September 2015 by Defending History


VILNIUS—The American taxpayer-funded agency known as the “U.S. Commission for the Preservation of America’s Heritage Abroad” has a mission statement that stresses commitment to preserving Jewish cemeteries in post-Holocaust Eastern Europe. They are in special danger because of the Holocaust: the people buried have no descendants or relatives to care for the preservation of their final resting place. Moreover, nationalism and antisemitism sometimes come into play, with powers that be not wanting any city-center reminders of major erstwhile Jewish populations in their cities, and in any case, applying very different standards to the preservation of Jewish and Christian cemeteries. The issue was addressed in a 2014 U.S. Congressional resolution.

But strangely, the Commission is getting ever more deeply embroiled in a complex effort by property developers and high government officials in the Baltic republic of Lithuania to erect a $25,000,000 convention center in the heart of the old Jewish cemetery in Vilnius. Once completed, there will be potentially hundreds of millions in revenue flow in the years ahead. But instead of using its diplomatic means to urge that the convention center project be moved to another site in the city, where it would not sit surrounded by thousands of Jewish skeletons, the Commission has found itself in bed with a renegade group of Satmar Hasidim affiliated with a London-based committee to “protect” Jewish cemeteries that was revealed (by Wikileaks) to have demanded $100,000 for “supervision” of various works at the same cemetery in Vilnius back in 2009.

The new convention center project has met with considerable international opposition. That opposition has included the world’s premier head-of-yeshiva rabbis of Lithuanian origin, various international institutions, and a number of members of Lithuania’s small Jewish community, including a Holocaust survivor, a kashruth supervisor, a professor of building construction sciences, a rabbinic scholar, and the country’s chief rabbi. Several days after his own  statement, the chief rabbi was publicly and humiliatingly fired because of his stance on the cemetery by the titular head of the Jewish community, who is also the country’s top restitution and citizenship lawyer (for foreign applicants) with close ties to high echelons of government.

The property developers, the controversial chairperson of the Jewish community, and the prime minister of Lithuania — it is very rare that the highest politicians of a state would involve themselves in such matters — all rely on the “permission” to proceed with the building project granted by the CPJCE (Committee for the Preservation of Jewish Cemeteries in Europe), a Hasidic group in London related to the American-based breakaway “Aaronite” branch of the Satmar Hasidic movement. It’s the CPJCE that was caught red-handed in a Wikileaks documented demanding money for “supervision,” back in 2009, for “beautification” and “exploratory” digging. The document, penned by the American ambassador to Lithuania at the time, also calls for secrecy on the grounds that other Jewish groups would naturally oppose such deals if the details were made transparent. The secrecy demand seemed strange to some, given that the CPJCE is a public charity (non-profit) in the United Kingdom, and of course the U.S. Commission is a taxpayer funded public entity. Observers are asking for full transparency in rapid disclosure of what the London “grave traders” have been promised this time, in connection with the $25,000,000 convention center, whether by the developers or the government.

In early 2015, Jewish people in Vilnius were unaware that anything new was being planned on the site of the old cemetery, called Piramónt, now in the Šnipiškės district. Indeed it was long understood that a 2009 agreement for the international community to “shut up” about two new buildings erected on the cemetery (and not to demand their dismantling) also stipulated that there would be no further building projects on the rest of the site. Critics feared it was all a ruse to incrementally misappropriate all of the old cemetery over time. In any case, the public pronouncements don’t quite match a secret protocol signed in August 2009, which does not include the payments to the rabbis, that were dealt with even more “discreetly” and revealed only via Wikileaks.

Then, one fine day in April 2015 Lithuania’s evening news showed a group of very non-Lithuanian looking Hasidic Jews from London being showered with attention by none other than the nation’s prime minister, Algirdas Butkevičius. Incredibly, the London rabbis had not bothered to even inform any of the three resident rabbis that they were coming to town to meet the prime minister about the old Jewish cemetery in the city.

The prime minister of Lithuania Algirdas Butkevičius (3rd from left) is joined by Jewish affairs expert Lina Saulėnaitė in persuading one (not very Litvak-looking) haredi delegation to effectively bless the development of a twenty-five million dollar convention center in the heart of the ruined old Jewish cemetery of Vilnius. Still from: LRytas.lt TV video (at: http://media.lrytas.lt/2015/4/19/102855.mp4).

In June, the group’s American affiliate arranged a visit to “thank” the Lithuanian government for “saving” the old Jewish cemetery in the form of a visit to the consul general at the New York consulate. The press releases and articles in Yiddish, Hebrew and English all mentioned that the delegation included a prominent member of the U.S. Commission for the Preservation of America’s Heritage Abroad, Jules Fleischer.

Jules Fleischer, member of the U.S. Commission for the Preservation of America’s Heritage Abroad, with the Lithuanian consul general in New York City in June 2015, at a meeting to “thank” the Lithuanian government for “saving” the cemetery . . .

The consul with Mr. Fleischer and others affiliated with the “Aaronite” group of Satmar Hasidim who work with the London based CPJCE, which has defied all rabbinic judgments internationally to give the Lithuanian government a green light for a $25,000,000 convention center in the heart of Vilna’s old Jewish cemetery.

Then there is a second major conflict of interest which, it is believed, involves serious manipulation of an upstanding member with a long record of total commitment to Jewish causes, Herbert Block, for many years a beloved leader of the American Jewish Joint Distribution Committee and distinguished Jewish leader in New York. Last winter, he was enlisted in a new Lithuanian government funded “Jewish heritage commission” which is now thought to have been a cover for the convention center project. Its one rabbinic member is chief PR maestro of the London CPJCE. During its inaugural meeting in May in Vilnius, the commission, dedicated inter alia to “preservation of the Jewish cemeteries and Jewish mass graves in Lithuania” passed over in complete silence the plan to defile the old Jewish cemetery there with the new convention center — the one issue that should have been its central agenda. The widely respected Mr. Block then announced that he had earlier resigned from the Lithuanian government’s heritage commission but stayed on as observer, though he remains a member of another Lithuanian government controlled body, “Board of the Heritage Foundation” that is part of the state’s restitution of prewar Jewish properties. Sources stress that Mr. Block was duped into joining a new commission to help save cemeteries, unaware that it was part of a larger plan to create ample “Jewish cover” for the convention center project. The episode demonstrates how easily the U.S. Commission is manipulated by those close to the property developers in Vilnius via their “assets” at high levels of the Lithuanian government and compliant foreign Jewish personalities and organizations.

Then, on 27 August, the “Aaronite” Satmar group affiliated with the London CPJCE published an article flaunting a photograph of its members with the leaders of the United States Commission for the Preservation of America’s Heritage Abroad, featuring also Andrew Baker of the American Jewish Committee, who is considered the Lithuanian government’s “American Jewish fixer.” He has been awarded medals for his “help” with “fixing Jewish issues” for the state, some say to the detriment of Jewish causes and historic truth. He, in turn, is a member of a revisionist Lithuanian government Holocaust commission, its Jewish Heritage Commission, and its Heritage Foundation Board — in short, “everything.” Everyday members of the Jewish community in Lithuania report that he has never bothered to try to meet any of them to hear what they think about Jewish affairs here. 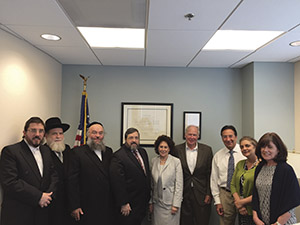 The international scandal has generated a paper trail of hundreds of internet publications, but the exposure by JTA and the Jerusalem Post of the 2009 quiet payments to the London rabbis affiliated with American groups with substantial influence over the US Commission for the Preservation of America’s Heritage Abroad have made for the most serious escalation to date in the wider media.

The public silence of the U.S. Commission for the Preservation of America’s Heritage Abroad has widely been interpreted as a kind abject acquiescence to the Lithuanian government’s desire for stamps of approval from foreign Jewish bodies. That impression was much strengthened last week when a prestigious Lithuanian publication explained as matter of fact that the convention center project proceeds in “consultation with the Committee for the Preservation of Jewish Cemeteries in Europe [CPJCE], the U.S. Commission for the Preservation of America’s Heritage Abroad, and the Lithuanian Jewish community.” There is no mention that all other rabbis (among many others) have unanimously condemned the project to build a convention center where people will cheer, clap, sing and use bars and toilets surrounded by thousands of Jewish graves going back to the fifteenth century and including some of the greatest rabbinic scholars of the last thousand years. Moreover, the CPJCE’s lone stance in “permitting” (in return for unknown considerations) the desecration of the old Vilna cemetery has been dramatically overruled by an unambiguous ruling of Satmar hasidism’s highest court (signed also by its grand rabbi), and in a public plea to the Lithuanian government by the New York based Central Rabbinical Congress.

People following the trail of intrigue are beginning to ask: Why can’t the U.S. Commission in Washington DC just politely recommend to the Lithuanian government that in light of the massive local and international opposition, it might be prudent for the good of all sides to relocate the convention center to another venue in town? Such a public statement would rapidly clear the air in Washington — and in Vilnius — over a very old graveyard in historic Jewish Vilna, known before the Holocaust as “The Jerusalem of Lithuania” for its prodigious productivity in both rabbinic and secular Jewish culture.