Posted on 11 August 2015 by Defending History

VILNIUS—The office of Rabbi Chaim Burshtein, chief rabbi of Lithuania since 2004, today released to the media the following statement, adding to statements of opposition to the proposed convention center at Piramónt. It follows a contrary statement from the head of the Jewish Community of Lithuania published on its website.

From the Office of the Chief Rabbi of Lithuania

A primary task of every Jewish community is to care about old and new Jewish cemeteries. The Vilnius cemetery in Šnipiškės (Shnipishok), long known as Piramont, was purchased by the Jewish community for the full price in 1487, and many thousands of the city’s Jewish citizens paid for their and their loved ones’ plots of burial ground. Among those buried there were many of the greatest of our nation: rabbis, dayanim, teachers, authors of books of rabbinical thought and Jewish learning. In virtue of their achievements, Vilna became the capital of the Jewish world for many generations.

During the Soviet occupation of Lithuania the visible above-ground part of the cemetery was destroyed, and the stone-engraved tributes to thousands of people of our nation and history were obliterated.

Today, in the 21st century, in accordance with the standards of culture and tolerance of the European Union, a convention and congress center must not and cannot be built on Jewish bones or surrounded by Jewish bones.

The late chairman of the Jewish community, Dr. Simonas Alperavičius did all that was possible to preserve this cemetery. Unfortunately, the current chairman of the Jewish community has agreed with state and business developers’ plans to construct the convention and congress center. Both by Jewish law (Halacha), and by secular codes of law, this is considered to be unacceptable desecration of a graveyard of human beings.

The great Torah sages of the Jerusalem of Lithuania, who were buried here for hundreds of years by their loving children, who were later themselves buried here in the cemetery, never for a moment considered that the fate of their bones (including respect for those bones by the living, in the space above the cemetery), would one day depend on the cognitive processes of the head of a Vilna Jewish community whose heart would be filled with the desire to serve the authorities and find honor in their eyes.

With all due respect to the current head of the community, none of us hold rights on the graves of the great sages of Israel buried in the old Jewish cemetery in Vilna. Instead, we must all heed the words of the great Litvak rabbis of our time and receive their words with respect. By contrast, the non-Litvak committee of rabbis “specially arranged” by the head of the community does not have any authority in my eyes, nor in the eyes of any of the great Litvak rabbis in the United States, Israel or anywhere in the world.

Please read the statement issued by twelve of the greatest living rabbis and yeshiva-heads of our generation of Litvak origin, who carry forward the living Litvak tradition, who have this month unanimously demanded that the plans for the convention and entertainment complex be abandoned and the whole of the cemetery preserved. We must all be most grateful to them for the concern, courage and care that they have invested in together issuing this statement, which must guide us all.

Chief Rabbi of Vilnius and Lithuania 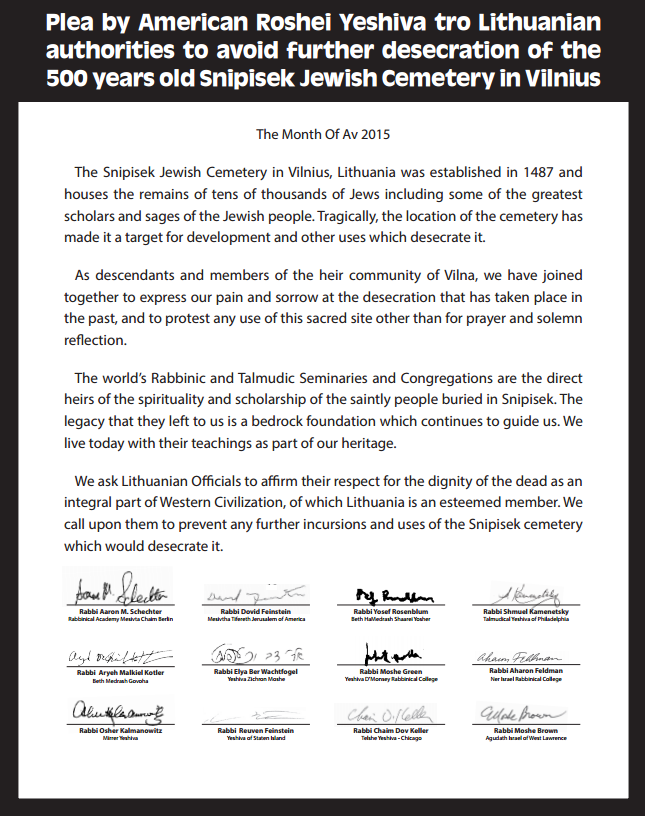