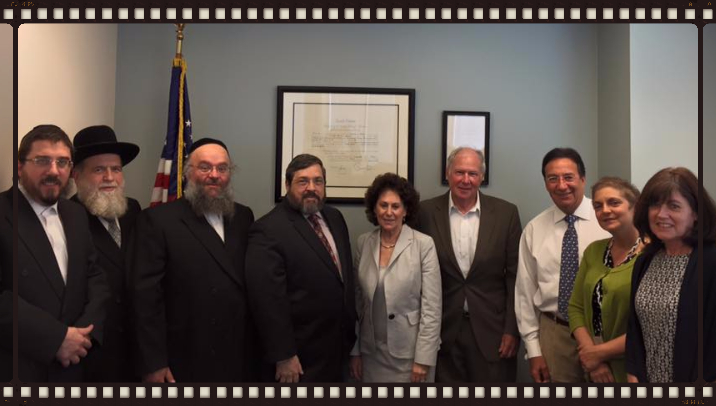 FACEBOOK POST FROM 25 AUGUST 2015: US COMMISSION’S CHAIR LESLEY WEISS HONORS CPJCE SUPPORTERS IN THE UNITED STATES At far left: Mr. Gary Schlesinger, author of defamatory tweets against Prof. Bernard Fryshman and other scholars who have stood up for preservation of the Old Vilna Jewish cemetery (sample at bottom of page). 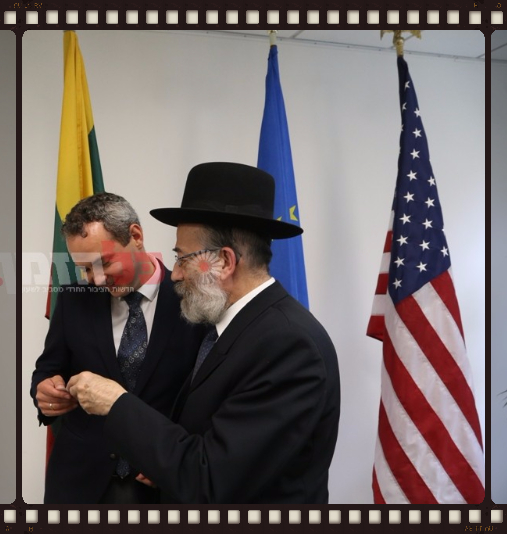 FROM AN ARTICLE IN “KOL HAZMAN” ON 6 AUGUST 2015: USCPAHA’S JULES FLEISCHER IS PART OF A DELEGATION THAT “THANKS” THE LITHUANIAN CONSUL GENERAL IN NEW YORK CITY FOR “SAVING” THE OLD JEWISH CEMETERY IN VILNIUS. . .

The full name of the American government taxpayer-funded commission is the United States Commission for the Preservation of the American Heritage Abroad (known as USCPAHA), but in a worrying conflict of interest, its member who is the point man for issues concerning Lithuania is seen in the January 2016 publicly posted photo gallery as kowtowing to the American affiliate of the London based CPJCE, which allegedly extracts large secretive payments for its permissions and supervisions, as per Wikileaks, and as reported in the Jerusalem Post, Times of Israel, and Defending History. In the names of both the taxpayer founded USCPAHA and the London-based CPJCE the word Preservation has been italicized by DH for emphasis and some irony.

To make the conflict-of-interest situation even worse, Mr. Block is a member of both boards of the Lithuanian government financed and controlled “Good Will Foundation” in Vilnius which is responsible for disbursement of restitution deriving from Jewish religious property of the annihilated Jewish communities in Lithuania. The Good Will Foundation is itself implicated in various scandals (see the ongoing petition, a recent Forward article by Paul Berger and the DH response, as well as Rabbi Sholom Ber Krinsky’s blog). In one of the more bizarre recent twists, the Foundation financed armed security guards to keep the one long-time resident rabbi in Vilnius from entering the one functioning synagogue to survive the Holocaust.

“The State Department itself had assigned decision-making authority relating to Jewish cemeteries to the U.S. Commission for the Preservation of America’s Heritage Abroad, so that well over a year has gone by without the United States government being heard on this issue. This is probably why the Lithuanian government can speak so confidently about its Congress Center ‘operating in compliance with all relevant international requirements’.”

Mr. Block is still listed as a member of a separate Lithuanian-government funded Commission for the Preservation of Jewish Heritage, though he insisted in a statement released to Defending History last year that he is merely an “observer” on that body, which locals believe was set up explicitly to divert all “Jewish heritage” attention to anything and everything outside the historic Piramónt cemetery in the heart of Vilnius.

The “Satmar rebba [rébbe]” referred to in the tweet thirteen months ago is Rabbi Aaron Teitelbaum, one of the two pretenders to the throne of grandrabbi or rébbe of the huge Satmar hasidic movement, whose organization is closely linked to the London-based CPJCE. The other contender for the rabbinic throne of Satmar is his brother Rabbi Yekusiel Zalman Teitelbaum, who by contrast, personally co-signed a rabbinic ban condemning plans for the convention center in the old Vilna Jewish cemetery, joining the world’s Litvak rabbis.

The continued public silence by the taxpayer-funded U.S. Commission is seen as untenable in the face of the web of conflicts of interest with the Satmar interests tied to the extraction of large sums of money for permissions to build on East European Jewish cemeteries in situations where all other rabbinic authorities forbid it. That the US Commission is further conflicted by ties with Lithuanian-government controlled restitution funds reaching into the tens of millions is for many observers a matter of grave concern.

Collusion with the corrupt European forces at work effectively to “sell” the Jewish graves duly paid for by citizens of Vilna over many centuries is not the only scandal USCPAHA has been involved in. Other corrupt antics were exposed in the New York Times on 14 Sept. 2015 and  24 Nov. 2015. See also coverage in The Times of Israel and the Washington Post. A detailed chronology of USCPAHA’s corrupt practices appears in a 2015 letter by Senator Ron Johnson, chair of the US Senate Committee on Homeland Security and Governmental Affairs.

For more background, see Defending History resources including an exhaustive index of the published paper trail with color coding to mark the various Satmar groups and the Lithuanian government documents, as well as DH sections on the U.S. taxpayer-funded USCPAHA omission, the London CPJCE, the Old Vilna Jewish Cemetery, and the page of links to the vast international and local opposition to the project to situate a new national convention center in the middle of Vilna’s old Jewish cemetery.

In a statement issued today, Defending History “calls on the taxpayer-funded United States Commission for the Preservation of America’s Heritage Abroad, and its chairperson Ms. Lesley Weiss, and its specialist on Lithuanian affairs Mr. Herbert Block (whose appointment to the commission was renewed in the last days of the Obama administration, reported rather gleefully on the Lithuanian government’s restitution website) to rapidly issue a statement politely asking the Lithuanian government to move its convention center project away from the old Jewish cemetery, as called for by the new international petition signed by the country’s chief rabbi and 38,000 others.”

SEE NOW UPDATE OF 27 FEB. 2017 ON THE THUGGISH CPJCE “ADMAS KODESH” AFFILIATE IN AMERICA WHICH USCPAHA HAS REPEATEDLY LEGIMITIZED AND HONORED WITH INVITATIONS & PHOTO-OPS.  SAMPLE FROM A 5 JULY 2016 TWEET ON THE EMINENT SCHOLAR PROFESSOR BERNARD FRYSHMAN [Note: The tweet’s author, the director of its origin group @AdmasKodesh, Gary Schlesinger, is a favored visitor to USCPAHA, and is one of those being honored by chairperson Lesley Weiss in photo no 2. above.]