Posted on 14 August 2015 by Defending History

BROOKLYN, NEW YORK—The high rabbinical court of the most populous Hasidic group in the world, Satmar, today released to the media the text of its judgment of 6 July 2015 calling on the Lithuanian government to abandon its multimillion dollar convention center project in the heart of Vilna’s old Jewish cemetery. The bilingual text, in rabbinic Hebrew and English, also calls on the American government to exert its influence to save the thousands of graves on the site from further desecration. The document was further signed, with an added note, by Satmar grand rabbi  (der Sátmerer Rébe) Yekusiel Yehuda Teitelbaum on 10 July 2015.

“We were horrified to hear that the government of Lithuania intends to renovate an abandoned building in the heart of the ancient cemetery of Vilna, and turn it into a place of assemblage and entertainment; and invest a huge sum of money to make it into an attraction for the masses from their country and worldwide.”

— from the Satmar Rabbinic Court’s ruling

The concurrence of the top Litvak and the top Hasidic rabbinic authorities internationally over the fate of the old Jewish cemetery in Vilna, the historic bastion of anti-Hasidic (Misnagdic) Judaism, may come to be seen as a milestone in the third century of Hasidic-Litvak relations, not least in light of the Holocaust and the lingering symbolic status of Vilna, today’s Vilnius, capital of the EU and NATO member state Lithuania.

The document brings the group into full agreement with the top Lithuanian tradition Misnagdic (i.e. historically anti-Hasidic) rabbis in the United States and Israel condemning plans for a convention center in the heart of the old Jewish cemetery in Vilna. The most important Litvak document is arguably the statement by the twelve major heads of Litvak yeshivas in the United States, including such names as Feinstein and Kotler, and another by their counterparts in Israel, including the names Soloveitchik and Kalmanovitz. Other opponents from Litvak rabbinic circles include the Vilna Gaon Synagogue in Tel Aviv (with signatures from the Gaon’s descendants), Rabbi Shmuel Jacob Feffer, president of Machon HaGro and based in Vilnius for a quarter century, and Rabbi Chaim Burshtein, said to have been removed today from his position as chief rabbi of Lithuania, a position he has held since March 2014,  precisely because of — some believe — his opposition to the convention center project. His reported dismissal comes days after his public statement.

The rabbinic Litvak opposition has been one component in an international grouping of secular and religious, Jewish and Christian opposition, including some outspoken statements by residents of Vilnius, including an Orthodox Jew, a Holocaust survivor, a professor of architectural engineering, a French-origin urban planner, a Christian Protestant pastor, and a Lithuanian philosopher and theologian. The international critical mass of opposition seems to mount daily. An analysis of the situation was published by Dr. Bernard Fryshman, who played a key role in the United States Congress passing a law, in 2014, protecting foreign cemeteries of minorities as a principle of human rights and religious freedom.

The “convention center in the Jewish cemetery” project has been condemned also by the Simon Wiesenthal Center, the Conference of Academicians for the Protection of Jewish Cemeteries, the Central Rabbinical Congress of America, Asra Kadisha, and Machon HaGró, which has published around seventy volumes of collected works of the Gaon of Vilna.

A TALE OF HIGH INTRIGUE

Some public confusion has arisen over the stance of haredi rabbinic opinion in view of a controversial group based in London having actually turned up in Vilnius in April 2015 to bless the new convention center upon personal welcome and honors from the nation’s prime minister, Algirdas Butkevičius, and his chief Jewish affairs expert, Lina Saulėnaitė. In the meantime, a Wikileaks document containing a 2009 dispatch from the then American ambassador in Vilnius confirms that precisely the same group of controversial rabbis were charging $100,000 that year for rabbinic supervision for a “beautification” program, leading to concerns that they may this time around be charging a vastly greater sum for their “supervision” which some see as a de facto “fee” for their “approval” of the project per se, which flies in the face of both Jewish law and European Union ethics and practices.

The plot thickened even further when it turned out, first, that one of that group of rabbis is also a member of a secular “heritage commission” set up by the Lithuanian government to cover for the cemetery project; and second, that there may have been serious manipulation of the American government’s U.S. Commission for the Preservation of the American Heritage Abroad which exists precisely to preserve such heritage sites as Jewish cemeteries on European Holocaust territory. One member of that Commission (the United States government’s) turned up as part of a delegation that visited the Lithuanian consul in New York to thank the Lithuanian government for preserving the cemetery, and his presence was flaunted in various media to imply a connection between the U.S. Commission and the group of rabbis that is so curiously praising a foreign government for supposedly “preserving a cemetery” that it is now working to desecrate with a twenty-five million dollar convention center.

The bilingual text of the Satmar Beth Din (Rabbinic Court) ruling released today, and signed by the Grand Rabbi, follows: 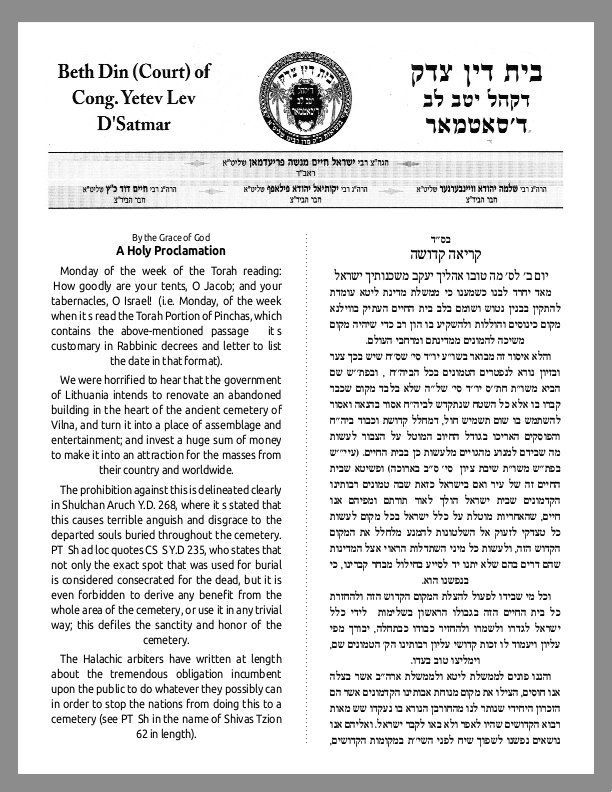 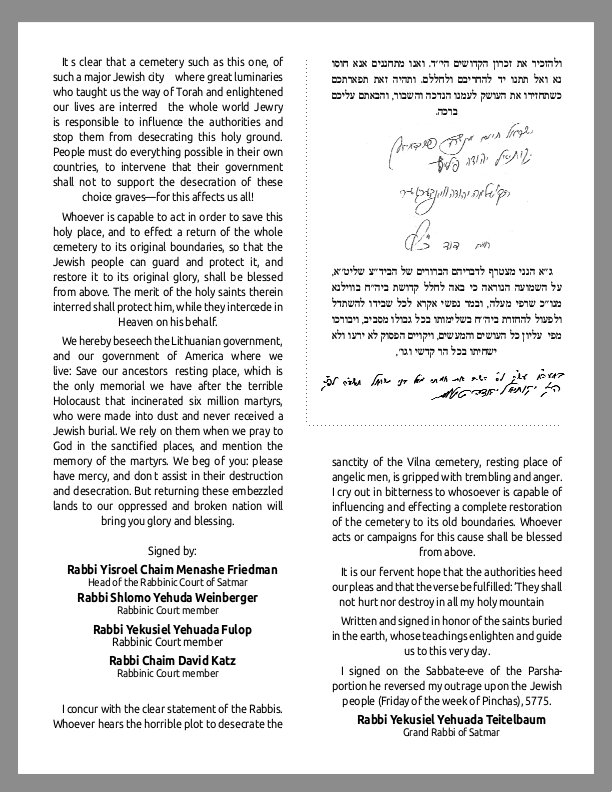