UPDATE 1: On 27 June 2011 at 3:31 PM (Vilnius time), the Israeli Embassy in Riga (responsible for Lithuania as well as Latvia) emailed DefendingHistory.com to say that Yad Vashem’s participation in the event has been cancelled. This was confirmed in a further email from Yad Vashem at 3:56 PM. In Vilnius, however, the name of Yad Vashem and its designated representative continue to appear on programs and brochures, giving the impression that the event enjoys the formal participation of Yad Vashem. See our public query to Yad Vashem.

Jewish Community of Lithuania responds to the campaign to glorify (in 2011)  the 1941 collaborationist structures.

The leafelts issued by the LAF (Lithuanian Activist Front) prior to the arrival of German forces.

An American journalist’s report on the film in progress [noting that only 5% of Lithuania’s Jews were killed during the weeks of the 1941 Provisional Government].

V. Bransdišauskas’s classic retort to A. Liekis’s attempt to sanitize and glorify the LAF murderers of Lithuanian Jewry.  Other works by Liekis listed by neo-fascist site.

The conference is scheduled for 29-30 June 2011 in the prestigious Eleventh of March Hall of the Lithuanian Parliament.

English translation of conference program.  PDF of the printed brochure in Lithuanian.

In addition to officials of the Genocide Research Center, speakers have been gleaned from the discredited ‘red-brown commission (from which Dr Yitzhak Arad, Professor Dov Levin, Sir Martin Gilbert, Professor Gershon Greenberg and Professor Konrad Kwiet all resigned on principle); of Vilnius University’s History Faculty, which dismissed the university’s one Jewish professor for opposing the state-sponsored persecution of Holocaust Survivors who had joined the anti-Nazi resistance; of various of the ‘government historians’ who are regularly dispatched to London, Warsaw and beyond to dish out ‘PR for Jewish and Western audiences’.  In the middle of these and more there is to found, sandwiched in the program, the entry for 3 PM: ‘The Collaborator: Traitor, Patriot or Murderer? Reflections on Collaboration’.  The lecturer-affiliation-place slot cites: ‘Dr. Aaron Shneyer, senior staff, Yad Vashem Memorial, Jerusalem (Israel)’.

The conference coincides with a series of state-sponsored and NGO organized events to honor the L.A.F. (Lithuanian Activist Front) on the seventieth anniversary of the outbreak of the Lithuanian Holocaust on 22 June 1941. It is part of an elaborate year-long scheme to commemorate both the victims of the Holocaust and the local perpetrators. The small and fragile but courageous Jewish community issued statements late last year protesting the glorification of collaborators (original Lithuanian text here), as well as the dual-track year of commemoration.

Yad Vashem’s international relations policies are not independent of the Israeli Foreign Ministry and current politics. See DefendingHistory.com’s ISRAEL page for some of the robust debates from recent times.

There are two Israeli citizens among the aged Holocaust survivors who  continue to be defamed by mainstream institutions in Lithuania, most recently the Lithuanian Human Rights Association, with ongoing kangaroo ‘pre-trial investigations’ by prosecutors that have not been publicly closed to this day.

One of the Israeli citizens is Dr Yitzhak Arad, a Holocaust survivor, veteran of the anti-Nazi partisan resistance, a hero of the Israeli War of Independence in 1948, and in later years an eminent Holocaust scholar who became the founding director of Yad Vashem.  Dr Arad, after being persuaded by very high Lithuanian politicians to join the country’s commission on Nazi and Soviet crimes, in a ruse to give it international legitimacy, was himself accused of ‘war crimes’ for having fought the Nazis (!) as a partisan after escaping the ghetto. Only ‘part’  of the investigation was eventually dropped, under massive international pressure, in an insulting press release from the state prosecution service that called for the public to come forward with ‘evidence’ against him. To this day the identity of the ‘expert historian’ quoted in the release is not known. Rumors abound that he is one  the historians being sent by the local Double Genocide Industry to read a paper at this June 29th 2011 conference.

The second is Dr Rachel Margolis who escaped the Vilna Ghetto to join the anti-Nazi partisans and after the war became a professor of biology who turned to Holocaust studies and education in the 1990s. Among her many achievements (and some believe she was targeted for this) is the rediscovery, decipherment and publication of Kazimierz Sakowicz’s eyewitness account of the Ponar massacres by enthusiastic locals. She lives in Rechovot and was honored at a Tel Aviv reception in June 2009.

The small and fragile but courageous Jewish Community of Lithuania has issued statements protesting the glorification of collaborators (original Lithuanian text here), as well as the dual-track year of commemoration.  Earlier, JCL protested the targeting of Holocaust survivors for antisemitically motivated legal harassment.

The defamation of survivors, as part of the campaign to obfuscate the distinction between perpetrators and victims — of which the June conference represents the flipside, glorification of the murderers — has drawn widespread international concern. Most recently, former British prime minister Gordon Brown honored Rachel Margolis, whose one last wish is to see her native Vilnius one more time, but she fears prosecutorial harassment should she return. Yad Vashem has yet to make a statement.

This conference is part of the disturbing trend to sanitize and glorify Baltic (and Ukrainian) Holocaust murderers. In the case of Lithuania, the L.A.F. initiated the campaign of slaughter of neighbors which was in fact the onset of the Lithuanian Holocaust.  Their leaflets, produced prior to the German invasion or the ‘Final Solution’ conference at Wannsee, clearly expressed the wish to murder their fellow citizens who were Jews, not neglecting to mention the abrogation of the charters of the great fourteenth century Grand Duke Witold (Vytautas).

Bold Lithuanian citizens (none of whom are part of this conference) have spoken out courageously against the glorification of Holocaust perpetrators: 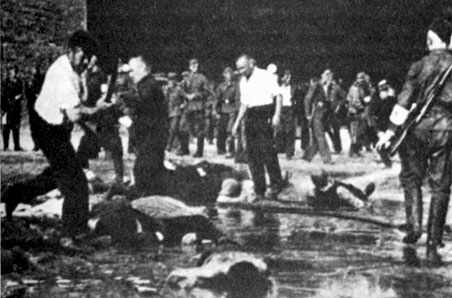 More of The Audience

‘Patriotic anti-Soviet fighters’ surround Jewish women in Kaunas (summer 1941) to send them to torture, humiliation and death at the Seventh Fort

Yitzhak Arad, “The ‘Final Solution’ in Lithuania in the Light of German Documentation”, Yad Vashem. At: http://www1.yadvashem.org/untoldstories/documents/studies/The_Final_Solution.pdf

Solomonas Atamukas, “The Hard Long Road to the Truth: On the Sixtieth Anniversary of the Holocaust in Lithuania” in Lituanus (Winter 2001). At: http://www.lituanus.org/2001/01_4_03.htm

Holocaust Map of Lithuania. At: http://www.dovidkatz.net/dovid/Lithuania/LT-Holocaust-small.html

Liudas Truska, “Contemporary attitudes toward the Holocaust in Lithuania” in Jews in Eastern Europe 2(45) 2001, pp. 5-26.  At:http://www.holocaustinthebaltics.com/LiudasTruska2001.pdf

Katy Miller-Korpi, “The Holocaust in the Baltics” in SCAND 344, May 1998. At: http://depts.washington.edu/baltic/papers/holocaust.html