In contrast to the recent march in Kaunas on February 16th, where five of the six personages on the lead banner were of alleged Holocaust collaborators and perpetrators, “only” two of the ten on today’s lead banner in Vilnius are alleged Holocaust collaborators. The fifth from the left is Adolfas Ramanauskas-Vanagas and the seventh is Vytautas Žemaitis, among the images above the words that translate “I am proud to be a Lithuanian.” 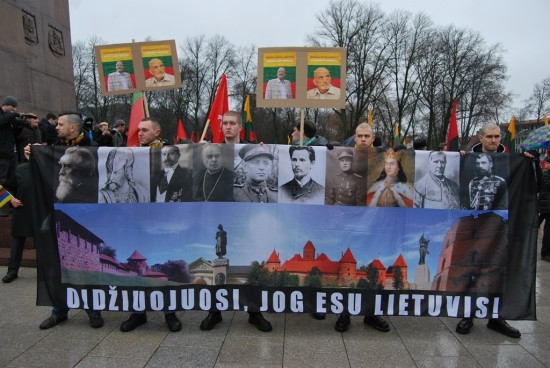 Many parts of Europe have recently seen a rise in neo-Nazi activity in response to the migration and refugee crises, and Lithuania is no exception. They play on human fears, extant social problems and divisions, and here too there were anti-European Union placards.

The police counted 1,500 marchers, but there were many more participants at different points. Xenophobic and racist slogans could be heard, accompanied by young women dressed in national costume. This year, skinheads marched at front of the column of people. They were joined by British neo-Nazis, Ukrainian ultranationalists and others. Dressed in black, members of the “White Power” organization carried posters with antisemitic caricatures.