VILNIUS—Yet again, an operative has allegedly been mobilized as fodder to personally attack a member of Lithuania’s small Jewish community as part of a campaign by some state-sponsored “official Jewish community leadership” to intimidate today’s Lithuanian Jews. If they stand up for a Jewish cemetery, and dare disagree with it becoming a national convention center, they will be smeared on the official website as liars, misleaders and secretly paid agents of some mysterious source of riches. This is a tragedy. It is part of a saga that will go down in Jewish history as possibly the worst case of state restitution for prewar Jewish property leading to disastrous results for the present and future of Jewish life on site, while providing glories and power for a tiny local elite and its “boards” of foreign fellow-travelers who relish coming to Vilnius for banquets and photo-ops with the high and mighty.

The latest effort was published earlier this week on the Lithuanian (PDF) and Russian (PDF) pages of the official community’s website. Perhaps they are too ashamed of the piece to post it in English; Westerners are not supposed to know that restitution funds are being abused by a state-sponsored community to defame local Jewish people who dare stand up for Jewish causes. It is after all meant to frighten local Jewish people to never dare speak out. A full English translation is available (as PDF). It accuses one of the most esteemed, idealistic, hard-working, modestly-living and dedicated members of the community, Ruta Bloshtein, author of the acclaimed international petition to save the Old Vilna Jewish Cemetery from becoming a convention center grounds, of “misleading tens of thousands of people” and consisting of “pure lies.” Before declaring at the end, Soviet commissar style, that the “discussion is closed,” the author addresses Ms. Bloshtein in the second person: “I have already started believing that your propaganda campaign has a vested material interest. Somebody is paying for this campaign in hope of material gain.” In the classic mode of Soviet propaganda, the truth is  turned upside down. It is the builders, property developers, state property bank, corrupt politicians in tow, convention center managers, and a handful of shameless Jewish quislings (in Lithuania and abroad) who have a “vested material interest” that has been exposed as monetary in the case of the London “grave trading rabbis” who offer “permissions” to desecrate Jewish cemeteries in cases where all other rabbis on the planet forbid it.

Ms. Bloshtein’s petition is in full agreement with the views of the democratically elected Vilnius Jewish Community (and affiliate communities nationwide), the major Litvak rabbis internationally, the chief rabbi of Lithuania, Chaim Burshtein, who was fired precisely for speaking up for the cemetery, the chief rabbis of Israel and of South Africa, twelve US congressmen, three senators, ten members of Israel’s Knesset, local and international voices of diverse background, and of course the 47,000 people from all over the world who have signed Ms. Bloshtein’s petition.

Simon Gurevich, elected head of the Vilnius Jewish Community tells the New York Times: “The Soviets didn’t build just coincidentally the Sports Palace there, they built it as part of an antisemitic campaign of destruction of Jewish sites. Is this Soviet despotism a part of the heritage we would like to keep?”

But the gaslighting in the attack on Ms. Bloshtein contains willful confusion of two distinct questions:

(1) Is the old Jewish cemetery the right place for the new national convention center project or should that project be moved to another venue so the cemetery may be restored, its buried respected, and the people of Lithuania able to  enjoy a sparkling new and morally clean place of pride?

(2) What is then to be done with the ruin of the Soviets sports palace, over which there are numerous opinions (this journal supports Prof. Leiman’s proposal).

To conflate the two questions disrespects readers’ right to know what is being talked about. For example, just one look at the title of one of the pieces cited, Vilnius-born Holocaust survivor Prof. Pinchos Fridberg’s “Dancing on Jewish Graves in Vilna” is more than enough to illustrate its stance on the first-cited, currently urgent, and conceptually primary issue at hand. More recently, a consensus has been growing, at times emanating from the observation that in a country that rightfully hates brutalist Soviet architecture and has demolished so much of it, the one “great exception” would be the ruin of a Soviet monstrosity right in the middle of the old Jewish cemetery, surrounded by thousands of extant graves (graves, not stones). 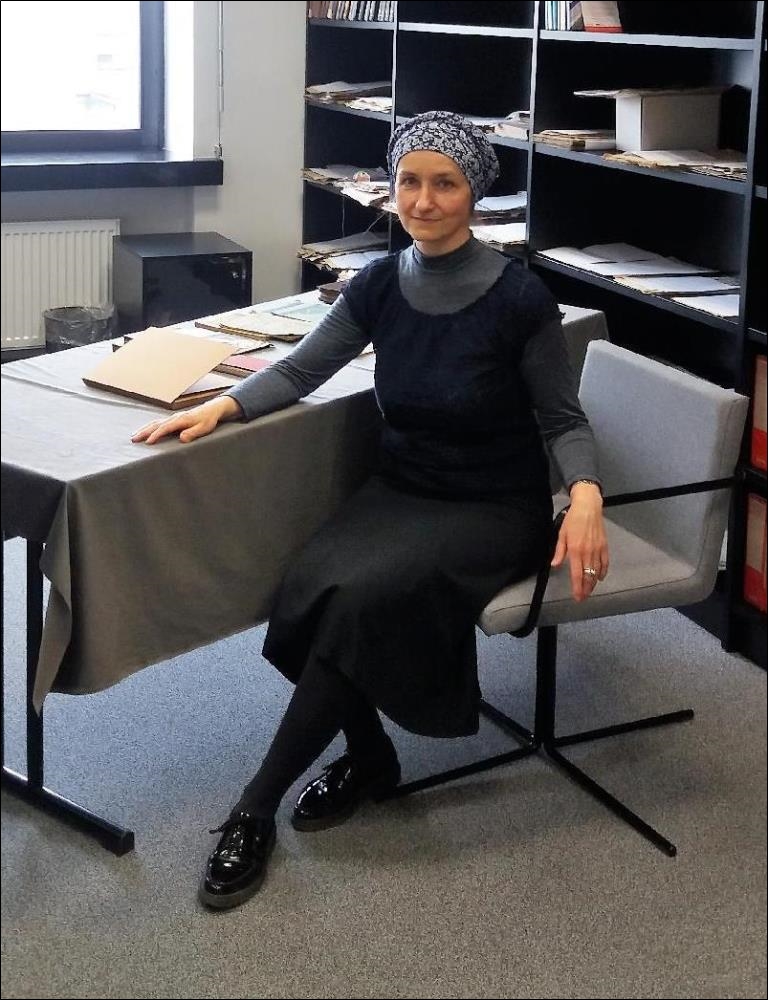 Ruta Bloshtein at her desk in Vilnius, at the Judaica department of the Martynas Mažvydas National Library where she has worked for years. A native of the city, she is a leading member of its small traditionally observant Jewish community. In addition to the Vilna cemetery petition, she is the author of numerous articles. A selection in English translation.

Moreover it appears on the lavish trilingual website funded from the administration and public relations budget provided by the Good Will Foundation with monies deriving from restitution for the religious properties of the nearly-annihilated Jewish religious civilization of pre-Holocaust Lithuania. Is it ethical for these funds to be used to personally attack one of the few Orthodox Jews left in Lithuania, a Vilnius-born, Vilnius-resident who has worked for years in the Judaica section of the Martynas Mažvydas National Library, for having the courage to launch the petition? Issues with the Good Will Foundation’s ethics were brought to the wider world several years ago by Vilnius’s Rabbi Sholom Ber Krinsky in a series of widely-read blogs. Incidentally, Rabbi Krinsky, resident in Vilnius a quarter century and intimately familiar with the issues, signed Ms. Bloshtein’s petition the day it was issued, as did Rabbi Kalev Krelin, then rabbi in Vilnius. Rabbi S.J. Feffer, based in Vilnius for many years, issued rabbinic edicts in Hebrew and English. Will the foreign members of the Good Will Foundation’s boards stand up and demand an apology, retraction, right of reply? Or will they sit back and bear moral responsibility as their names continue to be used to justify abuse of lavish funding to defame Jews who have the courage to stand up for Jewish causes? 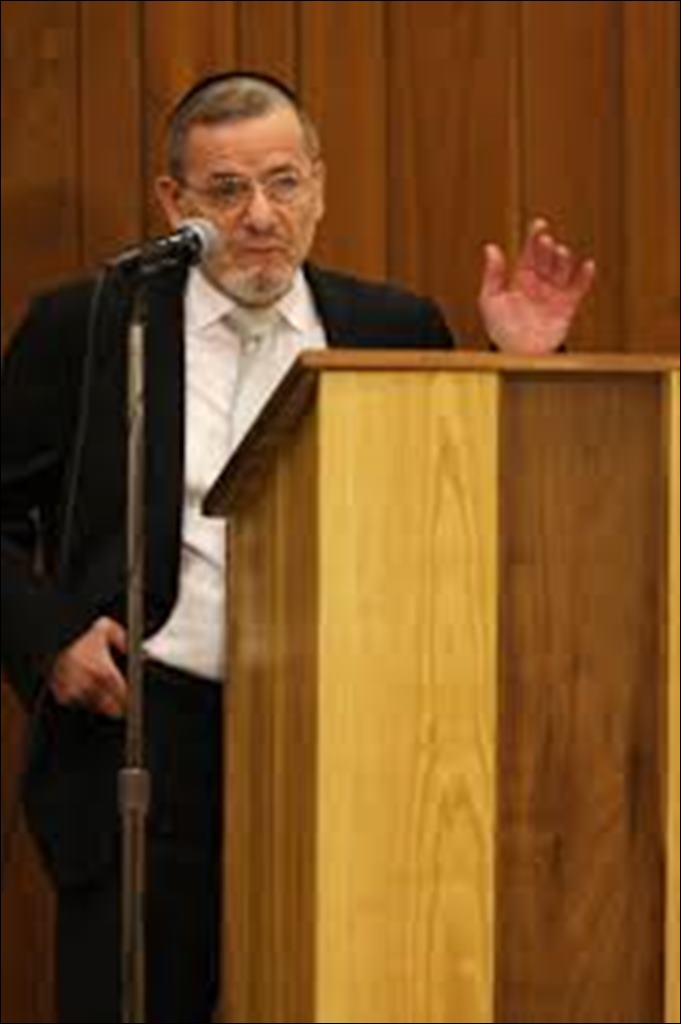 Where difference of opinion, and crass insulting, morphed dramatically into regrettable blatant dishonesty was the point at which the attacker positioned near his unsupported accusation a paragraph of praise for Prof. Shnayer Leiman, the major international historian of the Old Vilna Jewish Cemetery at Piramónt (in Šnipiškės), implying some kind of backing for the degradation of Ms. Bloshtein. No mention that it was indeed Prof. Leiman himself who boldly alerted the Jewish world to the travesty underway under the auspices of the attorney cum official head of the state-sponsored community in his now classic essay that appeared in the United States in The Seforim Blog (and was reprinted on these pages; his response to the official Jewish community chair is here). See also DH’s section of Prof. Leiman’s writings on this topic. He is also the main speaker on a video viewed by 21,000 people, which should now be seen by all interested in the debate.

“Surely, there is ample room in and around Vilnius for the construction of a Convention Center someplace other than smack in the center of historically, the single most important Jewish cemetery in Lithuania and one of the most important in all of Europe.”

It was, moreover, Professor Leiman whose active support, along with those of other leading scholars and rabbis around the world, helped turn thousands into tens of thousands of signatories. See his letter to the editor in the Orthodox journal Matzav shortly after the  launch of Ms. Bloshtein’s petition. A PDF follows (please use handles in upper-left hand corner to turn pages), and is available here.