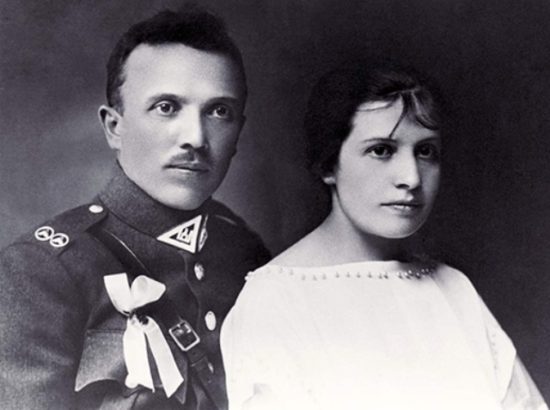 The Centenary celebrations of Lithuania‘s independence have provided an excellent occasion to remember those who participated in the Lithuanian Wars of Independence and created the Lithuanian state and its Armed Forces. Among them was Lieutenant Colonel Antanas Zubrys. Together with his wife, Dr. Matilda Zubrienė, they were awarded the Life Saving Cross in 1993 and recognized by Yad Vashem in 2014. as Righteous Among the Nations.

Antanas Zubrys was born on June 13th, 1883, in Gluosninkai village in the Russian Empire’s district of Simnas, Province of Suwałki (nowadays in the Alytus district of Lithuania).

He graduated from the Veiveriai Teachers’ Seminary in 1904 and the Vilna Teachers’ Institute in 1910. Until the First World War he worked as a teacher in Kučiūnai in Seinai County (nowadays Lazdijai district) and at the real-gymnasium of Ventspils. When World War I broke out, he was drafted into the Imperial Russian Army and served on the East Prussian and Carpathian front lines. He had graduated from the Odessa Infantry School in 1914.

Together with his Popular Peasants’ Union comrades, Antanas Zubrys took an active part in Lithuanian political life. From June 2nd, 1926, to April 12th, 1927, he was a member of the Third Seimas for the Lithuanian Popular Peasants’ Union (LVLS) faction together with President Kazys Grinius and Prime Minister Mykolas Sleževičius, who already back in 1918 had issued a proclamation calling on Lithuanian volunteers to defend their homeland against the invading Bolsheviks.

After the Third Seimas was dissolved, Zubrys was a member of the Kaunas Company of the Lithuanian Popular Peasants’ Union and a Special Affairs Officer for the Minister of National Defense.

For his voluntary service in the Wars of Independence, colonel Antanas Zubrys received a plot of land and, having retired in 1927, took up farming in Armališkės (Aukštoji Panemunė district).

During the Holocaust, this farm would serve Antanas Zubrys and his wife, Dr. Matilda Zubrienė, as a shelter for Jews.

When she emigrated to Israel in the 1970s, Fruma Gurvičienė (Frúme Gurvich), a doctor from Kaunas, took with her a lot of material on rescuers of Jews, including their addresses, that she had been collecting for several years. Some time after she settled in Israel, thank-you letters to rescuers of Jews for the lives that they had saved during the Holocaust started making their way to Lithuania. These letters were signed by Gurvičienė herself as well as the writers Icchokas Meras and Mejeris Elinas. The letters from far-away Israel were a genuine surprise, especially since they were written in the times when the topic of rescued Jews was not popular. This gesture of respect brought joy to many rescuers, or to their children and relatives, if they were no longer alive. Antanas Zubrys died in 1951, Matilda Zubrienė in 1970 and it was their children who received the warm letters of the most profound gratitude.

In her article “Spring of 1944” (“1944 metų pavasaris”) in Soldiers Without Guns (“Ir be ginklo kariai”), edited by Sofija Binkienė (Vilnius: published by Mintis, 1967), Fruma Gurvičienė (Frúme Gurvich) lays bare the despair of the people behind the barbed wire of the Kovno Ghetto when, after the “children’s Aktion” in the Šiauliai (Shavl) Ghetto on November 5th, 1943, they realized that mortal danger looming, it seemed, inevitable, over all Jewish children. Sadly, only a minority of people imprisoned in the Kovno Ghetto managed to find acquaintances from before the war who would take in and hide their children.

Having survived the horrible “Children’s Aktion” in the Kovno Ghetto on March 27th and 28th, 1944, Frúme Gurvich decided to look for shelter for her five-year-old niece Naomi as well as her daughters, twelve-year-old Etta and sixteen-year-old Bella. She wandered through her home city of Kaunas, now hostile and alien, and first of all contacted her former colleagues, Kaunas doctors. Sadly, some did not have enough courage to even look her in the eye.  Some slammed their doors in her face.  Fruma almost succumbed to the terrible despair. But then, a miracle happened.

To the end of my days, I will not forget the way I was taken in by Dr. Matilda Zubrienė and her husband Antanas Zubrys. How they calmed me down and even gently scolded me, parent-like, for not coming to them straight away. I could not believe my ears. They agreed to take in one of my daughters and disguise her as a shepherdess in the countryside. I warned them, once more, that my daughters were brunettes and that they were easily recognizable. To which they answered: “Is it their fault that their hair is black?” How delighted I was to hear such warm words. How much hope and trust in humankind they brought me.

Since Antanas and Matilda Zubrys’ house stood on Donelaičio Street in the center of Kaunas, they decided to take Gurvičienė’s daughter Etta to a safer spot: their own farm in Armališkės. There, Antanas Zubrys had already been hiding Haris Goldbergas, son of a Kaunas lawyer, for a period. Those wartime days in Armališkės with Eta Gurvičiūtė and Haris Goldbergas are well remembered by Aldona Bogdanienė, daughter of Antanas and Matilda Zubrys, who is still with us today.

Dr. Fruma Gurvičienė’s risky wanderings through Nazi-occupied Kaunas in search of rescuers for her girls had a happy ending. Her little niece Naomi was with no hesitation accepted by her former course mate, Dr. Marija Butkevičienė: together with her own daughter Ona, and and her son Povilas. They cared for the little girl for some six months, up to the autumn of 1944. And, the elder daughter Bella was rescued by Dr. Ona Landsbergienė, the chief doctor at the Department of Ophthalmology at Kaunas Clinic. After having carefully listened to Fruma’s plea, she gave a laconic answer: “Let her come.” From the Landsbergis’ family home in Kaunas, Bella was moved to their summer house in Kačerginė, where she was cared for  by all members of the family. 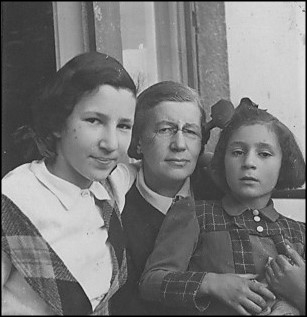 Dr. Matilda Zubrienė, obstetrician-gynecologist and wife of Reserve Colonel of the Lithuanian Armed Forces Antanas Zubrys, was the chief doctor of the Women’s Ward at Kaunas Red Cross Hospital from 1940 to 1946. Thanks to her, the talented contemporary poet Violeta Palčinskaitė came into this world: her mother Sara Palčinskienė (née Shulgaser) was hiding with her husband’s family throughout the war but, while pregnant with Violeta, fell gravely ill and was secretly brought to the hospital on Miško Street, where Matilda Zubrienė worked. The doctor knew all the details but, risking her own and her family members’ lives, decided to operate on Sara Palčinskienė nevertheless, praying that the patient would not start speaking in her native tongue while under anaesthesia. Both the future poet Violeta Palčinskaitė and her mother survived the surgery.

When talking about Antanas Zubrys and his activities during the first years of Lithuanian Independence, we cannot avoid mentioning one of his comrades — the leader of the Lithuanian Popular Peasants’ Union, member of the Constituent Assembly as well as of the First, Second, and Third Seimas, and President of the Republic of Lithuania Kazys Grinius. On June 7th, 1926, the Third Seimas elected Kazys Grinius the President of the Republic of Lithuania. His term lasted only until the coup of December 17, 1926, when he was forced to resign from office. President Grinius worked on public healthcare issues and was a defender of civil rights and ethnic minorities’ freedom of self-determination. From June 19th, 1920, to February 2nd, 1922, he was the prime minister in the Sixth Government.

President Grinius’s merits to the emerging state of Lithuania have been written about by many Lithuanian historians. Nevertheless, his humanitarian activities and his help to the Kovno Ghetto prisoners during the Second World War remained unknown to the public for quite some time. In 2015, based on the testimony of one of the leaders of the Kaunas Ghetto Antifascist Struggle Organization Dmitrijus Gelpernas (Dmitry Gelpern), the Commission for the Designation of the Righteous in Yad Vashem Holocaust Remembrance Center recognized Kazys Grinius and Kristina Griniuvienė as Righteous Among the Nations.

All these people passed the most important examination: the examination of humanity; not with their words but with their deeds. Those deeds proved their dedication to defending our fellow citizens who were being persecuted and murdered during the Nazi occupation. This we must not forget.

See also the author’s 2019 essay on Jonas Paulavicius, and the Defending History community’s conceptualitzation of the naming of a year in the context of current East European issues.