VILNIUS—A peaceful gathering will be held this Sunday, 12 January,  AT 2 PM to celebrate the sanctity of the Old Vilna Jewish Cemetery at Piramónt, in today’s Šnipiškės district across the river from central Vilnius. The event will be organized by Vieninga Lietuva (United Lithaunia), a group of Lithuanians and Jews working together to make bona fide  progress by dialogue and a search for basic truths —  rather than just score PR or political points — concerning the issues at hand. In this case, the group has asked for the new national convention center project to be moved away from the five hundred year old Old Vilna Jewish Cemetery, which could be lovingly restored. The initiative’s website,  Vieninga Lietuva describes the event in detail, and the event’s poster appears below.

In the run-up to Sunday’s event, the event’s organizer, Dr Andrius Kulikauskas, founder and editor of Vieninga Lietuva, has issued a detailed press release published at BNS, comprising images and video, along with his nuanced take on a number of the complex issues in play [update: it has appeared also in Vakarų Ekspresas].

“On January 12, 2020, 14:00-16:00, a peaceful gathering will take place between Rinktinės Street and the Vilnius Sports Palace to get to know each other and discuss how to defend the sanctity of Vilnius’s oldest Jewish cemetery.  We will recall the Soviet desecration of the cemetery as well as other Soviet crimes, notably the murders of peaceful defenders of Lithuania’s independence on January 13, 1991. This will be the first of monthly meetings at the site to send a message to potential operators of any Conference Center at the site that they will face a decade of protests by Lithuania’s dissidents, activists and concerned citizens.” 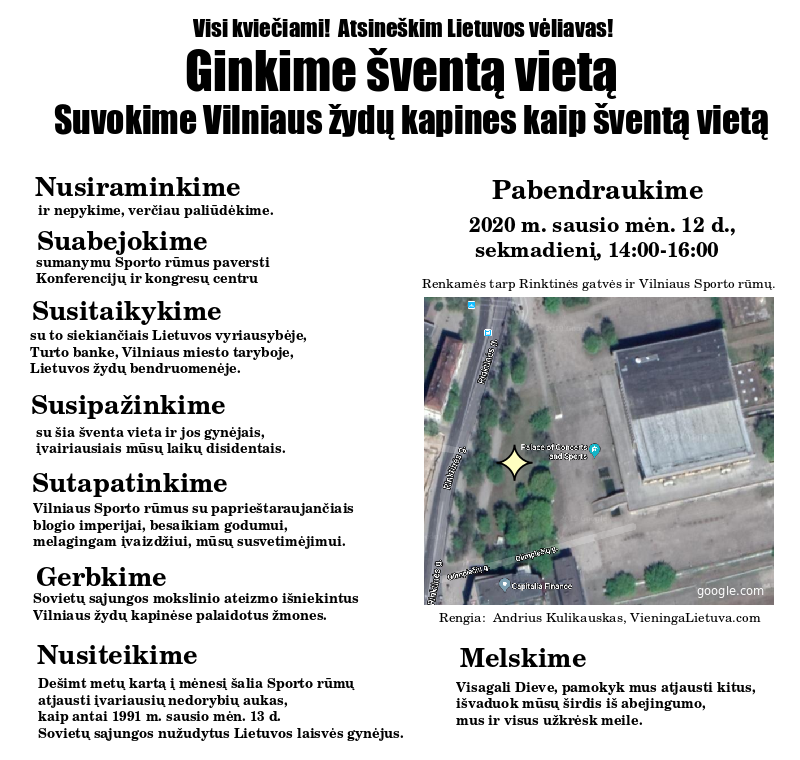