ARE YOU REALLY COMFORTABLE WITH

(1) continued public support for the 2008 Prague Declaration (including its posting on the commission website), and continued failure to mention the existence of the Seventy Years Declaration? (background). 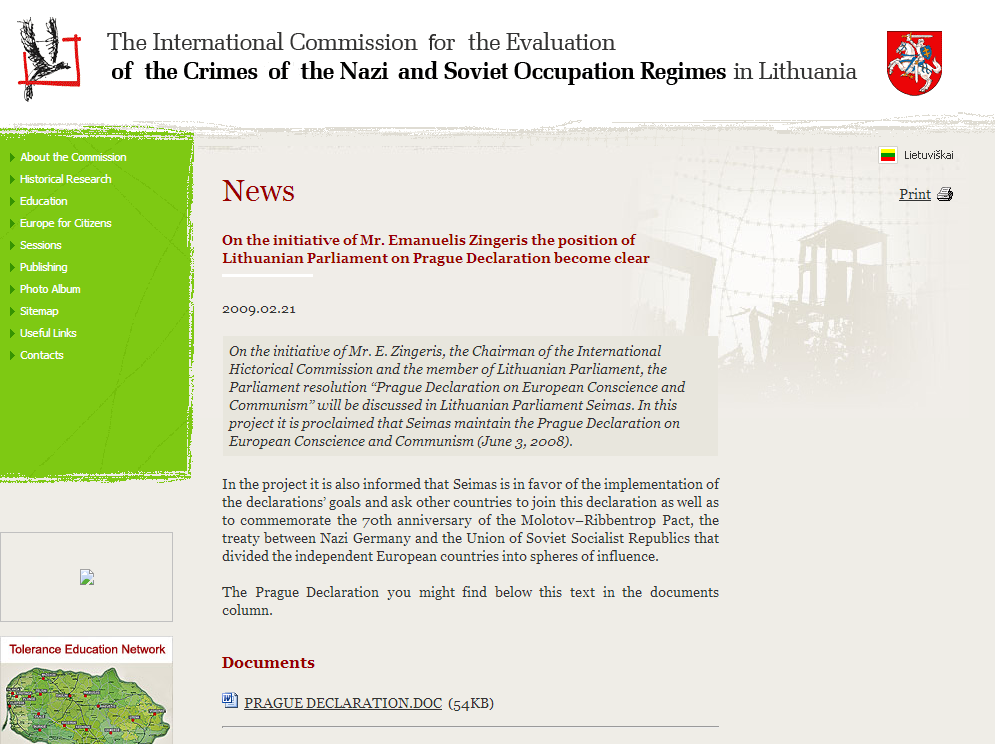 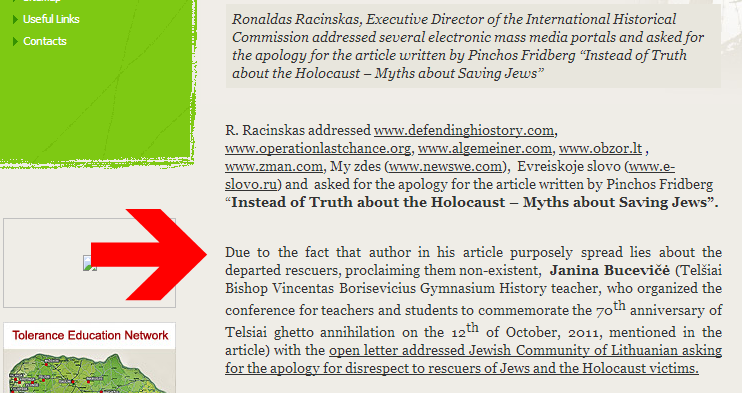 (3) continued failure to publicly condemn the antisemitic prosecutorial defamation of Holocaust survivor and scholar Dr. Yitzhak Arad, a founding member of your own commission? Of Holocaust survivor and scholar Dr. Rachel Margolis? (background). Of survivor leader Joseph Melamed? Note: The country’s small and fragile Jewish Community spoke out. And Yitzhak Arad spoke out. Part of the commission did write to Dr. Arad in October 2013, but in the absence of a written state apology the defamation continues in the media, in academic books and on the internet. Dr. Margolis passed away at the summer of 2015, failing to secure her last wish of one more visit to her native Vilna, which she expressed on many occasions.

(5) continued inclusion of the Vilnius-based Genocide Center (and its posh city-center Museum), and of local nationalist scholars intent on sanitizing and glorifying the Lithuanian Activist Front (LAF) Holocaust perpetrators and the Provisional Government’s (PG) facilitation of the onset of genocide? Section on Genocide Center (background). One of the current members of the Commission was a Genocide Center official when he helped launch the odious campaign of destruction against Yitzhak Arad (see final paragraph in the original Respublika article used to launch the campaign in 2006). 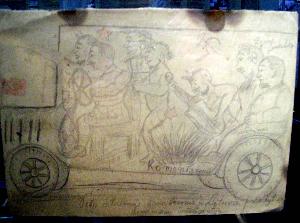 (6) continued failure to publicly oppose the same sponsoring state’s provision of funding for the honoring of Holocaust perpetrators, inter alia by street names and public shrines, and the 2012 reburial with full honors of the 1941 Nazi puppet prime minister who personally signed papers confirming orders for sending his city’s Jews first to a death camp (the Seventh Fort), and then to the Kaunas (Kovno) ghetto? (background). Note: some members of the Lithuanian Parliament spoke out with extraordinary courage. By contrast a Yale professor and the director of Yivo helped camouflage the reburial at a concurrent symposium on the Holocaust that did not even mention it.

(7) presentations for elite local Lithuanian audiences that differ remarkably from the tone and content of spiels for foreign and Jewish groups? (background)

(8) instrumentalization of the commission in non-academic, non-educational geopolitical disputes? (The Commission was formerly attached to the prime minister’s office and moved in 2012 to the president’s jurisdiction to guarantee funding after that year’s elections but remains at the heart of political activity; its chairman and executive director are closely tied to local right-wing politics; conclusions in volumes published have been signed by the Commission’s political leaders in true Soviet style…)

(11) the resignations on principle from the Commission (and its associated committees) of Sir Martin Gilbert and professors Gershon Greenberg, Konrad Kwiet, and Dov Levin?

(12) the 2015 public statement by Commission’s executive director, in a German documentary film, on Fania Yocheles Brantsovsky and the Double Genocide movement’s theory of victims and perpetrators as “Holocaust Education” . . .(12) the winter 2015-2016 attempts by the Genocide Center, whose history director is a prime member of the Commission, to sanitize major Holocaust perpetrators in an effort to salvage them as “national heroes”…