Posted on 1 August 2010 by Defending History


‘The Museum of Genocide Victims’

A summer 2010 visit to a major Baltic tourist attraction.

THE QUESTION: Can you imagine a Museum of Genocide Victims — in the capital of a country with the highest proportion in Europe of Holocaust genocide of its Jewish population — that does not mention the word Holocaust or the name of the nearby infamous mass-killing site, where 100,000 civilians were murdered? That avoids any reference to the actual genocide that occurred in the country? That includes antisemitic exhibits with no commentary? That is state-sponsored in the capital of a European Union member state?

Following the publication of this page in the summer of 2010 and protests from many parts of the world, a small exhibit on the Holocaust was opened in one of the basement cells of the Genocide Museum in October 2011. The new exhibit glorifies the LAF and other Nazi collaborators while failing to mention their participation in the Holocaust. Full coverage here.

The Genocide Museum is controlled by the Genocide Center. See our page and section on the center.

THE ANSWER: The Double Genocide Industry’s lamentable Double Game is in play here. While trying to convince the European Parliament to adopt the 2008 Prague Declaration and other legislation that would ‘equalize’ Nazi and Soviet crimes as a matter of European law, the domestic agenda in the Baltics is to redefine and apply the term genocide to Soviet crimes alone, even while pursuing foreign support, as a kind of decoy to the foregoing, suma chutzpah maxima — for projects on Holocaust education, Jewish and Yiddish events, and plaques and statues.

‘The inside of the Genocide Victims’ Museum presents several problems for a photographer. The exhibits on display are both dimly lit and kept behind highly reflective glass making using flash completely impossible. The other problem is that photography is forbidden, a somewhat curious rule for a public museum in a European Union capital city. Accordingly, the photographs I took of the inside of the museum have an eerie, almost ghost-like quality that I hope reflect the technical and ethical issues cited on this page in an apposite and, dare I say, ironic manner.’ 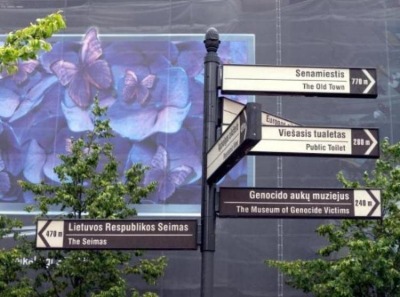 One of the city’s tourist information plaques on history, mounted on a pole outside the museum, correctly describes the building’s cruel NKVD/KGB history, but omits mentioning that it was also Gestapo headquarters during the Holocaust, where the genocide of some 100,000 residents of the Vilnius area was coordinated.  JPEG here © R. Schofield. 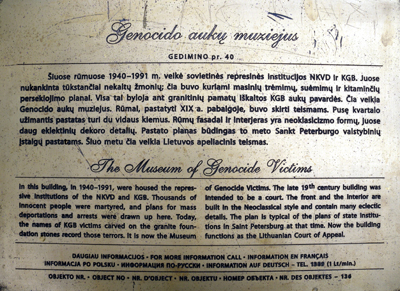 Entrance to The Museum of Genocide Victims… 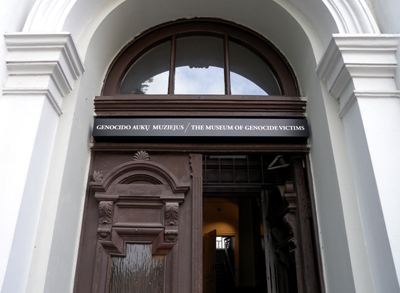 Exhibit: a postwar cartoon featuring a Soviet jeep driven by Lenin, Stalin, ― and ‘žydas Jenkelkė’ (‘the Jew Yankelke’). Dating from after the Holocaust. No descriptive or critical reference in the Lithuanian and English captions below to the exhibit’s antisemitic content. High-res JPEG here ©  R. Schofield.

Exhibit: Stalin’s economic bubbles deriving from a soap dish labeled with a Jewish star. Note also the person to his left. No descriptive or critical reference to the antisemitic content. High-res JPEG here © R. Schofield. 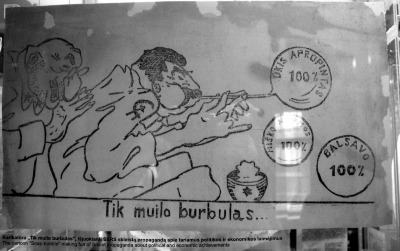 Exhibit: A rather Jewish looking figure as ‘representative’ of the Soviet Reprisal Squads. For students of antisemitic iconography it is noteworthy that the classic Religious Jew image continued to serve its medieval purpose even in post-Holocaust times (alongside representations of the Communist Jew, as in the preceding images). High-res JPEG here © R. Schofield. 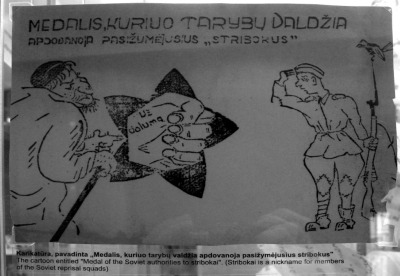 Exhibit: a summary of the ‘anti-Soviet revolt of June 1941’ with no mention of the major ‘achievement’ of the ‘rebels’ ― the unleashing of savagery against Jewish civilians (i.e. Lithuanian citizens who were Jewish) across the country in the days before the actual arrival of German forces, days that go down in history as the onset of the Lithuanian Holocaust. Historians will be astounded at the misimpression left by the exhibit that indicates that the Soviet army fled this ‘rebellion’ by the Lithuanian Activist Front and other local fascist collaborationist organizations.  Of course the Soviet army was fleeing Germany’s Operation Barbarossa invasion, here as in Belarus, the former eastern Poland, Estonia, Latvia, Ukraine etc.  High-res JPEG here © R. Schofield. 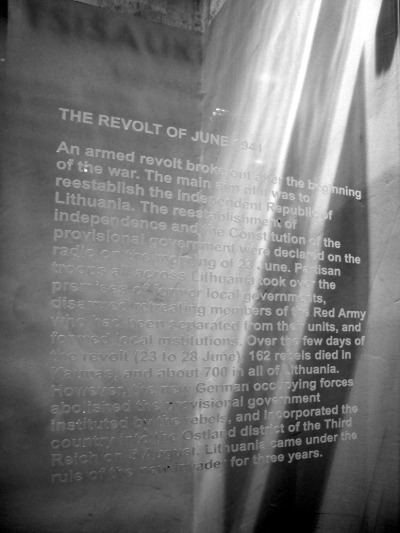 The Comparison Chart: After many complaints about the exclusion of the Holocaust in a museum of genocide at ground zero of the East European Holocaust, a comparison chart for ‘Losses’ was added in the rear hallway, between the electricity box and the toilet. With no mention of the words ‘Holocaust’ or ‘Ponar’  (Paneriai), it offers a ‘mathematical equivalence table’ equating 200,000 massacred Jewish civilians (around 95% of the country’s Jewish population, most of them killed in the second half of 1941, the remainder in 1942-44) to Lithuanian citizens [as if the Jewish population murdered did not comprise citizens] ‘arrested, imprisoned, interrogated’ by the Soviets over nearly half a century (1940-41 and 1944-90), which magically comes to the precise same figure. No sources provided. Also, no mention that before the Holocaust proportionately more Jews (i.e. Jewish citizens of Lithuania) were deported by the Soviets to Siberia than any other group. The mix-and-match term ‘losses’ seems to be in the spirit of Double Genocide but without in this chart daring to pretend that genocide could refer to ‘arrested, imprisoned, interrogated’.  High-res JPEG here © R. Schofield. 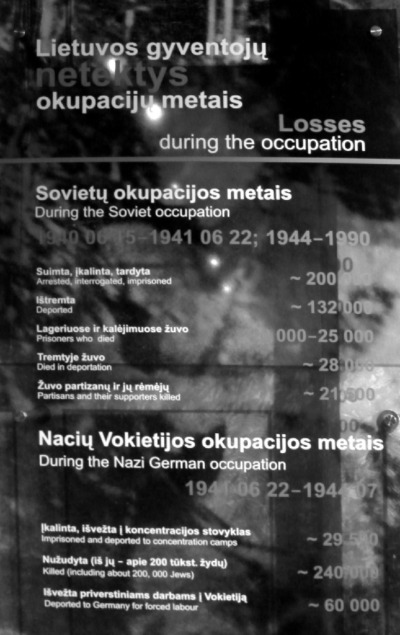 From the Genocide Museum’s  2008 Exhibition on the Ukrainian famine ― the Holodomor, the only word starting with H-O-L-O in this  museum, which is situated within ground zero of the East European Holocaust. 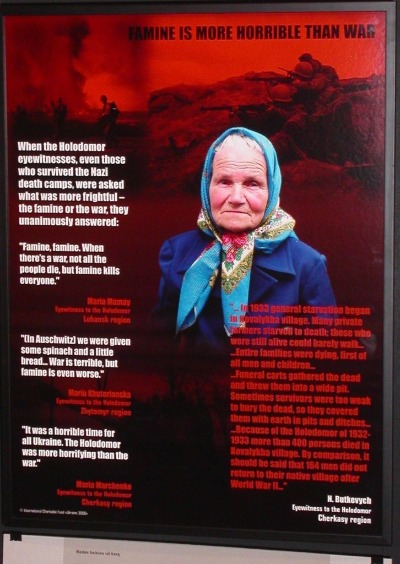