VILNIUS—In recent weeks, Lithuania’s Jewish community has been shaken by a number of vicious attacks against various of its members, apparently written by operatives out to provoke “senseless interethnic strife and division” who have infiltrated to echelons of the official community’s power structures, and published personal invective replete with “demonstrable falsehoods” under the imprimatur not of any named author but of the “Lithuanian Jewish Community” per se (examples here, here, and here). Against that backdrop many Jews and Lithuanians alike, who enjoy some of the best daily relations of any two groups in Eastern Europe, have been finding it necessary to stress that Lithuanian-Jewish relations are excellent and will not be disturbed by such mischief makers (see also today’s JTA report, and a 2015 paper by this journal’s editor). The ongoing passionate debates about the Holocaust, “Double Genocide”, defamation of Jewish partisans, glorification of local Nazi collaborators, city-center neo-Nazi marches on independence days, plans to have a new national convention center in the heart of the old Jewish cemetery, and the fair allocation of restitution funds, are not disputes between “Jews and Lithuanians”: there are, at least locally, proponents from both groups on all sides of each of these debates and various others.

Julius Norwilla’s speech at the Lithuanian Embassy in Tel Aviv: in English, in Lithuanian

Against this backdrop, it was a major advance that a small but high-powered delegation of Litvak rabbinic leaders in Israel, led by Rabbi L. Kahaneman, dean of the fabled Pónevezh Yeshiva in Bnai Brak (whose name is the Yiddish name of its origin town, now Panevėžys in Lithuania), took care to include in its delegation to meet the Lithuanian ambassador to Israel, His Excellency Edminas Bagdonas, not only Israeli rabbis but also a non-Jewish citizen of Lithuania, Julius Norwilla. Mr. Norwilla is an active intellectual voice in human rights, minority and Jewish causes. He was educated in Kaunas, Oxford, Geneva and Tallinn, and has in recent years been concentrating on Yiddish language and literature. A former protestant pastor, he is a regular contributor to Defending History, perhaps best known for his call for his old church finally to remove with dignity its steps made of Jewish gravestones. 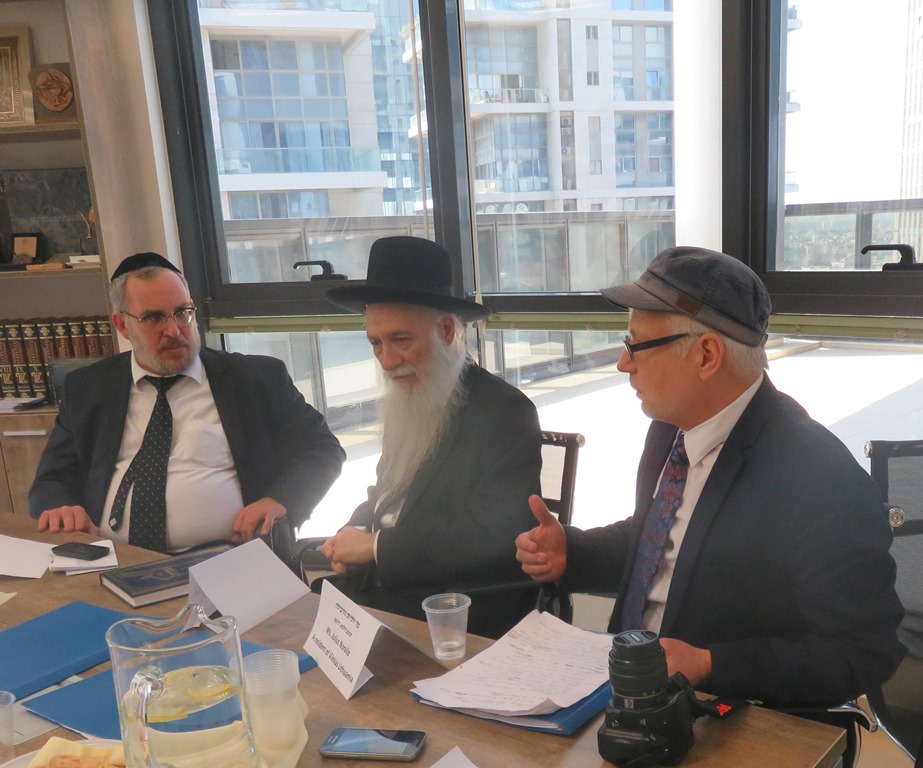 At Thursday’s meeting with the Lithuanian ambassador to Israel, the major rabbis spoke about their own Litvak heritage, noting in more than one case that they use almost every day the books written by people still buried at Piramónt, the old Vilna Jewish cemetery, including the Kháyey Ódom (Chayei Adam), the classic book summarizing Jewish law for a person’s life written by Avrom Dantsig (Abraham Danzig, 1748—1820). There were polite mentions that the cemetery land had been purchased in perpetuity and belonged to the people buried there, who have the human right to lie in peace. The ambassador and two consuls in attendance listened with great respect and interest, and put forward important questions and observations. It is understood that an audio file of the meeting may be made available at some point online. 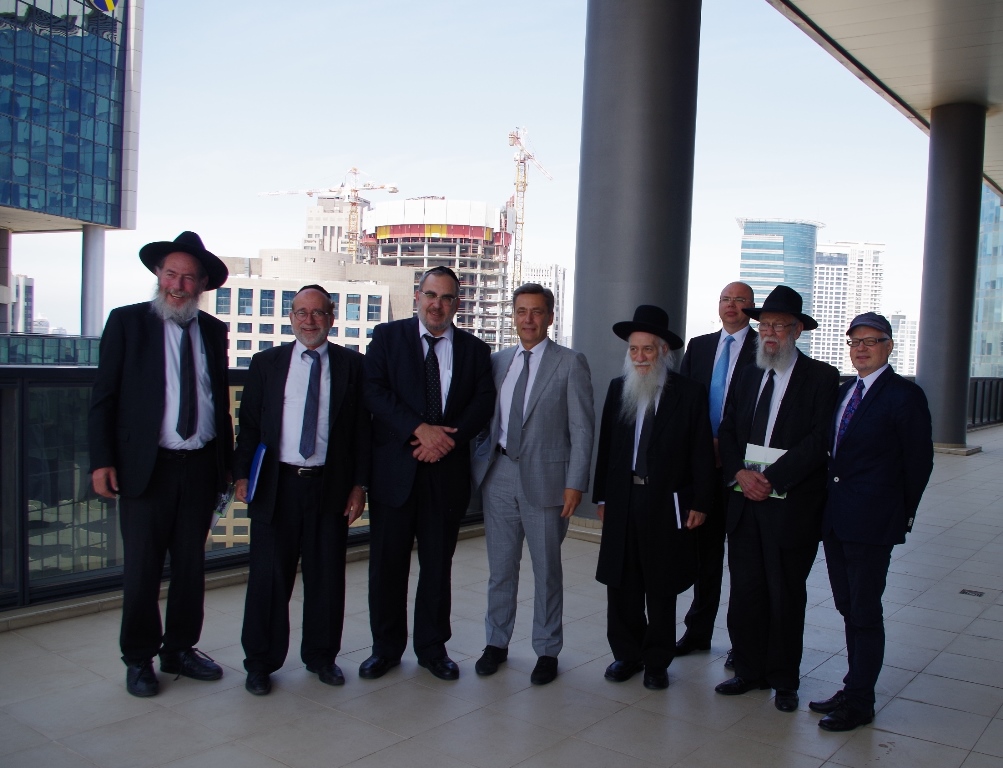 But the potentially game-changing event Thursday was the inclusion in the delegation of a non-Jewish Lithuanian author, a born and proud Lithuanian citizen, who pointed out that the honor of Lithuania calls for the “national convention center in the old Jewish cemetery” project to be dropped, for the convention center to be moved elsewhere and for the cemetery to be restored. In that connection, Mr. Norwilla stressed a point that is often overlooked or shoved to the back of the queue: that the current “monstrosity” in the center of the cemetery, the Soviet-built “sports palace” that is now a hated and ugly ruin, needs to come down. The excuse for not taking it down, and indeed for the “need to turn it into the heart of a new convention center” is that the authorities made it a “national heritage object” back in 2006, in the heat of that year’s dispute over two buildings built right on top of another part of the cemetery, in other words, as a kind of guarantee that the cemetery would be commercialized and desecrated to its last inches.

Mr. Norwilla has pointed out, following Professor Shnayer Leiman’s lead, that the national heritage designation simply needs to be undone, so that the Soviet eyesore, in a city where Soviet eyesores are hated and routinely removed, can be taken down and the cemetery restored. Mr. Norwilla himself helped arrange for a Vilnius artist to produce a first visualization of the site as a restored cemetery that would bring honor, prestige, good will, tourism and investment to Lithuania. The full text of Mr. Norwilla’s remarks is now online. 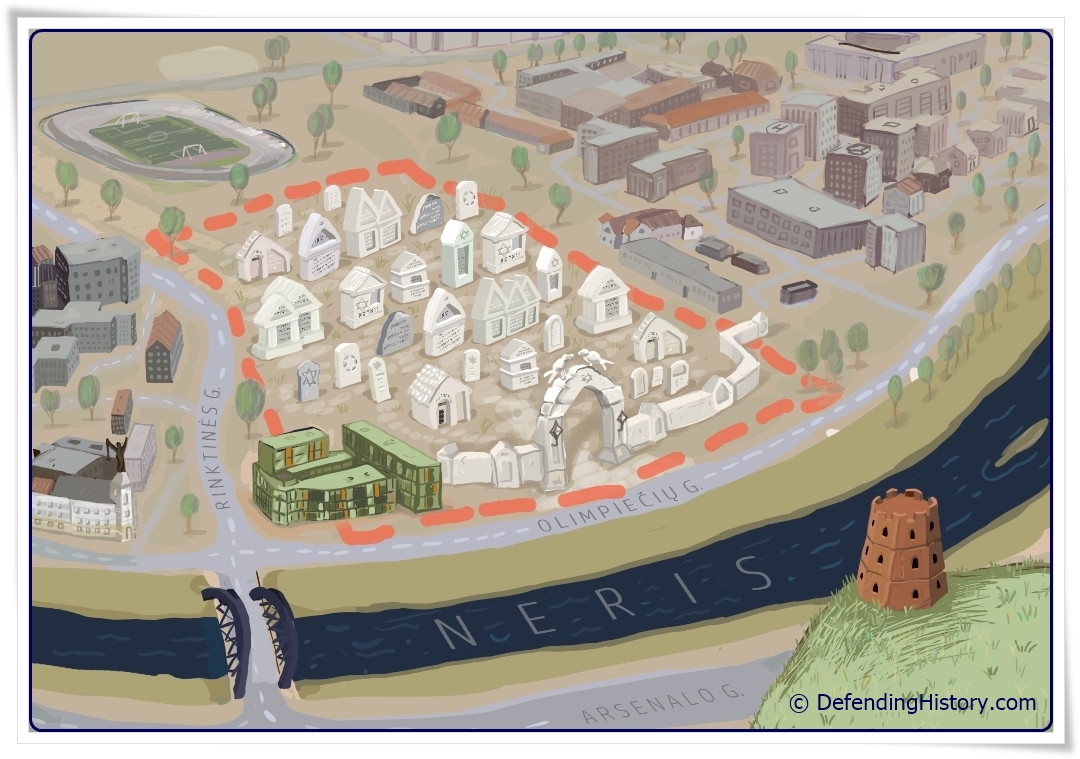 A Lithuanian artist in Vilnius produces a first visualization of restored Piramónt as a point of departure for future discussion.

The handsome folder prepared by Chagit Fried, presented to the ambassador and the consuls in attendance, included the following materials: Rabbi Chaim Burshtein’s August 2015 statement (which, incidentally, resulted in his dismissal after eleven years of service); August 2015 appeal to the Lithuanian government by twelve major Litvak tradition rabbis; July 2015 article in Yated Ne’eman by Professor Bernard Fryshman; Times of Israel article by Vilnius native, Holocaust survivor and current resident Professor Pinchos Fridberg; Pastor Michael Maass’s appeal for the cemetery; the text of Ruta Bloshtein’s petition in Lithuanian, and the text in English; 2015 article in Yeshiva World News on the delegation of major Litvak (and other) rabbis who came to Vilnius to plead with the mayor of Vilnius and government officials; excerpt from the book on the history of the cemetery by Isreal Klausner in 1935; excerpt from a history of the cemetery by Elmantas Meilus; Julius Norwilla’s 2015 appeal to the mayor of Vilnius on the state of Jewish graves in Vilnius.