NEW YORK—Asra Kadisha, the international organization that protects Jewish cemeteries from desecration, today released a call signed by twelve leading róshey yeshíve (heads of yeshivas) in the United States concerning the old Vilna Jewish cemetery known to generations of Vilna Jews as Piramónt, in the Šnipiškės (Yiddish: Shnípishok) district of today’s Vilnius. The city is capital of Lithuania, an EU and NATO member state and a successful democracy with a growing economy.

Today’s bilingual document, in Hebrew and English, notes that “the cemetery was established in 1487 and houses the remains of tens of thousands of Jews including some of the greatest scholars and sages of the Jewish people.” It goes on to “protest any use of this sacred site other than for prayer and solemn reflection.”

The following image (as PDF) comes from today’s print edition of Hamodia, which also carries an article by Rafael Hoffman (a day earlier in the online edition) that makes clear the magnitude of rabbinic opposition to the project to build a congress and entertainment complex in the heart of the cemetery (English PDF). The document’s signatories, the top Litvak deans of rabbinical academies (yeshivas) in America, are today cultural heir to the grand religious traditions of Lithuanian Jewry built over centuries by thousands of the people buried at the old Vilna cemetery that has been much desecrated over the last decade and is now under renewed threat. One of the yeshivas is called Telshe Yeshiva (Yiddish: Télzer yeshíve), retaining the name of its Lithuanian city of origin (Lithuanian: Telšiai; Yiddish: Telz). 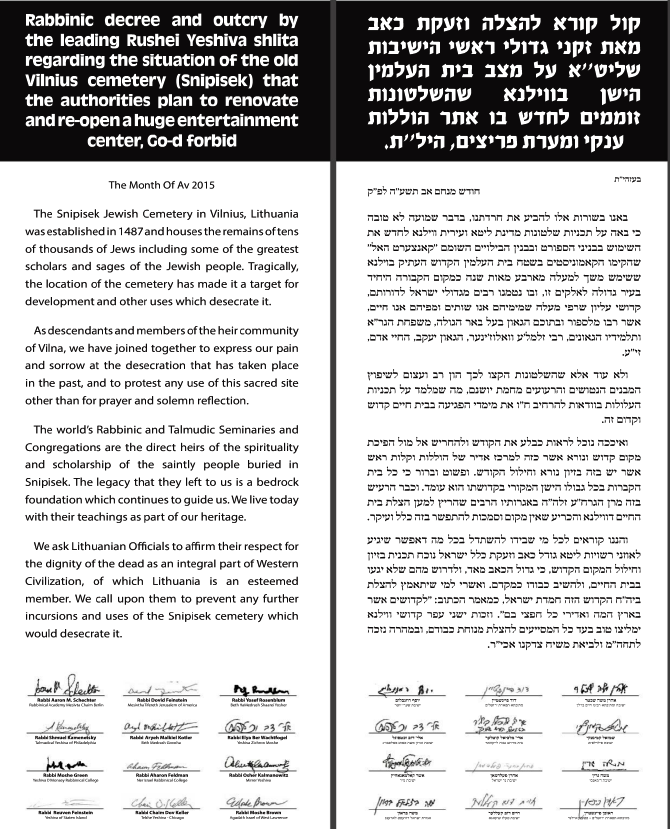