We won our battle. The strategy of open air services then proved to be politically effective and the historical church building in Vilnius have been passed to the church: in January 1990 the first worship service was held inside the building on Pylimo Street 18, which had for many years been known as the “Chronika” movie theater. The decades of profanation of our church buildings left their mark. But thanks to the generous and long-term assistance from the worldwide Reformed Christian Church, its original beauty was destroyed and things, it seemed, were set right. The structure was home to solemn hours of Reformed Christian worship service for which it had been erected in the first place. 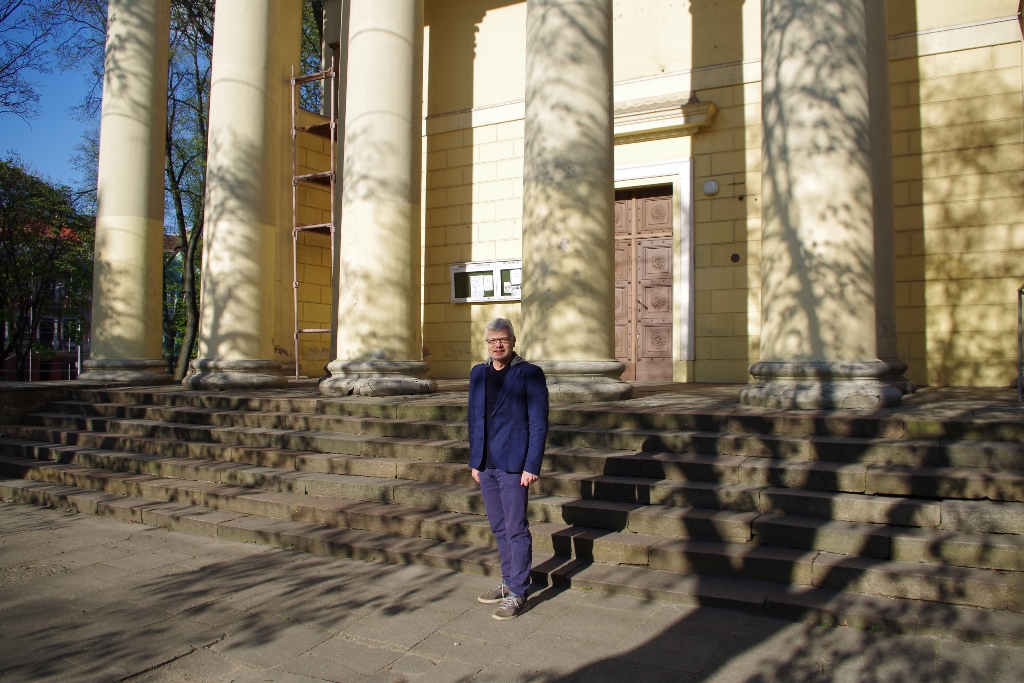 Pastor Julius Norvila of the Reformed Evangelical Church standing in front of the church steps constructed in the Soviet period of pilfered old Jewish gravestones from one of the two old Jewish cemeteries in Vilnius. He is the first Christian leader to speak out publicly on the issue. He is not the pastor at this church.

What we didn’t know in 1990, when we began to pray inside our historic church, was the story of the very wide and impressive looking set of entrance steps in front, leading into our church.

After the war, it didn’t take long before the Soviet regime destroyed first one of the two great old Jewish cemeteries in Vilnius, at Piramónt (now in the Šnipiškes district), and then the second, at Užupis. The pilfered stones were used for many purposes, often hidden within ballast, walls and other architectural edifices, and sometimes with the old Jewish letters entirely visible. Such cases included the retaining walls outside the secondary school in the Lazdiniai neighborhood, an array of other purposes in town, and — very painfully, the steps of the Chronika cinema theater that had been and would again become our main church.

You needn’t be an expert to see the visible traces of those little meticulously engraved Jewish letters on these recycled stones. And the abuse of those stones around a half century ago remains well within living memory. Nowadays there can be no excuse. We are well aware that the proud, wide steps that form the entrance to our church are made out of matséyves, the Yiddish for Jewish gravestones.

The issue of desecration of matséyves in Vilnius has been raised in recent years, usually by Jewish researchers, including Genrich Agranovski, Chief Rabbi Chaim Burshtein, Professor Pinchos Fridberg, Irina Guzenberg, and Dovid Katz. There is a section on these topics in Defending History.

Now the time has come for a Christian to speak up. This is not first and foremost a Jewish issue. It is a Christian issue. It is important for non-Jews, for Lithuanians, for Reformed Christians, to say something out loud, and clear, in the public square. Something must be done without delay: the matséyves must be taken from their desecration of being stepped on by Christians on the way to church, and brought to a place of honor. It is the right and the just thing to do. There are many reasons for that, of which seven:

It will do justice to recognizing the Jewish legacy in Lithuania.

It will do justice to the Republic of Lithuania by restoring Jewish property.

It will do justice to the city of Vilnius (Vilna, Wilno, Vilne), once called the Jerusalem of North.

It will contribute an instance of justice to interreligious dialogue between Jews and the Reformed Christian Church, and to Christian-Jewish relations more generally.

It will do justice to that which is sacred for all humankind: the honoring of the gravestones that commemorate the dead.

It will do justice to the Jewish families, whose children set up and unveiled these matséyves for their beloved fathers and mothers. It was after these people died that their relatives and descendants were all murdered in the Holocaust, leaving stones that cannot be looked after by children and grandchildren. It is the universal justice of speaking up for those who cannot speak for themselves.

God bless you all who will take the initiative to do this right and just act and bring these matséyves to the place of honor and dignity. Today.