Why We Have Not, Do Not and Will Not Talk About the Holocaust in Lithuania

The following article by Rūta Vanagaitė, in the authorized English translation by Geoff Vasil,  was first published in Lithuanian in Delfi. lt.  The article emerged from the conference on Holocaust education organized by the author, held at Vilnius City Hall on 17 April 2015. Conference program. Conference’s final press release. Project website.

Vilijampolė — a part of Kaunas — wintertime. The project is “Being a Jew.” A group of thirty teachers led by a Jewish guide is standing in the former Kaunas ghetto. Houses, garages, storage spaces, wood piles where during the war thousands of Jews, herded here like animals by the Nazis, milled about, yards where Jewish children played, and were later taken to the square or to one of the Kaunas forts and shot. The houses and storage buildings have been rebuilt, renovated, replaced, and there are Kaunas residents living in them now who don’t know where they live and what happened here before they were here. And how could they know? There is no written notice, nothing preserved, only a stone next to the entrance. And a building is being renovated which was the store whose display window once featured the head cut off of the rabbi who lived here. 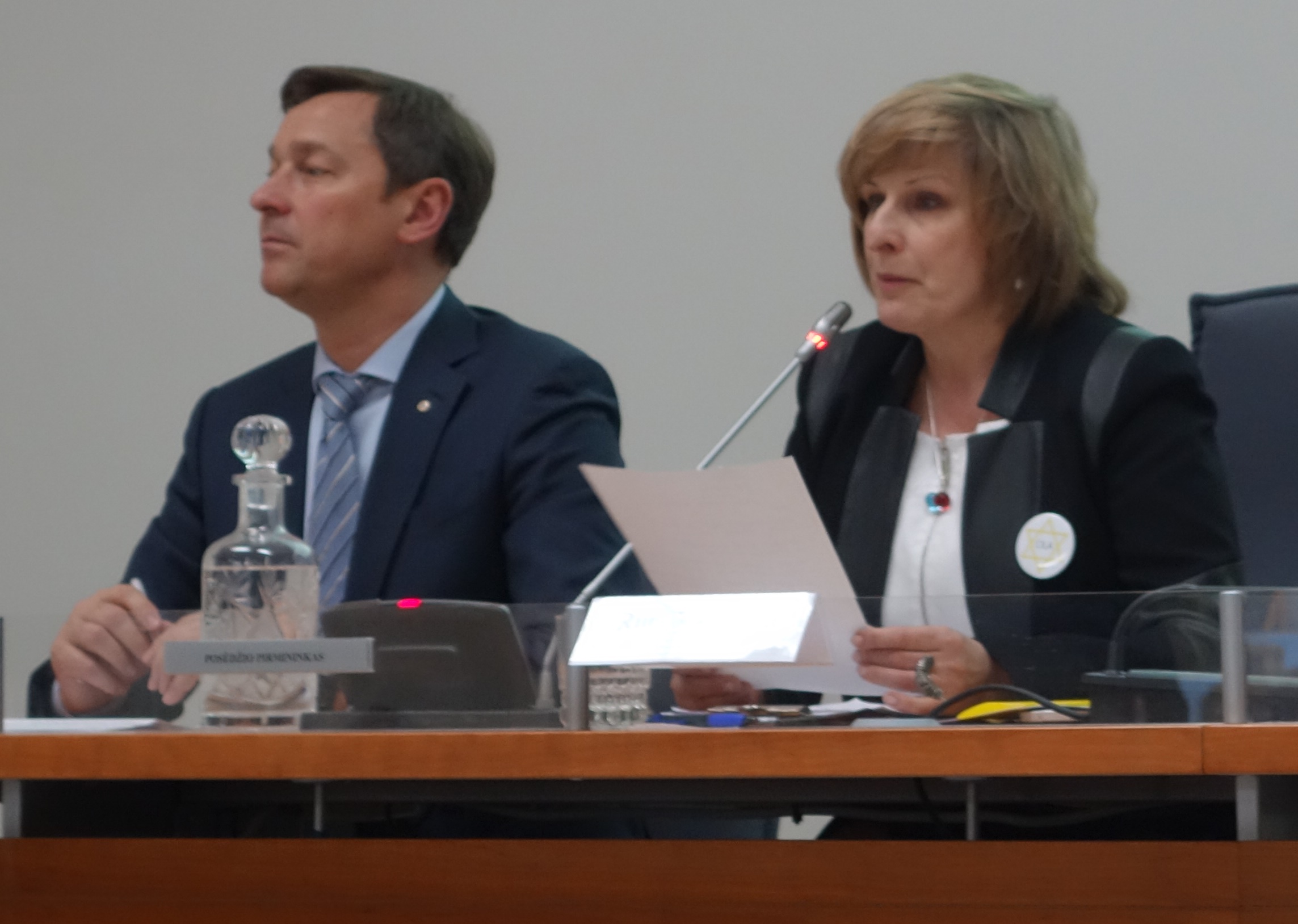 An Audi stops next to us. A man with a shaved head rolls down the window and shouts: “Well, Jews, what do you want? What are you doing here? What are you looking for?” After our guide gives him a polite response, almost apologizing for our presence here, the man drives off down one of the small streets of the ghetto, but several minutes later turns around and drives back towards us at full speed. The brakes screech and the car comes to a stop right before plowing into our group. I thought things would go badly and I went up to the man in the vehicle to try to alleviate the situation. There was an open, unfinished bottle of beer on the car seat. I said to the man: “Don’t be angry. We are not Jews, this is just a tour. This was the ghetto, after all, didn’t you know that?” I saw that this was news to him and he didn’t know what ghetto meant. “Maybe you shouldn’t drive,” I told the man with the shaved head, “since you’ve had a few. You don’t want the police to catch you.” “I am a policeman,” he said. Finally he drove away, not having done anything to us.

Last week for the closing of the “Being a Jew” project we held an international conference on the Holocaust. Celebrated historian Saulius Sužiedėlis spoke there about something the majority of Lithuanian people really don’t know, and probably don’t want to know: it wasn’t the dregs or rejects of society who shot the Jews. Thousands of us, of our own, of Lithuanians shot the Jews, as Sužiedėlis called them, “average guys.” Not out of sadism, either. It was simply that when the Germans came, after the Soviets, in the summer of 1941, these “average guys” resurrected all of the administrative structures of independent Lithuania, including the police, self-defense units, and so on. Average Lithuanians who loved their country went back to work or began work in these structures or became members of these battalions. And then they got their first order: to kill the others, people who were different. The “average guys” carried out their assignment well, so all that was left for the Nazis was to observe and report their satisfaction back to Berlin. “Obedience to the bureaucratic mechanism and loyalty to their comrades were the main consideration in turning ‘average guys’ into murderers,” Saulius Sužiedėlis said. Greed, alcohol and good old-fashioned Lithuanian antisemitism also helped those men carry out their assignments.

Slander? Lies? I read the case-files on my relatives who were sentenced. All files on political prisoners and deportees are accessible to everyone, all you have to do is go to the Special Archive across the street from Lukiškės Square [in Vilnius]. I read the files on my grandfather and of others arrested along with him — one person was imprisoned with him for convoying group of Jews to a killing site. He was rewarded with a house and 4.5 hectares of property belonging to a Jewish man. My grandfather didn’t kill, didn’t receive Jewish property, he only participated in drawing up lists. Could he have refused to do that? I don’t know. Were many of our relatives those same “average guys” who loved Lithuania and became murderers against their own wills? Could they have refused to do what they did? I don’t know.

I know that we in Lithuania haven’t spoken about this, are not speaking about it and will not speak about it in the near future. Jews from Israel and the United States attack us, although we heroically repel and resist all their fantastic inventions. It doesn’t seem to matter that our historians know the facts. Historians investigate and keep quiet. The facts are no good to us, they are even dangerous. For even if we say openly and publicly that Lithuanians were not heroes, and that some things did happen, that would be very useful to Putin. He will exploit that and turn us into Nazis and fascists, and then he will surely attack our country. As I was escorting Tomas Venclova after the conference, I asked him about that. The poet answered simply: “The truth cannot be useful for Putin, nor for any other of our enemies. The truth can’t hurt Lithuania. The lie, or suppression, can, and it is exactly that suppression which serves Putin’s policies.”

The idea has been put forward in Lithuania of an official history policy. The parliament wants to legitimize the idea with legislation. We do not need this law since there already is an official sanctioned history policy. “Our history is commemorative, it aspires to commemorate the heroic acts of the nation, to recall the losses the nation has experienced and to honor the dead,” Saulius Sužiedėlis said. “The ethnic Lithuanian can only be an innocent victim or a heroic fighter, and often both the one and the other simultaneously,” Tomas Venclova said.

Everything beyond the limits of “commemorative history” is not our history, and is therefore unimportant. It doesn’t matter that Vilnius was a Polish and a Jewish city, or that if you live in an apartment in the Old Town, there was probably a Jewish family who lived there before they were murdered. No one is going to place a memorial plaque on the giant Jewish hospital in Vilnius which still has its old doors, wood floors and windows, where apartments for Vilnius residents have been set up in what were the operating room, childbirth section and X-ray facility there. Our tour group didn’t go there, because some “average guy” would likely emerge from one of the apartments and say something like: “Well what do you want now, Jews?”

School children from Vilnius do not travel the short distance to Paneriai [Ponár], located just next to Vilnius, where 70,000 Jewish people were murdered [of a total of 100,000 victims],  and not exclusively at the hands of the Nazis. Where in order to save bullets men banged the skulls of living infants against trees. The trees are still standing there. But those who were murdered at Paneriai were not “our” people, they were “theirs.” At the culmination of the “Being a Jew” project we brought 700 students from Vilnius to Paneriai, stood by the killing pits and asked if anyone has been there before. Around thirty students raised their hands. All students, of course, over their twelve years of school visit all of the important Lithuanian museums, including the Horse Museum and the Chocolate Museum.

The Genocide Research Center a few years ago published on their website the names of a thousand Lithuanian people who were involved in the murder of other people from 1941 to 1944. After a couple of days that list disappeared; apparently history policy had come into play, which is implemented in Lithuania easily, through a single telephone call.

Why am I writing about all of this? For whom and for what purpose are these tours, conferences and commemorative events? Why delve into the past, why not let bygones be bygones? “After all, all peoples suffered,” an acquaintance of mine told me. “They were that kind of times,” another said.

Now of course times have changed. On April 16, on Holocaust Remembrance Day, when our project participants, 700 children, mounted the train from Vilnius to Paneriai, some of the boys saw some Jewish kids standing nearby. “Well, let’s load the Jews on the train cars,” they said, and laughed. The Jewish kids began crying. The history policy implemented by the Lithuanian government has truly been effective.

Update of 4 May 2015: This article appeared also in En.Delfi.lt / The Lithuania Tribune.