For Lithuanian Holocaust survivors around the world who have in recent days contacted DefendingHistory.com, the “problem” here is the decision to honor the current Lithuanian foreign minister (as a “Guest of Honor”) after his string of antisemitic and hurtful statements, and his current campaign against his own parliamentary colleagues who have stood up for the truth about the Lithuanian Holocaust, which claimed around 95% of Lithuanian Jewry, the highest victim rate in all wartime Europe. Most recently, Lithuanian parliamentarian Vytenis Andriukaitis and British human rights champion MP Denis MacShane have had the courage to stand up and challenge the foreign minister, while incredibly, various Jewish organizations are busy honoring him rather than any of the bold Lithuanian citizens who have stood up against the wave of antisemitism and Holocaust Obfuscation, or indeed, the Lithuanian Holocaust survivors defamed by Lithuanian government agencies in recent years.

Holocaust Survivors are planning to demonstrate outside the Tel Aviv Dan Panorama Hotel on the evening of 5 March 2012. If you wish to support their (peaceful and polite!) demonstration, please turn up at 6 PM in front of the Dan Panorama. Refreshments and coffee will be served. “Not gala, but from the heart and with integrity and Litvak pride.” 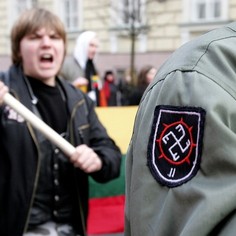 From a previous year’s neo-Nazi march on the main boulevard of the Lithuanian capital Vilnius on the nation’s independence day. This year, an international petition is underway asking the Lithuanian government to ban the Nazis’ city-center march on 11 March 2012. Authorities issued a permit for 2000 participants.

The dwindling international community of Lithuanian Holocaust survivors is reeling from what for them smacks of a lack of elementary empathy (most used the word betrayal) on the part of generally noble Jewish organizations that rush to fulfill the latest political wish of the current right-wing Lithuanian government that has presided over still-unretracted accusations against Holocaust survivors who joined the resistance (an issue attracting wide attention), neo-Nazi parades with government permits in the center of the capital city (protest petition here), toleration of 1930s style headlines in daily newspapers, and criminalization of the accurate narrative of World War II history.

This is supplemented, at the sophisticated end of the antisemitism spectrum by the state-sponsored campaign to obfuscate the Holocaust, symbolized by the red-brown commission (critiques here), support for the Prague Declaration (critiques here), endless projects to honor the Lithuanian Activist Front (LAF) and other Holocaust murderers, the Genocide Museum and even the new Holocaust Room added under pressure in a small cellar room of that museum. A massive campaign to obfuscate all this entails parallel investments in memorial plaques, (Jewless) Jewish libraries, and international gala events, conferences, and honors and medals for ever more naive foreign Jewish dignitaries (sometimes known in the survivor community as “Useful Jewish Idiots” or UJIs for short). All this at a time of grave economic crisis when the people of Lithuania hope for rather wiser investment of state resources.

Joe Melamed — Holocaust survivor, resistance leader and hero of the Israeli War of Independence — speaks out to fellow Litvaks.

Back in 2010, Lithuania’s current foreign minister, Audronius Ažubalis, complained that a Jewish conspiracy was behind efforts to amend the current (rather racist) citizenship law (see now Evan Malnik’s petition on the subject and a list of links). Immediately the Jewish Community of Lithuania called an emergency board meeting at which the twenty-one members present agreed unanimously on the text of the following letter that was sent to the president of Lithuania and published in the community’s newspaper, Jerusalem of Lithuania (PDF here). 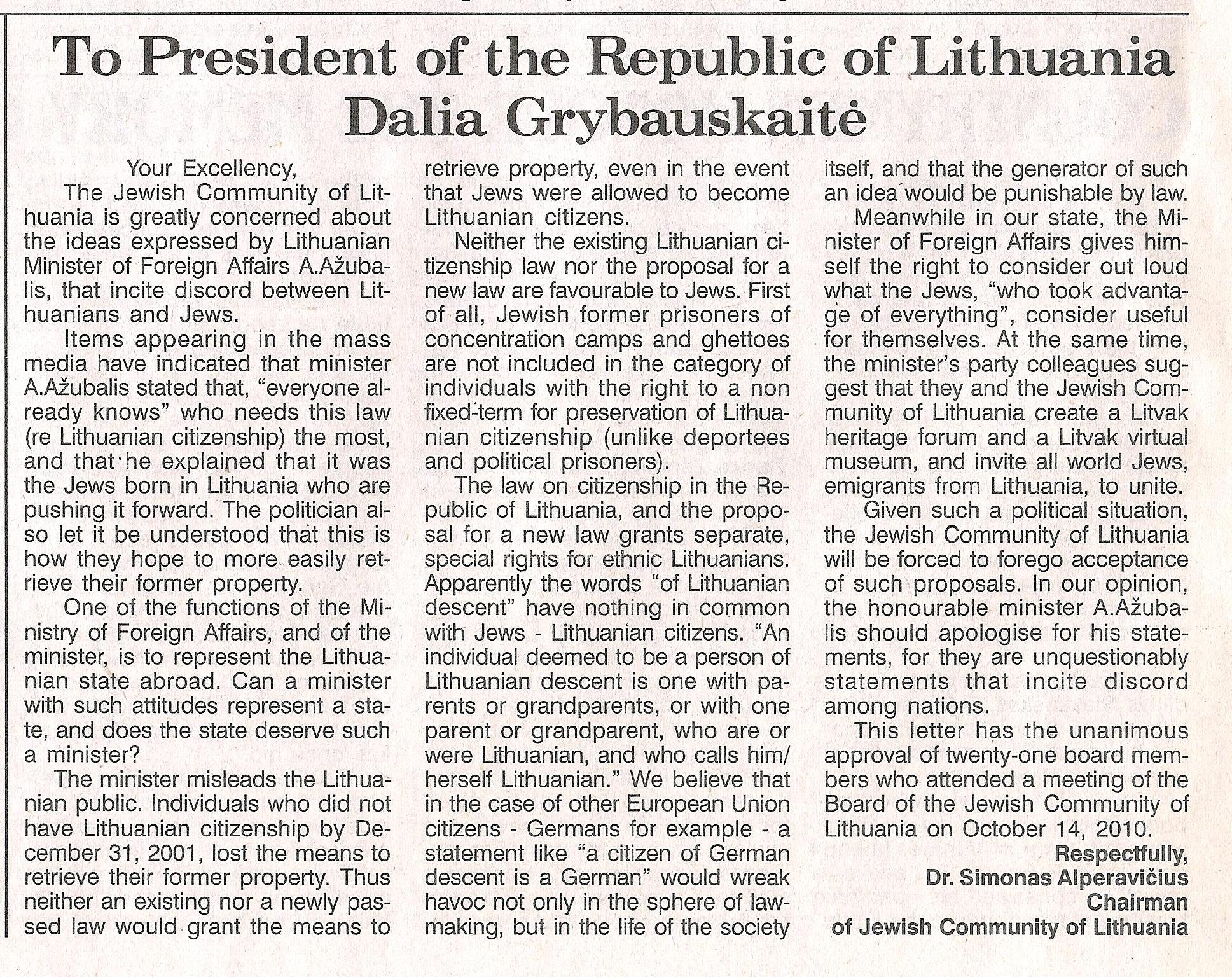 In late 2010, the small and fragile Jewish community in Lithuania had the courage to send this letter to the nation’s president concerning the foreign minsiter’s antisemitic outburst, for which he has still not apologized. Last month the foreign minister viciously attacked his parliamentary colleagues who signed the Seventy Years Declaration on the anniversary of the Wannsee Confernence and made his infamous “moustache comparison” remark. Next month, on March 5th, he is  a “Guest of Honor” at a “Save the Date Gala”  in Tel Aviv.

Less than one month ago, on 20 January 2012, when seventy European Union parliamentarians  issued the Seventy Years Declaration on the occasion of the seventieth anniversary of the Wannsee Conference on the “Final Solution,” Ažubalis, on the day of the anniversary, blasted the eight Lithuanian parliamentarians who signed as “pathetic” and went on to say through his press attaché that “It is not possible to find differences between Hitler and Stalin except in their moustaches. Hitler’s was shorter.”

The Lithuanian foreign minister’s newest outburst drew a courageous response from a leader of the opposition Social Democrats. It even made the New York Times. But some Jewish organizations consider this the precise moment to host him as “Guest of Honor” in — Tel Aviv.

ALTERNATIVE PROPOSAL FOR ‘GUEST OF HONOR’ AT THE  MARCH 5th TEL AVIV GALA:

Dr. Rachel Margolis, 90, who lives down the road in Rechovot, cannot return to her native Vilnius for fear of prosecution and harassment. A hero of the anti-Nazi resistance in the Vilna Ghetto and in the forests of Lithuania, she taught biology at Vilnius University for nearly half a century before emerging as a  leading Holocaust educator and scholar in Vilnius. Her accomplishments include rediscovery, decipherment and publication of Kazimierz Sakowicz’s eyewitness diary of the genocide at Ponar (Paneriai), and helping set up the Green House Holocaust museum in Vilnius. A previous president and prime minister of Lithuania, the late Algirdas Brazauskas, awarded her a certificate of recognition for helping free Lithuania from Nazism. 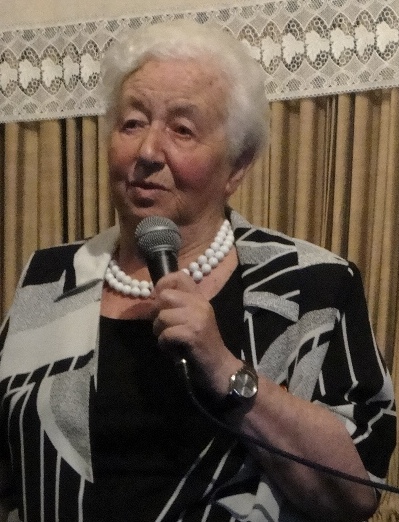 Finally, it is curious that one of the sponsoring organizations of the Save The Date Gala Dinner is “Israel Lita.” 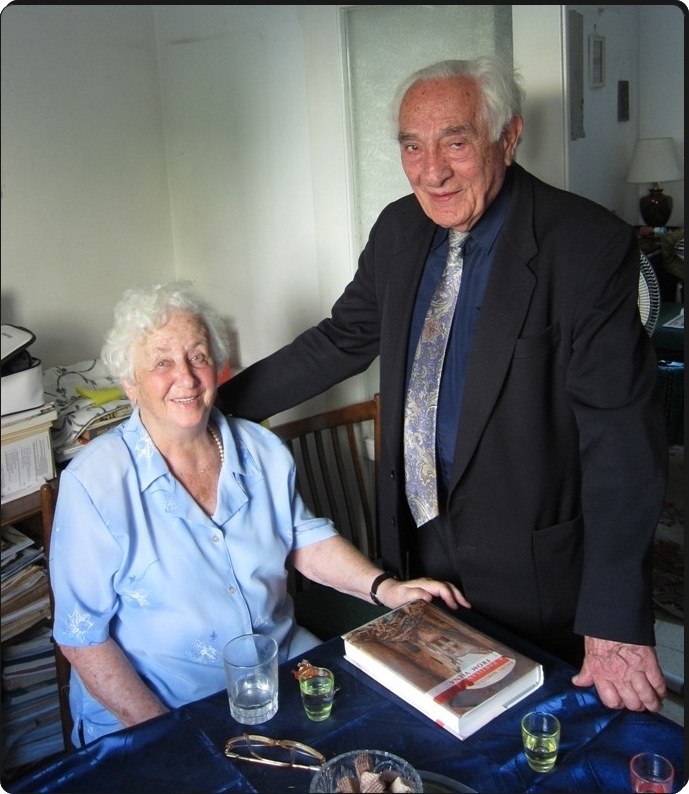 Joe Melamed, head of the Association of Lithuanian Jews in Israel, congratulating Dr. Rachel Margolis on her 90th birthday (28 October 2011). Mr. Melamed, a hero of the anti-Nazi resistance in the Kovno Ghetto and the forests of Lithuania, and of the Israeli War of Independence, will be leading the demonstration of Holocaust survivors outside the Dan Panorama on 5 March 2012. The survivors are protesting the staging of a “gala” to honor the current foreign minister of Lithuania.

In 2011 this group issued a stomach-churning statement,  under apparent influence of the Lithuanian Embassy in Tel Aviv, bitterly attacking Holocaust survivor Joseph Melamed, 87, the head of Israel’s last organization of Lithuanian Holocaust survivors for holding opinions on the Holocaust that differ from those of the current Lithuanian government.

This statement was issued after Lithuanian prosecutors arranged, in August 2011, for Interpol to come and interview Mr. Melamed, 87, a hero of the Kovno Ghetto resistance, the anti-Nazi partisans in the forests of Lithuania, and of the Israeli War of Independence.

“Israel Lita” which goes on the attack against the elected head of the last active organization of Litvak Holocaust survivors, is apparently linked with the “Israel-Lithuania Chamber of Commerce and Industry,” which is the official co-organizer of the March 5th “Tel Aviv Sellout Gala” to crown as a “Guest of Honor” the foreign minister of Lithuania.

The minister has yet to apologize for any of his slurs against Jews, survivors and his own parliamentary colleagues who signed the Seventy Years Declaration last month on the anniversary of the Wannsee Conference. He has also been one of the most incessant pushers of “Double Genocide” in the European Union. One of his major initiatives, in December 2010, came down to defeat, in part because of the work of Litvak advocates and groups internationally. Instead of relenting, his ministry’s campaign to obfuscate the Holocaust via “Double Genocide” resolutions was resumed forthwith.

In 2011, the Lithuanian government sponsored numerous events to honor (as “patriotic rebels”) the Lithuanian Activist Front (LAF) Holocaust perpetrators of 1941. Their leaflets, distributed before the war, indicated clearly their plans for the Jewish population of Lithuania.

Seven Simple Solutions to the Outstanding Issues in Lithuanian-Jewish Relations.

On the Lithuanian foreign minister’s recent statement on Hitler’s and Stalin’s moustache length: