For reasons unknown, Yivo has for years pursued an aggressive policy of promoting the Lithuanian government’s “official version of history” to the exclusion of any dissenting views, and, with frequent dismissal of the very legitimacy of other views, including those of Holocaust survivors, Yiddish scholars, and the bold non-Jewish Lithuanian voices of dissent, including, in recent years, the powerful work of Evaldas Balciunas, Dr. Andrius Kulikauskas, Julius Norwilla, and Ruta Vanagaite.

The seven-year-old paper trail has included impassioned pleas to Yivo’s leadership, in 2011, from Milan Chersonski, the editor of the Lithuanian Jewish Community’s then official newspaper and, in 2015, from one of the last Vilna-born Holocaust survivors still resident in the city, Prof. Pinchos Fridberg, whose views were also included in a New York Times article this past September, itself a follow-up to a wide-ranging piece in the paper last March. For years, the red-commission commission used its state-sponsored website to defame Prof. Fridberg, added to the proverbial roster of enemies for daring to speak up with a contrary opinion.

The latest Yivo foray into Lithuanian government Holocaust politics is the currently advertised Yivo-Bard Winter Program entitled “The Shoah in Lithuania, 1941–1944” taught by Professor Christoph Dieckmann, a prime member, for nearly two decades, of the Lithuanian government’s “red-brown commission”. The program’s motto reads: “Laugh. Argue. Learn. Resist” which means, presumably, that the organizers will welcome free and frank discussion, on its glittering new Facebook page, and of course, during the program itself. The contribution of the Baltic state’s commission-on-history member is also counted, for some surprisingly, as as an integral component of the Yivo-Bard Program on “Ashkenazi civlization“.

One of the lectures, on 9 January is the “keynote lecture of the winter session” for which tickets can be bought separately. Its title is “Beyond Simple Myths”, for some disturbingly similar to a 2011 Lithuanian government sponsored conference, “No Simple Stories,” in London (original conference explanation of the concept; Dr. Efraim Zuroff’s critique; Dr. Clemens Heni’s critique; DH report). For years a massively financed state campaign has tried to delegitimize as a “Holocaust myth” the massive, locally energized and enthusiastic participation by locals in the humiliation, injury, humiliation and murder of their neighbors; hopefully something completely different is intended by the upcoming event’s similar title.

Let there be no mistake. Professor Dieckmann is a major international scholar, one who has held prestigious university posts in the UK and Germany, has authored major works, is the winner of prestigious awards and is an important voice in the current debate. But his is not the only voice, and given Yivo’s continued promotion of the red-brown commission’s “party line” (and it is a very Soviet-style state commission, down to its volumes including signed approbations by the politician who is its nominal head), it is hoped that participants will be exposed to opposing views in a meaningful and respectful way.

For many years, Dieckmann, a member of Lithuania’s state-sponsored commission on Nazi and Soviet crimes for the last eighteen years, has, in the opinion of some, repeatedly trivialized the vast corpus of testimony from Holocaust survivors about the voluntary and enthusiastic unleashing of violence, humiliation and murder of peaceful Jewish neighbors by local nationalist elements affiliated with the Lithuanian Activist Front (LAF) in the week of 23 June 1941, during which many Jews were murdered, effectively launching the Lithuanian Holocaust (sample of testimonies). The crux of the matter is that these events, including injury, plunder and humiliation occurred in hundreds of locations. Actual murders were documented in at least forty locations by the late Prof. Dov Levin. The outbreak of massive violence against Jewish neighbors transpired in these hundreds of locations before the arrival of German forces or before the setting up of German administrative control (notwithstanding German involvement with some of the slaughter in the city of Kaunas). They took place by the free will and local initiative of these groups of murderers of fellow citizens who were Jewish. The major group associated with the widescale overnight dehumanization of Lithuanian Jewry, the LAF, is however described in national museums and history books as a kind of “noble revolt against Soviet rule” (an abject nonsense, as the Soviet army was fleeing Hitler’s Operation Barbarossa, the largest invasion in human history, not the local Jew-killers). The degree of manipulation in the current tale of rewriting history (it will one day be investigated properly) has even included, reportedly, an academic reviewer of one of Dieckmann’s books being on the Yivo candyroll of luscious honors and glorified trips to Eastern Europe, and seeing his way clear to avoiding challenging the author on this point despite being well aware of it and of Prof. Levin’s research.

Hopefully, the evidence produced by Professor Dov Levin and many others of the “pre German arrival” violence in Lithuania will also be presented at the seminar, even if rebutted by Prof. Dieckmann. In other words, hopefully, the existence of the two views will not be hidden from the fee-paying participants in the seminar, if only in the spirit of Western democracy’s tradition of robust and respectful debate in the context of an atmosphere of academic freedom. 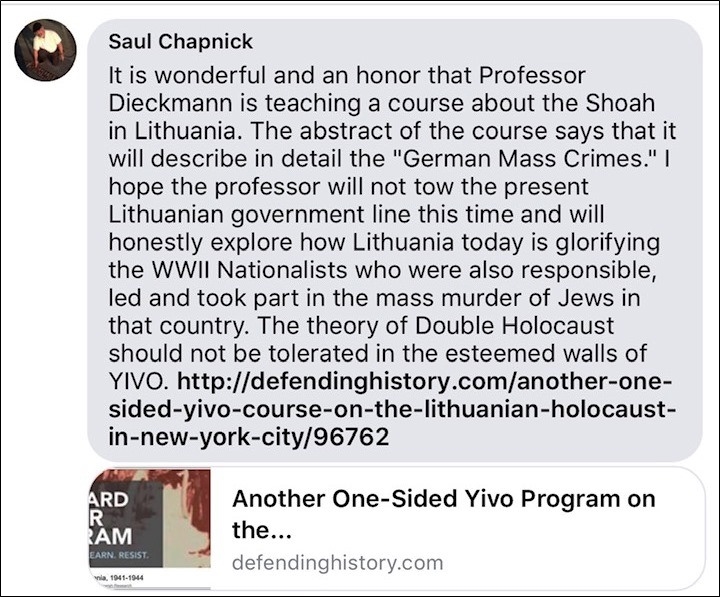 Hopefully, Yivo will not fear to keep Saul Chapnick’s comment on the Facebook page for the January 2019 program (as PDF). Whatever happened to ‘Laugh. Argue. Learn. Resist’?

Then, there are more Dieckmann specific issues this winter. First, he is currently part of a  major $35,000 Go Fund Me appeal  (excerpt with budget only) for his new book in partnership with Lithuanian bestselling dissident author Ruta Vanagaite. After Defending History reported that the appeal was using as advertising various of the editions of Ms. Vanagaite’s earlier book coauthered with Dr. Efraim Zuroff, these images were deleted (see PDF of the earlier page). After the appearance of the Vanagaite-Zuroff book that in essence told a broad Lithuanian readership of the basic truth of the Lithuanian Holocaust, it was Professor Dieckmann who rushed to trash the entire project, supporting the Lithuanian far right’s long running personal campaign against Dr. Zuroff, who is the director of East European Affairs at the Simon Wiesenthal Center. Dieckmann told Newsweek magazine:

“’The problem with Zuroff is that Zuroff is always about Zuroff”; he is “a one-man institute, ridiculously bad on research,” who “turns history into a James Bond movie.”

—Dr. Christoph Dieckmann, quoted in Newsweek magazine in July 2016 after appearance of the book by Ruta Vanagaite and Efraim Zuroff

The state commission, of which Prof. Dieckmann and the director of Yivo are members, has officially supported the 2008 Prague Declaration, widely regarded as the “constitution” of the Double Genocide movement. The commission’s Executive Director has publicly explained its views on Vilnius prosecutors’ attempts to prosecute Holocaust survivors who joined the resistance, and on the massively documented outbreak of violence and murder in numerous locations in the week of 22 June 1941 prior to the arrival of German forces.

The plot thickens further, with Vanagaite and Zuroff having rolled out for the media a personal relationship in October 2017, ,but now, on the cusp of 2019, Dieckmann alone emerging as the “champion of truth” in Vanagaite’s new Go Fund Me, which lists Prof. Dieckmann’s honorarium at ten thousand euros (see PDF of today’s version of the Go Fund Me page; excerpt with budget). Is he breaking with his Commission’s views? Does he  agree with the Commission’s long-standing support of the 2008 Prague Declaration? Has the Commission refused to publish the book which focuses on part of its own raison d’être? Is Vanagaite breaking with her earlier views espoused during the time of the Zuroff-Vanagaite partnership? No doubt Prof. Dieckmann will enlighten the Yivo-Bard program’s participants on the contemporary goings-on at ground zero of the East European Holocaust, where, sadly, Holocaust studies are interlinked with current politics in a wider trend of rewriting history in an East European nationalist spirit. In her Facebook comment on an earlier posting of this article, Ms. Vanagaite has downgraded her own earlier book authored together with Dr. Zuroff, a book which had huge and positive impact on perception of the Holocaust in Lithuanian society.

Last but not least, the Yivo-Bard program overlaps with the start of one of the major Holocaust history trials of the century, scheduled for the capital of the country featured in the New York course’s title. On January 15, the Lithuanian government’s Genocide Center will be opposing calls for the removal of national hero status for Jonas Noreika, a brutal Holocaust collaborator whose involvement is copiously documented, and is now even the subject of an online museum hosted by Noreika’s granddaughter, the American author and educator whose article in Salon this years stands out for its courage and striving for historic truth, whatever the pain (Ms. Foti would make an outstanding speaker for one of Yivo’s series on Lithuania). It was Defending History’s Evaldas Balčiūnas who first brought the Noreika case to the English speaking world back in 2012; Mr. Balčiūnas was “rewarded” with years of police and prosecutorial harassment (see his DH section, scroll down to May 2014). But Prof. Dieckmann’s Commission has yet to utter a public word on its views about the Noreika case dramatically unfolding in the Lithuanian capital, and more broadly, about whether state-sponsored memorials for alleged Holocaust collaborators are being challenged by the history commission of which he is a key and long-standing member.

Yivo-Bard seminar participants will want to know where Professor Dieckmann stands. He is, moreover, cordially invited to reply on these pages.