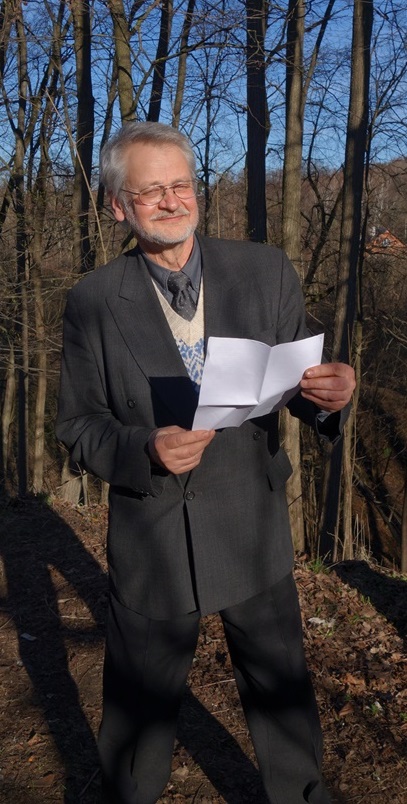 A bemused Vilnius film director finds a letter from the police department’s criminal investigations unit concerning his work in Holocaust Studies. Saulius Beržinis is founder and director of the Independent Holocaust Archive of Lithuania, housed in a bucolic setting on the outskirts of Vilnius.

The state’s honoring of alleged Nazi collaborators in the country reached a high point in 2012 when the remains of the 1941 Nazi puppet prime minister, Juozas Ambrazevičius-Brazaitis were reburied by the government with full honors, among much fanfare. Ambrazevičius had personally signed the Lithuanian versions of the Nazi-origin orders committing the Jewish citizens of his city, Kaunas (Kovno), to a concentration camp (actually the Seventh Fort murder camp) and the remainder to a ghetto. One of the few to dare film the May 2012 reinterment was Beržinis.

The state glorification of alleged collaborators includes permanent exhibits at the “Genocide Museum” in Vilnius, and most painfully for Holocaust survivors and their families, the naming of streets and squares and a lecture hall at Vytautas Magnus University in Kaunas for alleged Nazi collaborators (see DH sections on glorifying collaborators, and articles by Evaldas Balčiūnas; international petition).

The campaign by prosecutors and police to intimidate and silence Holocaust research reached its own highpoint in 2011, when Interpol was asked to disturb Holocaust survivor and elected chairperson of the last active group of Litvak survivors in the world, Tel Aviv attorney Joseph Melamed. Melamed is the author of the 1999 book Crime and Punishment which called for investigation and where possible, prosecution, of alleged Nazi war criminals. Vilnius prosecutors’ (ab)use of Interpol drew reaction in the British Parliament.

In recent months, Giedrius Grabauskas, the author of an article questioning state glorification of alleged collaborators, has been  investigated by police and threatened with prosecution. It seems that this latest latest letter is a further step in same campaign of using police and prosecutors to settle historic disagreements that form the subject of academic conferences, books and competing evidence in the free market of ideas. 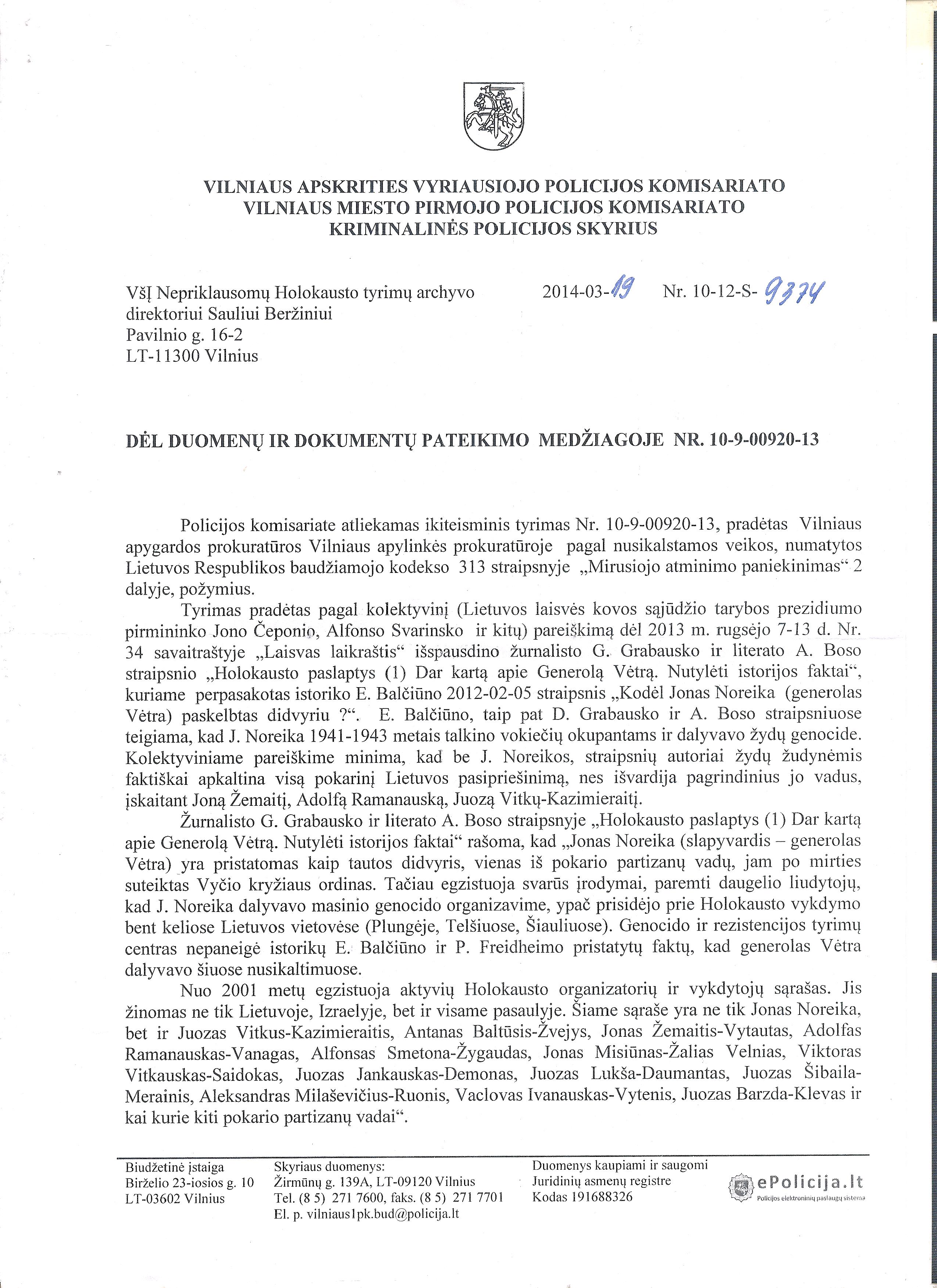 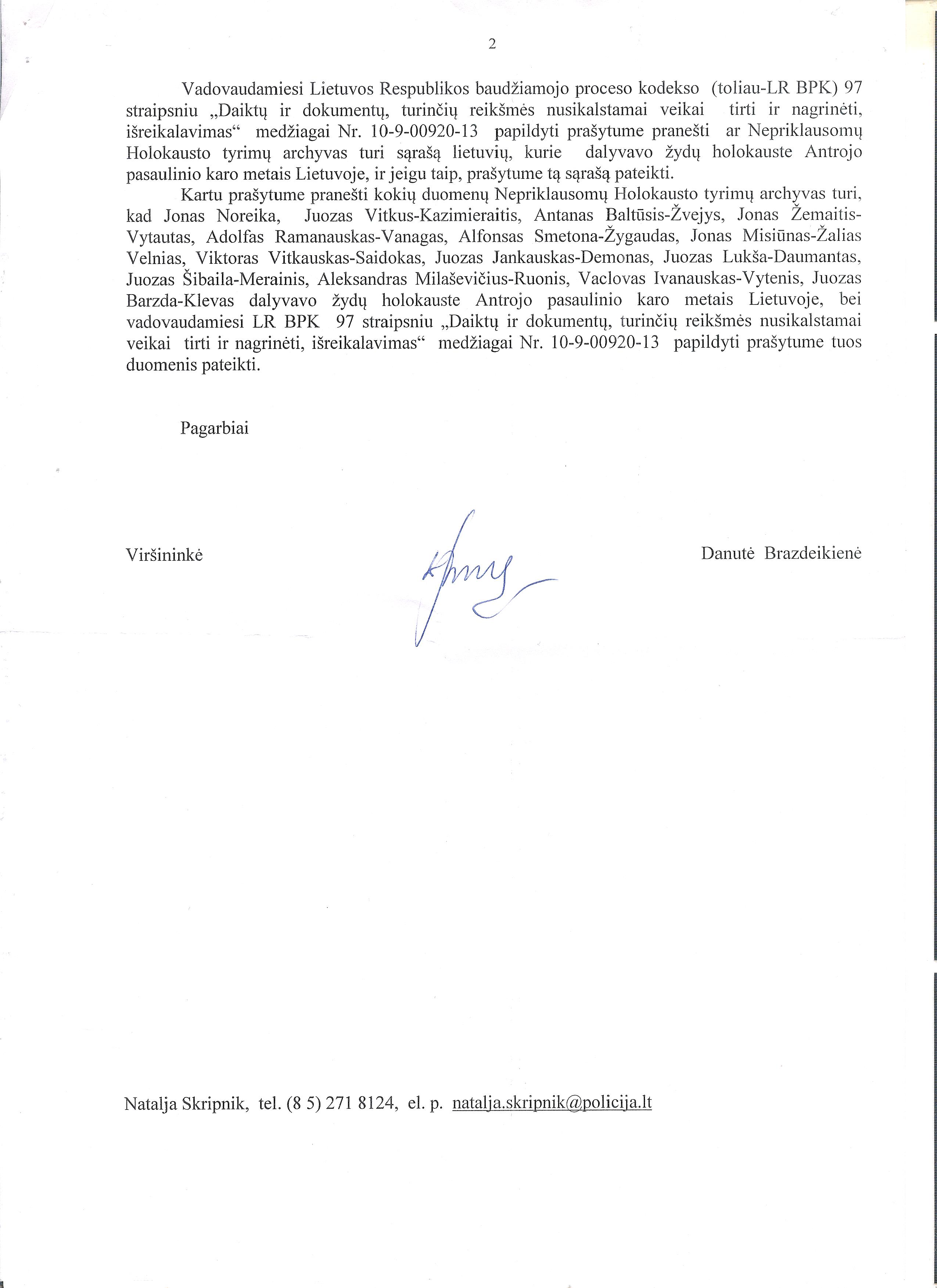 Pre-trial investigation no. 10-9-00920-13 is being conducted at the police commission, initiated at the Vilnius District Prosecutor’s Office according to indications of criminal action as defined in article 313, section 2, of the Lithuanian Republic criminal code, “Desecration of the memory of the dead.”

The investigation was begun according to [in response to] a collective statement (Union of Lithuanian Freedom Fighters chairman Jonas Ceponis, Alfonsas Svarinskas and others) on the article “Secrets of the Holocaust (1): Again, on General Vetra. Hidden Facts of History” by journalist G. Grabauskas and writer A. Bosas, published in issue no. 34 of the weekly newspaper Laisvas Laikrastis for September 7 to 13, 2013, in which historian E. Balciunas’s article of February 5, 2012, “Why is Jonas Noreika (General Vetra) Announced as a Hero?” is recounted. It is claimed in Balciunas’s article as well as that of D. [sic] Grabauskas and A. Bosas that between 1941 and 1943 J. Noreika collaborated with the German occupiers and was party to the genocide of the Jews. The collective statement says that the authors of the articles in fact did not just accuse J. Noreika of the mass murder of Jews, but the entire post-war Lithuanian resistance, because they named its main leaders, including Jonas Zemaitis, Adolfas Ramanauskas, Juozas Vitkus-Kazimeiraitis.

The article “Secrets of the Holocaust (1): Again, on General Vetra. Hidden Facts of History” by journalist G. Grabauskas and writer A. Bosas says “Jonas Noreika (cryptonym: General Vetra) is portrayed as a hero of the nation, one of the leaders of the post-war partisans, and he was awarded posthumously the Order of the Cross of Vytis. But there is other evidence, supported by many witnesses, that Noreika participated in the organization of mass genocide, and especially contributed to carrying out the Holocaust in at least several Lithuanian locations (Plunge, Telsiai, Siauliai). The Genocide and Resistance Research Center has not repudiated the facts presented by the historians E. Balciunas and P. Freidheimas [showing] that General Vetra took part in these crimes.

Based on article 97 of the Lithuanian Republic’s Criminal Code (hereafter LR CC), “Demanding items and documents with a bearing on the investigation and analysis of criminal action,” for additional information for [case] material no. 10-9-00920-13, we ask you to report whether or not the Independent Holocaust Research Archive has the list of Lithuanians who took part in the Jewish Holocaust in World War II in Lithuania, and if so, we ask you to provide that list.

We also ask you to report what information the Independent Holocaust Research Archive has [showing] that Jonas Noreika, Juozas Vitkus-Kazimieraitis, Antanas Baltusis-Zvejys, Jonas Zemaitis-Vytautas, Adolfas Ramanauskas-Vanagas, Alfonsas Smetona-Zygaudas, Jonas Misiunas-Zalias Velnias, Viktoras Vitkauskas Saidokas, Juozas Jankauskas-Demonas, Juozas Luksa-Daumantas, Juozas Sibaila-Merainis, Aleksandras Milasevicius-Ruonis, Vaclovas Ivanauskas-Vytenis, Juozas Barzda-Klevas participated in the Jewish Holocaust during World War II in Lithuania, and, based on article 97 of the LR CC, “Demanding items and documents with a bearing on the investigation and analysis of criminal action,” in order to acquire additional information for [case] material no. 10-9-00920-13, we ask you to provide that information.

NOTE: the footer of page 1 of the letter contains the information: