The most spirited opposition  — and the only serious challenge in the courts —to Tomkus’s titles came a decade ago in the wake of the 2004 front page cartoon of The Jew and The Gay dominating the world. It came not from any local human rights organization but from the head of the Jewish community, Dr. Shimon Alperovich who dared to take on the almighty establishment editor in Vilnius. The battle was epic, and forthrightly reported from the Jewish community’s point of view in  Jerusalem of Lithuania edited by Milan Chersonski, in 2004 and 2005). When the courts would not punish Tomkus or this titles, he celebrated in 2005 with another front page headline that took up much of the page: “V. Tomkus Won Against the Jews.”

But following last month’s dramatic March 11th street debate at Vilnius’s Parliament Square between the Simon Wiesenthal Center’s Dr. Efraim Zuroff and Mr. Tomkus, Dr. Zuroff proposed to write something for Respublika in a gesture of dialogue. Mr. Tomkus immediately accepted. They had met at the conclusion, near the nation’s parliament (the Seimas), of the annual neo-Nazi march. Dr. Zuroff led a small, silent protest against the event, in which three members of the Defending History Vilnius team also participated.

Then, on March 27,  the Jewish Community’s former and longtime leader Dr. Shimon Alperovich, whom Tomkus had defamed countless times in the course of antisemitic campaigns, died in Vilnius.  Dr. Zuroff offered to provide an obituary. Mr. Tomkus agreed.

The following is the text sent by Dr. Zuroff, as released by the Simon Wiesenthal Center’s Israel Office today. But without the author’s permission, the obituary article was reduced to a letter to the editor, headed in the print edition with Listen, Respublika! Today’s online version carries the alternate heading Special to Respublika.

The text colored red broadly marks what was edited out of Respublika’s published version. Other instances of more minor editing are not marked.

The death last week of Dr. Shimon Alperovich marks the end of an era in the history of the Jewish community of the new Lithuania. It was he who led the community for more than two decades, during a unique period of Lithuanian and Jewish history. It was no easy task to try and create a community which had not existed for almost half a century, in a country which had previously been independent only for 22 years and had just reestablished its independence after fifty years of subjugation. Add the fact that Dr. Alperovich was 62 years old, had lived his entire adult life in the Soviet Union,  and was now expected to lead the local Jews into the 21st century and a modern Western world which was changing by the minute. And if these challenges were not hard enough, there was the thorny issue of the Holocaust which cast a huge shadow on Lithuanian-Jewish relations.

In retrospect, Dr. Alperovich’s twenty-one years as Chairman of the Lithuanian Jewish community are basically a microcosm of the ups and downs of the ambivalent relations between Lithuanians and Jews in the wake of the Holocaust and the reestablishment of Lithuanian independence. Things started off fairly well. There was excitement that Lithuania had finally been freed from the oppressive Soviet yoke, and Jews shared the feeling that life would change for the better in a free Lithuania, which would be part of the Western world. There appeared to be an unwritten agreement in place, whereby the Jews would support Lithuania at home and especially abroad and in return, the government would protect Jewish rights and help the community develop, but also acknowledge and apologize for the Holocaust crimes of Lithuanian Nazi collaborators and make the story of Jewish suffering part and parcel of the accepted local historical narrative.

The Jewish community kept its part of the bargain and Jewish organizations, especially the powerful American Jewish Committee, did a lot to help facilitate Lithuania’s entry into the European Union and NATO, even though the Lithuanian government did not punish local Nazi collaborators and when dealing with the Holocaust minimized the number of Lithuanian participants, inflated the number of rescuers, and promoted the double genocide theory. Things took a turn for the worse, however, in 2006 when Jewish partisans were accused of supposed war crimes, and the nationalist press incited against them. At this point, Dr. Alperovich proved his courage, speaking out boldly in defense of the anti-Nazi fighters and demanding that the witch-hunt against them stop immediately. When the number of antisemitic incidents rose, again and again he spoke out, challenging the Lithuanian authorities and local society to maintain the values they claimed to protect.

When in the wake of the Prague Declaration, the government started pouring millions into promoting the canard of equivalency between Communist and Nazi crimes, and the glorification of the LAF and Provisional Government became practically a national obsession, Alperovich refused to remain silent and spoke out repeatedly against the distortion of the history of the Holocaust, practically a lone Lithuanian defender of historical truth.

Throughout the years, Dr. Alperovich continued to keep his side of the unwritten agreement to support Lithuania, but as Chairman of the Jewish community, he realized that true friendship between Lithuanians and Jews could only be based on historical truth, and therefore chose to risk public hostility and condemnation (and unflattering front page photos in Vakaro Žinios) to achieve those goals.

May his memory be a blessing for both Jews and Lithuanians.

Dr. Efraim Zuroff is the chief Nazi-hunter of the Simon Wiesenthal Center and director of its Israel Office. 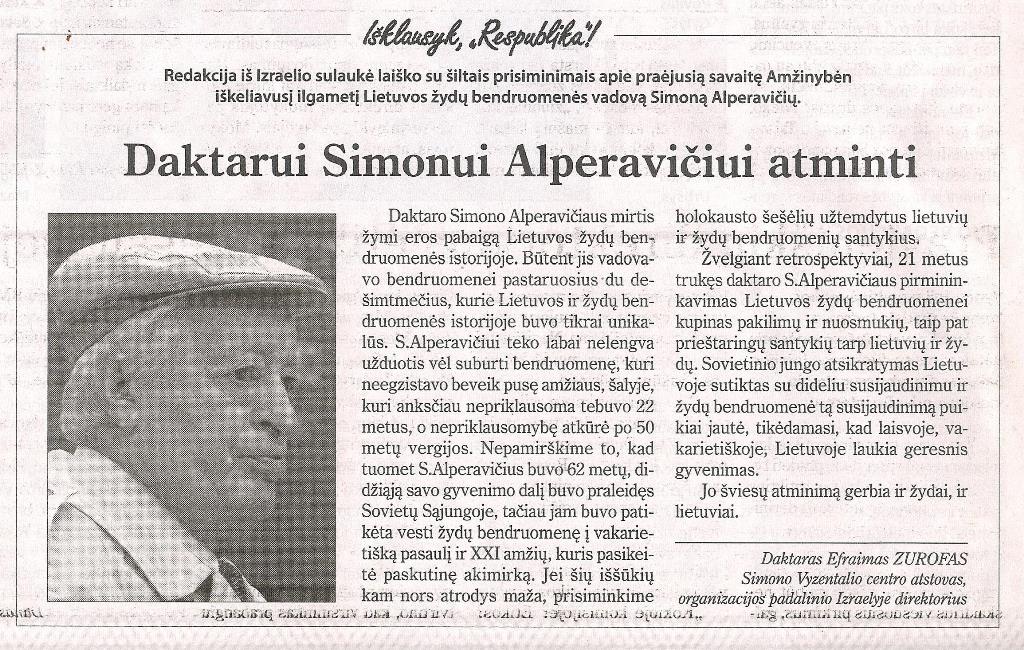 The entire text of Dr. Zuroff’s obituary was published today by Kaunožinios.lt