For Seventh Year Running, Neo-Nazis and Ultranationalists Given Center of Vilnius on Independence Day

Posted on 11 March 2014 by Defending History

Lithuania’s March 11th independence day is celebrated by the free world, not least by those who remember the incredible news that spread around the globe in March 1990, when Lithuania’s parliament (Seimas) voted 124 to zero to break away from the Soviet Union. The courage of the parliamentarians from a broad spectrum of parties and movements was stark; the country was still occupied by ominous Soviet forces (and blood would be spilled by Soviet forces’ violence less than a year later, in January 1991). The March 11th celebration has been anchored  over the years by a record of achievement that includes the transition to democracy, the joining of the European Union and NATO, and the rapid integration with Western society, economy and mores.

For friends of the country that has made it all the more a letdown that since 2008, the center of the historic capital, Vilnius has been gifted by authorities for a neo-Nazi / ultranationalist march on March 11th. They got underway in 2008 with chants of “Juden raus,” rhymes calling for expulsion of ethnic Russians, and a Lithuanian ditty calling for the Jew to be taken off the ladder and killed. Starting with 2008, Defending History has monitored the event annually. In 2012, DH posted a brief video of a Jewish citizen of Lithuania, born after the war, explaining how he feels about the annual marches. It was included in Richard Bloom’s 2012 documentary.

BACKGROUND TO THE 2014 MARCH

The “good news” about today’s march is that there were no fascist or antisemitic slogans yelled, far fewer choruses of “Lietuva Lietuviams” (Lithuania for Lithuanians), few overtly fascist symbols, and far fewer white armbands.  The agreement reached by the organizers with authorities — to stem the international criticism that has caused wholly unnecessary damage to the country’s standing — was generally adhered to. In fact, at the start of the event, police insisted that a marcher with a sign condemning the allegedly malign designs of Israel and Poland on Lithuania  (and with Waffen SS bolts on his attire), was rapidly told by police to put it right back in his plastic bag. He did. 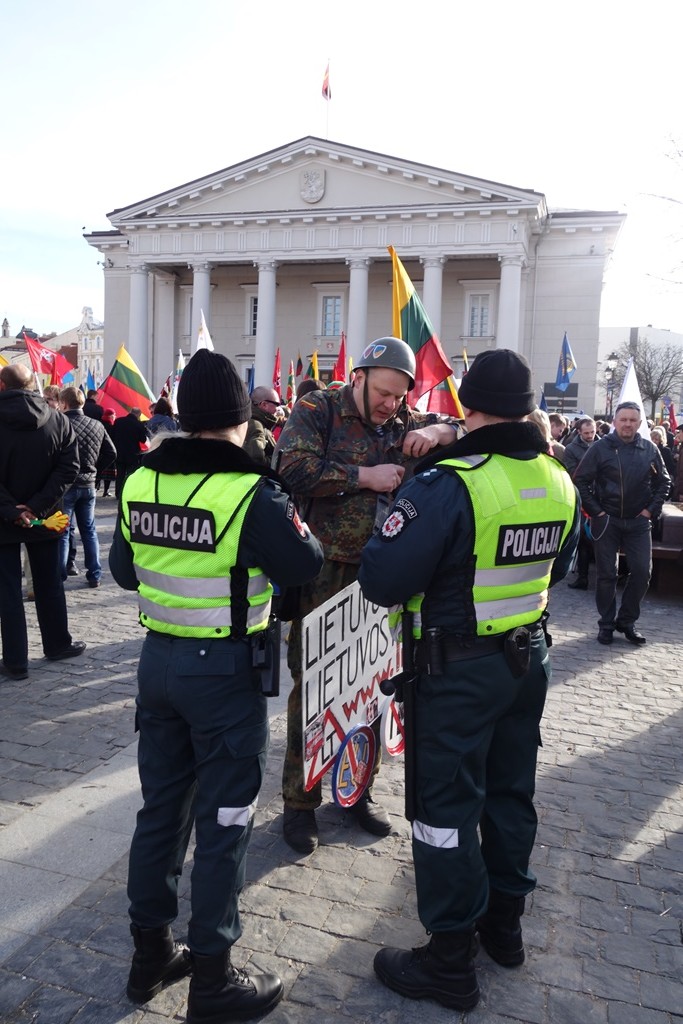 At the start of the March 11th event, in Old Town Hall Square in the old city, police told a marcher sporting a sign with anti-Israel and anti-Poland elements to put it away.

The troubling aspect of the “good news” is, in short this. It was the same fascism-adulating leaders, the same organizing groups (who proudly list previous years’ marches on their site), with the same noxious far-right ideologies and hatreds, but cosmetically spruced up to cause less embarrassment, and indeed, less interest. At today’s event, there seemed to be very few journalists, and nobody from human rights organizations, NGOs, anti-fascist groups. Where were the NGOs and European Union financed projects dedicated to monitoring human rights, racism, antisemitism and xenophobia? 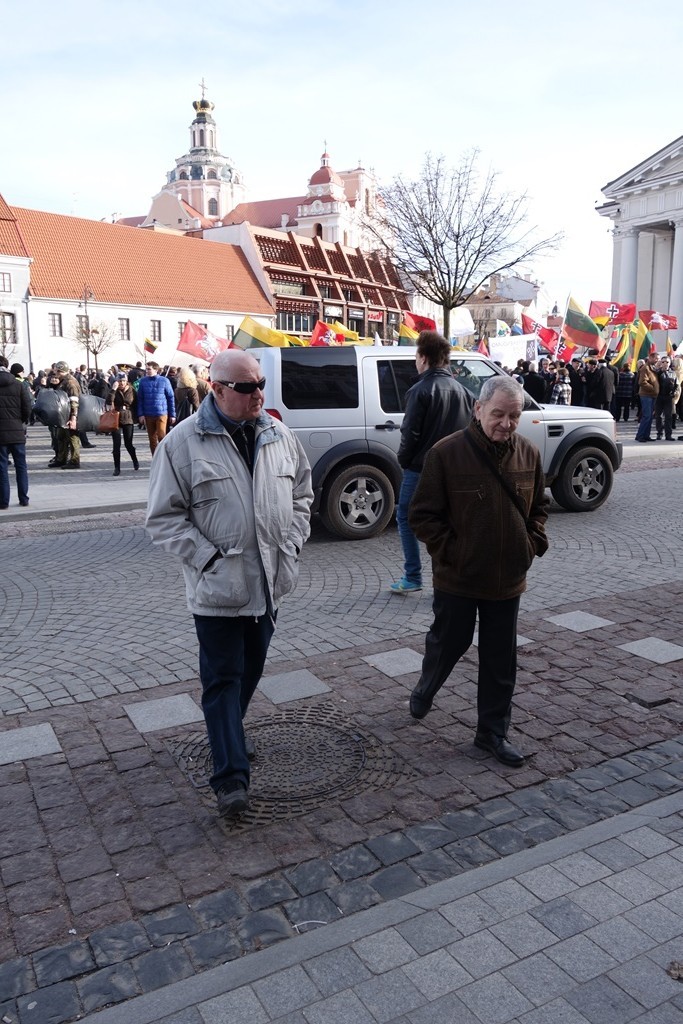 The bad news today starts with the fact that the marchers (with crowd estimates in the range of 1,500) were for the first time granted both the old town and the city center, starting from Old Town Hall and proceeding to Gedimino right up to the Seimas, where they were duly honored from the podium by right-wing former members of the Seimas. This final rally took place in the actual square of the nation’s prestigious parliament building, rather than the nearby location of the premises near the Genocide Museum, slightly lower on Gedimino Boulevard.

Alas, a large banner featuring Juozas Ambrazevicius-Brazaitis, the 1941 Nazi puppet prime minister, whose remains were ceremoniously transferred and reburied with full honors by the government in 2012, was part of the “permitted signware” and was carried from Town Hall and then up Gedimino to the parliament building. Ambrazevicius-Brazaitis personally signed documents confirming the expulsion of Jewish citizens of his city, Kaunas, to the Seventh Fort, where they were murdered. The remainder, in a second document, were given four weeks to abandon their homes and report for incarceration in the Kovno Ghetto. Is this the Lithuania the state wants to project in 2014? In numerous discussions with participants and onlookers, our team asked why the marchers do not instead honor one of the real heroes of 1941, the incredibly brave Lithuanians who risked all to just do the right thing and save a neighbor from the LAF, the provisional government, and other Nazi allied entities. 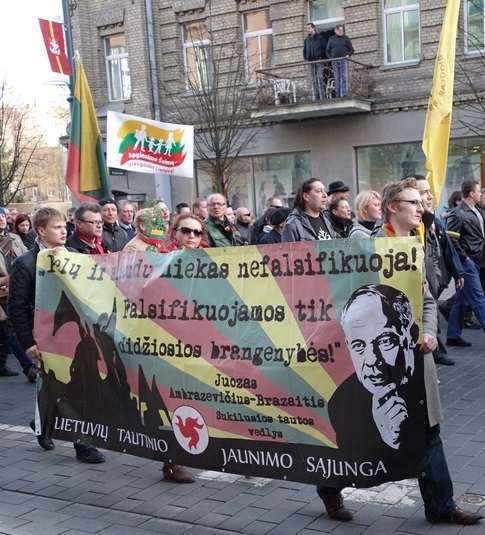 Banner featuring the 1941 Nazi puppet prime minister who signed documents sealing the doom of the Jewish citizens of his city, Kaunas (Kovno) making its way up Gedimino Boulevard in central Vilnius.

Moreover, when it comes to swastikas and white power insignia sewn onto clothing, it is well in the realm of worms in a plate of spaghetti: one is quite enough to qualify for the dish being unacceptable in civil society, period. And alas, there were today much more than one of each.

The march’s conclusion painted a sad picture of a national parliament building in a European Union capital surrounded at sundown by pro-fascist far-right elements, with full authorization from the authorities, on the country’s cherished independence day. Marred further by the neo-Nazis being addressed by former members of parliament and other persons who hold or have held high positions. 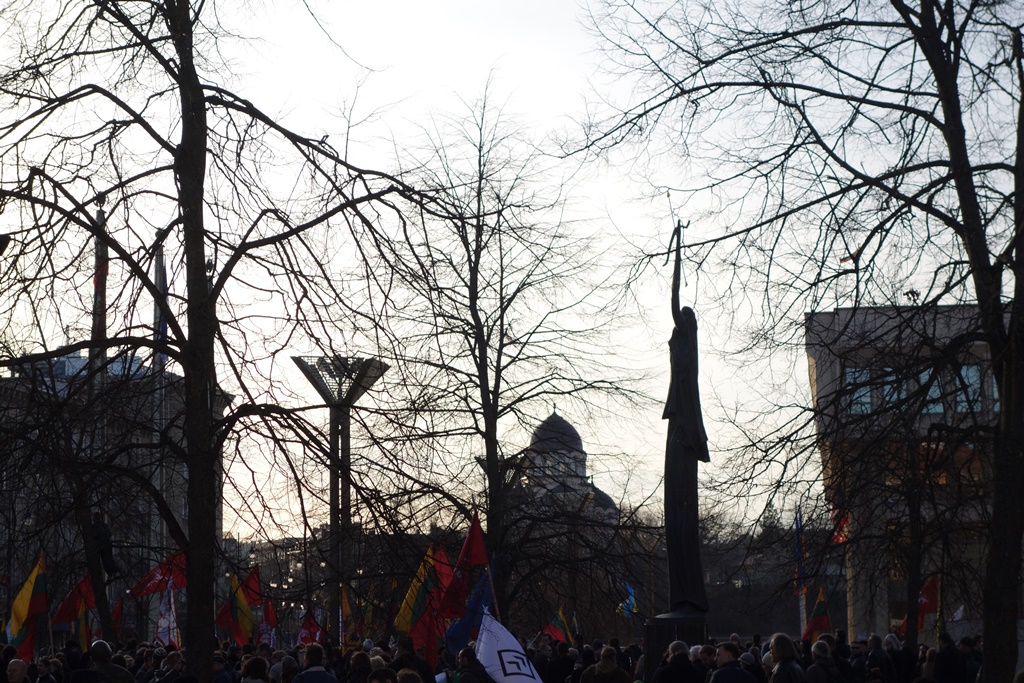 The concluding event featured far-right personalities addressing the assembled from the podium, with a front row of honorees including young men sporting sewn-on swastikas. It was obviously part of the agreement that the swastikas would be concentrated in the front row near the podium and away from any observers who wouldn’t see them far afar, from the points outside the thick of the crowd available to them.

Speakers from the podium included the organizer, Holocaust denier Ricardas Cekutis, who was for years a “chief PR specialist” at the state-sponsored Genocide Center (at the blue microphone in the photo below). The gentleman in the picture with the blue tie is Julius Panka, the leader of the far right, racist Lithuanian National Youth Association who led the neo-Nazi march in Kaunas less than one month ago. Standing next to him (holding white document) is 2008-2012 member of parliament Gintaras Songaila. Partially obscured between Panka and Cekutis is former MP Romualdas Ozolas. 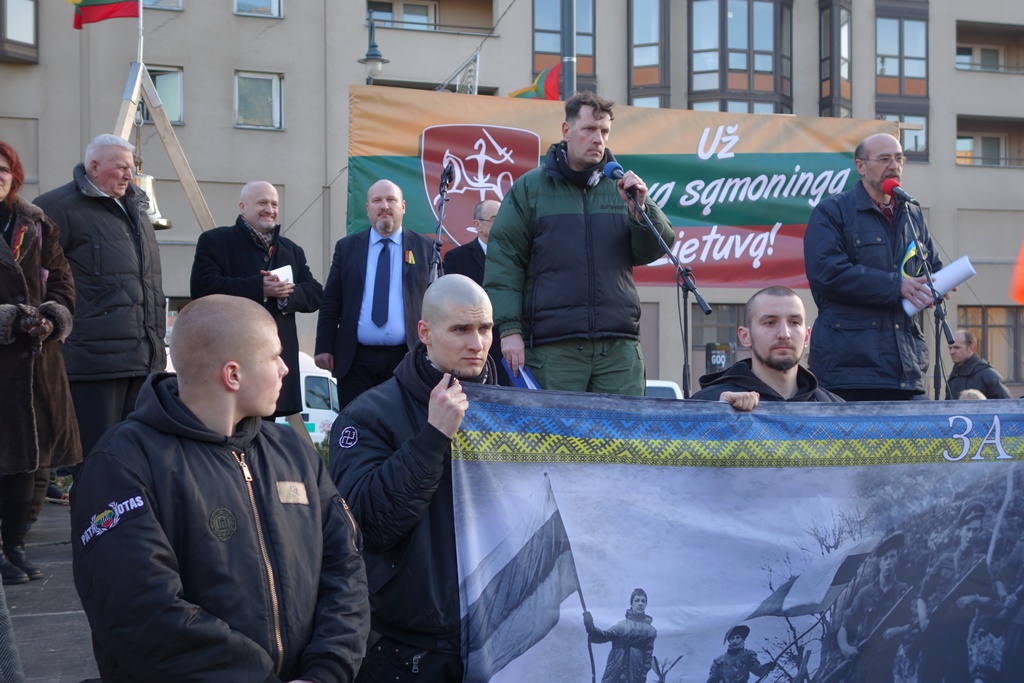 The notorious racist and antisemitic and homophobic blogger Zeppelinus, identified last year as a high official in the Economy Ministry, was on hand throughout the event.

One of the most memorable exchanges of the day was an extended (and wholly civil) conversation between Vitas Tomkus, editor of the antisemitic daily Respublika (home to the front page cartoon of the Jew and the Gay controlling the world) with the Wiesenthal Center’s Dr. Efraim Zuroff. 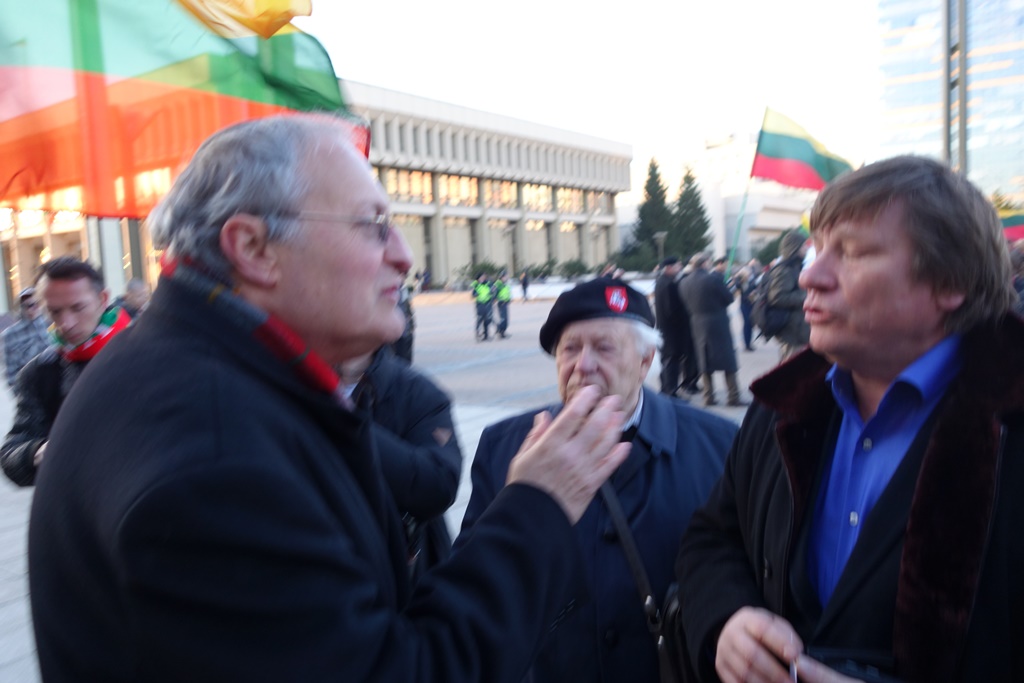