Posted on 10 March 2014 by Defending History

Colleagues of all backgrounds are invited to meet Dr. Zuroff, Holocaust historian, Nazi-hunter, author, director of the Simon Wiesenthal Center’s Israel office. He will lead a silent, peaceful remembrance of the annihilated Jewish citizens of Vilnius and Lithuania, in protest against the neo-Nazi marchers and the continued granting of city center venues on independence day. Meeting on Tuesday, 11 March 2014, 3 PM at Old Town Hall (Rotušė) Square. First meeting at edge of square, on the corner of Stiklių and Didžioji outside Amatininkai Café, monitoring the march (itself scheduled for 4 PM) to its conclusion on Gedimino near the Seimas (parliament). 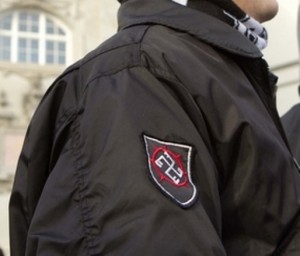 JUST IN: Feminist reportedly stabbed in central Vilnius in run-up to march; See Lina Žigelytė on the neo-Nazis and women’s rights

The march’s organizer is Ričardas Čekutis, who denies the Holocaust, and was for years the “chief PR specialist” at the Genocide Research Center. His pronouncements on gays, Jews, Poles, Roma (samples). Three progressive members of parliament spoke out in 2012. MP Vytenis Andriukaitis (now health minister) replied boldly to neo-Nazis’ threats against parliamentarians who stand up.

Čekutis’s call to marchers include reference to previous years, from 2008. More: 15min.lt reports on municipality’s reactions (2nd report); In Lzinios.lt. On Facebook.