Open Letter to Members of CPJCE in the UK: Do You Really Want a Convention Center in the Heart of Vilna’s Old Jewish Cemetery?

Dear Esteemed Associates of the “Committee for the Preservation of Jewish Cemeteries in Europe” enumerated on the CPJCE letterhead [more than one eminent personage on the list is deceased; their precious names might perhaps best not be invoked for the organization’s current adventures?]

We feel certain that you would wish to be apprised of the reality of a situation that may be at some variance with that which you may have been led to assume. No doubt, the very last thing you would wish to be associated with is a scenario in which the CPJCE, dedicated to cemetery preservation in Europe, is implicated or appears to be receiving funds from Lithuanian property developers and/or government-related bodies in return for permitting and blessing the construction of a twenty-five million dollar convention center in the very heart of Vilna’s old Jewish cemetery, which still contains many thousands of intact graves (though the Soviets pilfered all the gravestones).

Alas, the documented evidence mounts by the day. A “secret” agreement of 2009 permits all kinds of disturbance (for profit of developers) of the cemetery, and a U.S. State Department cable published by Wikileaks reveals the need for finding $100,000 back then to pay CPJCE for supervising “beautification and exploratory digging.” In April 2015, the same CPJCE group was lavishly received by the prime minister of Lithuania and his Jewish PR maestro, and gave its blessing to the convention center (None of Vilnius’s three rabbis were even told about the meeting). Demands are mounting for full transparency concerning the monies promised to CPJCE for “supervising” the building of a convention center. A documented outline of the cemetery narrative is here. The paper trail to date is here. The Defending History section on the subject is here.

Significantly, all other rabbis on the planet seem united in their opposition to the construction of a convention center in the middle of the old Jewish cemetery. 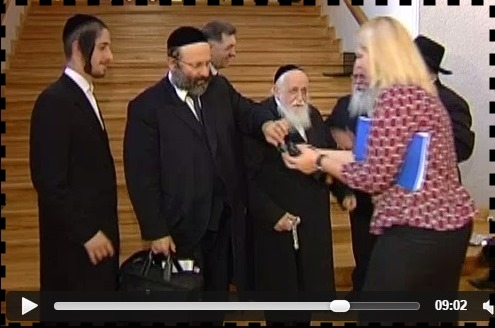 An April 2015 power point presentation prepared by the Lithuanian government flaunts some of the past “concessions” of the CPJCE (e.g. redefining territory where two blocks of flats were built less than a decade ago into a “buffer zone” though it is long proven that they were built on cemetery land). It also contains the astounding formulation: “modalities for certain activities in the territory of Šnipiškių cemetery and its buffer zone, to match the interests of the Jews, the state and the investors.” The CPJCE is here, in the public discourse of Lithuanian government and property development leaders, shortspeak for: “the Jews” (p. 11 of PDF). Needles to say, there is no mention that the slightest digging in the area turns up ever more bones and body parts, that the 2009 agreement purported to make kosher “certain” categories of human bones being removed, that the document was secret, that it incredibly excluded the chief rabbi (and all rabbis and Jewish religious leaders within the country), and failed to mention the payments to CPJCE (that only turn up in Wikileaks). To make matters worse, this past May, the CPJCE’s executive director resurfaced in Vilnius as a member of a new (secular and international) “Heritage Commission” set up by the Lithuanian government ostensibly to preserve Jewish heritage and particularly cemeteries and mass graves (!). Surprise surprise, the new commission passed over the planned convention center project in utter silence.

This is all part of a sad saga that will go down in history as one of the less stellar chapters in the history of the British rabbinate, particularly as it relates to exploitation of poorer, smaller historic “remnant” Jewish communities on ground zero of the East European Holocaust.

There appears to be unanimity of view among all other rabbis worldwide. The chief rabbi of Lithuania, Rabbi Chaim Burshtein; the top rabbinic Vilna Gaon scholar in Lithuania, Rabbi Shmuel Jacob Feffer (president of the Israel-based Machon Ha-Gró); the Vilna Gaon Synagogue in Tel Aviv (its document was signed by the Gaon’s descendants); the leading Lithuanian-origin heads of yeshiva in Israel (including Rabbi Meir Soloveitchik, Rabbi Israel Isaac Kalmanovitz and Rabbi Tzvi Rotberg); the Central Rabbinical Congress in New York; and the international Asra Kadisha group that fights for preservation of Jewish cemeteries — all have publicly condemned the convention center plans. [UPDATE: These rabbinic statements were followed by a declaration by all twelve of the leading Lithuanian-heritage (Litvak) heads of yeshivas in the United States, including Rabbis Feinstein and Kotler.]

This is not some arcane rabbinical flap over this or that detail of Jewish law forbidding the disturbance of graves.

This is a huge ethical, religious, political and social question with deep implications for minority rights, human rights and Jewish dignity. Is it right for a new twenty-five million dollar convention center, where people will cheer, clap, sing, drink in bars and use toilets to be built in the heart of the old Jewish cemetery in Vilna? A prominent Christian Protestant leader in Vilnius, a Jewish Holocaust survivor in Vilnius (one of the last), the Simon Wiesenthal Center, and an American Jewish scholar who helped see through a 2014 bill in the U.S. Congress preventing just such desecration, have all spoken out for the record.

The CPJCE is on the wrong side of this, and the allegations about payments (albeit payments for “supervision” of desecration that should never be countenanced in the first place) in return for relinquishing parts of cemeteries are all the more painful in post-Holocaust parts of Europe where the buried have no descendants or relatives in their own city to stand up for the graves they purchased to remain undisturbed. They did not do anything to deserve a London-based group of rabbis coming one day to effectively sell their graves (which is the de facto upshot of the documents now in the public domain).

This convention center would not be planned for an old cemetery in the Lithuanian capital if it were Christians who were buried there. That this is a major issue of discrimination (in the spirit of racism and antisemitism and disdain for minority rights) is evident from the new U.S. law, and, in connection with Vilnius, from the impassioned pleas of such diverse voices as the Protestant Pastor Michael Maass and the haredi Central Rabbinical Congress.

Do the right thing. Avoid years of destructive and embittered conflict that will not go away as five hundred years of the Jewish dead of Vilna become the architectural sub-cellar for joyous congresses and raucous entertainment events. Would you be doing this if it were your ancestors buried there?

The solution is so delightfully simple. Please speak up now, politely refusing to have any part in the travesty, politely asking the Lithuanian government to find an alternative venue for the new convention center, where it will be celebrated by all the fine people of Vilnius, and for that matter, the planet.

With greetings from Vilnius (in Yiddish forever Vílne),