Like the Lithuanian far right and ultranationalist camp, and its many lavishly honored Western defenders, the blog’s authors fail to discuss a single issue on the table in the journals Operation Last Chance and Defending History but proceed to label their editors, Simon Wiesenthal Center Israel office director Dr. Efraim Zuroff and this journal’s editor as “vitriolic”…

“Still, US programs aside, I have noticed that for the last couple of years the only viewpoints about Holocaust education in Lithuania known outside the region are the vitriolic ones. I think that the reason for this is because these views are the only consistent ones found in the English-speaking, non-academic media.

“Dovid Katz and Efraim Zuroff are two of the most well-known voices at this end of the spectrum, as they have a considerable media and web presence that they take great care to sustain. (Although, they aren’t the only ones).”

As no quotes or links are provided, in or out of context, one can only guess what counts as “vitriolic” comments from the two contributors to the debate who are named, in contrast to the gentle kindness presumably coming from the far right, the history-revising establishment and the neo-Nazis, who have a certain proclivity to round on the same two named people [see update box below].  The author passes over in utter silence the massive investment in distorting the history of the Holocaust, the Double Genocide movement, the ongoing defamation of Holocaust survivors, the glorification of Holocaust perpetrators, the state-countenanced antisemitism (and racism and homophobia) including pro-Nazi marches in the capital’s center on independence day, and quite a bit more. The “problem” for her is the “vitriol” of Zuroff and Katz, who must be getting too much attention because they write “in English”…. (cf.  the alternative line of attack against Zuroff and Katz by Lithuanian government sponsored historians).

Moreover, it seems from the published lament, that the significant government expenditure on initiatives in English, including massive volumes (most recently the Polonsky-Liekis volume), lavish events in London, Jerusalem, New York and Washington, alongside, in central Vilnius, a (Jewless) Yiddish institute, a midtown Jewish library (all in English), and an endless array of (impressively multilingual) “Jewish and Holocaust events” are simply failing. Presumably because those two evil Jews must be controlling the media. After all, we take “great care to sustain our web presence” (what is that supposed to mean?). Her/their grave concern,  that the English speaking world is in the hands of these two guys from Brooklyn (a syndrome sometimes known here in Vilnius with some local Yiddish humor as “Efraim Katz and Dovid Zuroff”) is a remarkable claim that will itself one day be studied academically.

Several months ago, Ms. Beresniova gave a glowing “American” endorsement to the red-brown commission, formally known as the International Commission for the Evaluation of the Crimes of the Nazi and Soviet Occupation Regimes in Lithuania. It is the chief engine of the Double Genocide movement in Europe, and has been widely condemned by Holocaust survivors and educators internationally. Moreover, resignations on principle from the commission and its affiliated bodies have included Dr. Yitzhak Arad, Sir Martin Gilbert (London), Prof. Gershon Greenberg (Washington, DC), Prof. Konrad Kwiet (Sydney) and Prof. Dov Levin (Jerusalem). Heaven only knows what the authors of the blog “Christine Beresniova and Rokas Beresniovas” think of them, not to mention the Holocaust survivors who have recently spoken  up with rather more backbone than some American researchers who are easily recruited by Baltic PR. Readers are referred to the recent very courageous pieces by Holocaust survivors Pinchos Fridberg of Vilnius, Yitzhak Arad of Tel Aviv, and groups of survivors in the United States and in Israel. Professor Fridberg’s statement about the commission and its recent conference in Vilnius appears also on the website of the Jewish Community of Lithuania. Vitriol? Or just a point of view critical of current incarnations of Holocaust Denial and distortion, antisemitism, racism and the honoring of the local killers of Lithuanian Jewry? 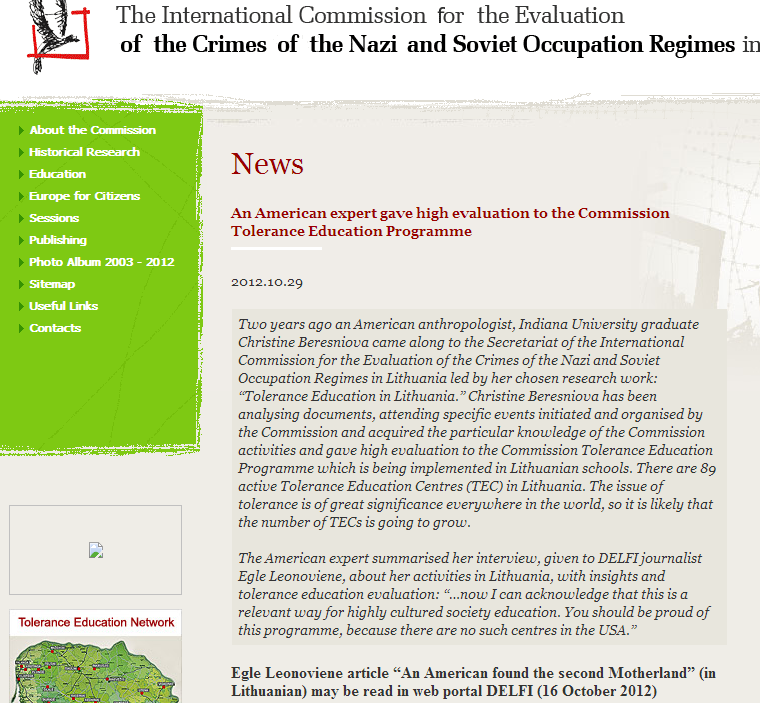 The bizarre statement “You should be proud of this program, because there are no such centers in the USA” is frankly unfair to the United States. The American government does not invest in glorifying Nazi war criminals as heroes, does not accuse Holocaust survivors of “war crimes,” does not invest in diminishing and trivializing the Holocaust, and does not set up commissions that work to impose far-right versions of history on other nations in the NATO alliance. Not to mention the incredible contributions of the United States of America toward Holocaust research, education and memorialization. No, Mr. Beresniovas and Ms. Beresniova, the records of the United States and Lithuania on this issue are quite the reverse. In fact, many bold Lithuanian citizens have stood up for the truth with enormous courage and integrity, including people who will stay here, and who get no honors for their words of truth.

25 Feb 2013: Author at the “mainstream” portal Balsas.lt calls for Efraim Zuroff and Dovid Katz to be given up to wild animals to be torn apart (for having objected to a neo-Nazi march sanctioned for the city center on independence day)

Around the same time, Ms. Beresniova became an instant celebrity in Lithuania featured on page one of a popular magazine as a Lithuanian hero. No doubt she deserves that status, and we wish her and her family well. But none of that is license to cover up for the very human rights and history-distortion abuses that one is meant to be studying for a higher research degree at a prestigious American university, or to join the proverbial mob that defames without discussion or disagreement on specific issues the same people condemned daily by the far-right antisemitic establishment for speaking up on behalf of Holocaust victims and survivors, freedom of speech (badly impacted by a 2010 law) and human rights.

From the academic point of view, it is only a matter of time before studies profoundly influenced by state-financed bodies and embassies with a vested (and historically speaking temporary) political interest will be exposed for  gross manipulability and failures of the critical prowess and moral independence that lie at the heart of bona fide research.

Back in 2011, this journal was proud to rapidly accredit Ms. Beresniova for a bold expose of racism. Perhaps in the fullness of time she will understand how thoroughly she was manipulated during her subsequent time as a Fulbright scholar in Lithuania. (The possible political manipulation of Fulbright fellows in recent years in line with changing US foreign policy is a suitable topic for inquiry — no dearth of research topics here.)

But in the meantime, it is only natural to bask for a time in a glorifying magazine cover and ride the bash-Zuroff-and-Katz route to rapid fame and glory here in the Baltics. 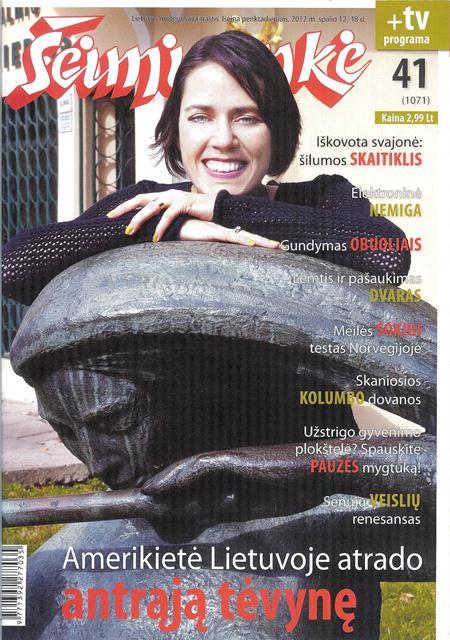