Background Reading on the Shift in US Foreign Policy on Holocaust Denial from c. 2009

Posted on 4 March 2013 by Defending History

The United States signs the OSCE’s “Vilnius Declaration” of 3 July 2009 into which the Baltic far right inserted Double Genocide language [p. 48, points 3 and 10].

Efraim Zuroff, “The Threat of Baltic Ultra-Nationalism” in the Guardian, 3 April 2010.

Efraim Zuroff, “No Tolerance for False History” in the Jerusalem Post, 1 May 2010.

Dovid Katz, “The Crime of Surviving. By arguing that Nazi and Soviet crimes are equal, Lithuania is aibrushing the Holocaust out of history’ in Tablet, 3 May 2010.

Efraim Zuroff, “US Must Take a Tougher Line on Baltic Revisionism” in the Guardian, 29 November 2010.

Dovid Katz, “Conference Call. The Lithuanian Sponsors of a Holocaust Education Program have a Dark History of Their Own” in Tablet, 3 December 2010.

First reports emerge on the US embassy’s promise of funding to the Summer Literary Seminars program in Vilnius on condition that Dr. Efraim Zuroff be dropped from the program, in Defending History, May 2011.  Subsequent report on 10 March 2012.

Dovid Katz, “Hannah Rosenthal Does It Again” in the Algemeiner Journal, 25 November 2011.

“Once Again, Moral Abdication at the American Embassy in Vilnius?” in DefendingHistory.com, 10 March 2012.

US Embassy in Vilnius convenes the “camouflage symposium” (framed to honor T. Snyder’s book Bloodlands) to help Lithuanian government cover for concurrent reburial and glorification of 1941 Nazi puppet prime minister, 17 May 2012. Video. Open letter. Within days, one of the embassy’s invitees to the symposium told the local press that the reburial of the 1941 Nazi PM demonstrated the “ongoing drama” of Lithuanian history, while lashing out at “the Jews” for making people afraid (of publicly honoring Nazis?) of getting clobbered by the Jews “with a club.” When pressed by local media, the US ambassador gave a “balanced” statement on the glorification of the leading local Nazi collaborator. 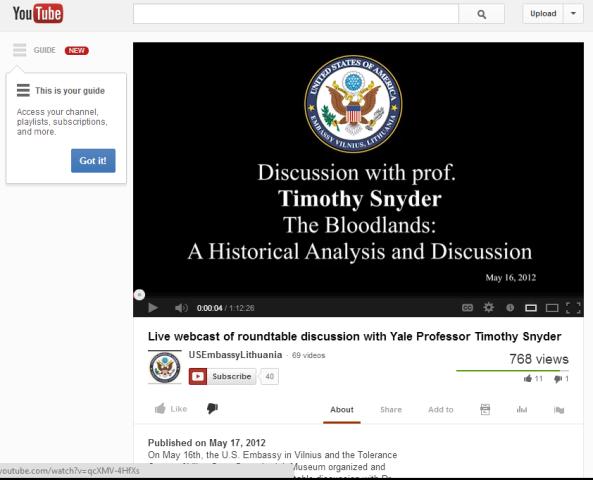 Believe it or not: As the 1941 Nazi puppet prime minister’s remains were being repatriated from the US to Lithuania for reburial and glorification, the US embassy helped cover up the scandal with a symposium on the Lithuanian Holocaust, at which the ongoing reinterment saga was not even mentioned by the Lithuanian government compliant participants chosen to speak. Within days, one of them called the reburial of the fascist PM a testament to the “drama” of Lithuanian history. . .

Milan Chersonski, “Is This Really What you Want To Do, Mr. Executive Director of Yivo?” in Defending History, 11 October 2012.

Efraim Zuroff, “Pardoning Nazism, in the Name of Lithuanian-Jewish Relations” in The Times of Israel, 14 October 2012.

[Jonathan Berger, US Embassy, Vilnius, statement issued to the press cited in] “Lithuanian  President’s Decree on Historians’ Commission Highlights Differences Between Nazi and Soviet Crimes” in 15min.lt, 17 October 2012.  The strange statement of uncritical American support for the revival of the “red-brown commission” flew in the face of pleas from groups of Holocaust survivors in the United States and in Israel, a public letter from the last group of Lithuanian Holocaust survivors in Israel to the director of Yad Vashem, and the commission’s lamentable record, which includes the resignations on principle by Dr. Yitzhak Arad, Sir Martin Gilbert (London), Prof. Gershon Greenberg (Washington, DC), Prof. Konrad Kwiet (Sydney) and Prof. Dov Levin (Jerusalem). To this day, the Commission’s website carries the text of the Prague Declaration presented as fact, in English and Lithuanian, and boasts of its role in the promotion of the Prague Declaration. The most recent in a long list of scandals concerns the protest by a Vilnius Holocaust survivor against inaccurate Commission statements that have yet to be corrected.