There were probably a hundred people in the audience, surprisingly many for a Wednesday morning. I missed the opening statement by the Lithuanian foreign minister and came in during the thick of a lecture in Russian. Two little translators’ huts had been set up in the back with tag-teams of two people each translating to and from Russian, English and Lithuanian, with little black headphones distributed among the seats. I didn’t happen to find one at first, and sat through another talk in Russian understanding almost nothing, this time by a philosophy professor who began by saying he’d do it in Russian first and then Lithuanian. Apparently he spoke too long because the Lithuanian never came. I did catch the words “simulacra” and “essentialism” and guessed from the body language of the audience that it didn’t make a lot of sense to those with a good command of Russian either. Both speakers said something about Russian president Putin, and the Russian ambassador wasn’t in attendance, so I guessed the comments were  probably not positive.

After a lunch break a new panel formed at the table in front. By then the audience was much sparser. As usual, the diplomatic corps cannot stay for the whole day, and after paying respects in the morning need to get back to their desks. For that or other reasons, a mostly full hall had become half empty when the topic switched from the morning’s Soviet to the afternoon’s Nazi and fascist related issues.

From the start the people on the panel looked like they were expecting to be attacked. Ronaldas Račinskas, the de-facto head of Lithuanian Holocaust obfuscation efforts, was the moderator, with parliamentary Foreign Affairs Committee chairman Emanuelis Zingeris, US State Department special envoy to monitor and combat anti-Semitism Hannah Rosenthal, Professor Irena Veisaitė and Professor Šarūnas Liekis as speakers.

A word about body language seems appropriate here. As the seconds wore on, moderator Račinskas went from a poised and suave demeanor to stiff and jerky. The speakers at the table began to hunker down. Račinskas began to actually change color, his face turned red and patchy, but it didn’t look like a wholesome blush. In fact, the overall effect was that he was turning into a ventriloquist’s doll employing some very great talents as a method actor. The panelists began to look like the emergency committee who kidnapped Gorbachev and went on Soviet television to announce their coup. I mention this because I remember that Gary Kasparov, who was then just the famous Soviet chess champion, commented based on the emergency committee’s body language that their coup was doomed to failure. Kasparov was right, of course, and the panelists weren’t exactly as bumbling as the putchists, but there was some similarity, some sense of a siege mentality at work.

Their words bore this impression out. Emanuelis Zingeris spoke — with a tortured attempt to keep a pious expression on his face — about post-Soviet Lithuania not recognizing the Lithuanian Nazi government who claimed power in June, 1941. It is perhaps an important point that post-1991 Lithuania did not recognize the Nazi government as legitimate, but it seemed a little bit of an arcane subject on which to speak; he probably did so in an effort to try to “fix” the Lithuanian parliament’s financing a series of 2011 events to actually honor the local murderers of 1941 as some kind of heroes or rebels, and it would have done Lithuania much more good had he simply disagreed with that policy in a straightforward way. He also spoke about the progress Lithuania has made in Holocaust education. According to Zingeris, during Lithuanian Holocaust Remembrance Day Lithuanian school children on their own initiative, without any direction from parliament, government or anyone else, read lists of names of Jews who were murdered in the Holocaust in Lithuania. I believe he also said that Tolerance Day, November 16th, was being observed at schools around Lithuania. (I asked a school pupil I know if she had heard anything about Tolerance Day, she hadn’t, but one instance doesn’t mean it isn’t true, I suppose). 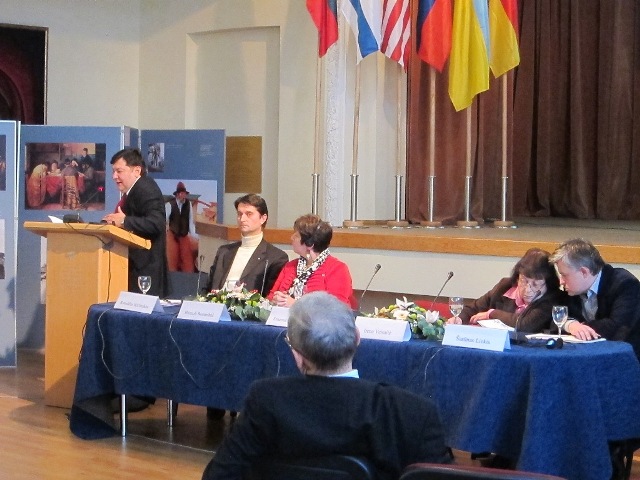 Hannah Rosenthal from the US State Department delivered a sort of Obama-esque message of hope and change, completely empty words, and spoke about members of her family who had suffered Kristallnacht in Germany. “It’s not enough [to have these rights enumerated in laws and national constitutions], we have to get [police and the courts] to understand them,” she said.

One felt sorry to see Ms. Rosenthal so pleasantly surrounded by the crack Jewish-Affairs-Manipulation-Unit Lithuanian government approved minders who would be insulating her from hearing any other opinion during her visit to Lithuania, or God forbid, from meeting a Holocaust survivor not approved by state-salaried PR mavens.  My eyes penetrated her splendid isolation, the cocoon formed by her government handlers like the gaggle of Intourist guides through the safer neighborhoods in the nine rings of hell.

Professor Irena Veisaitė continued the theme of hope, change and progress in building socialism er I mean Holocaust education in Lithuania. She claimed much progress had been made and that it was unhelpful for Jews and others to criticize Lithuania. She spoke about “building bridges” and said she hoped that Jews wanted to build bridges to understanding Lithuanians, too.

Professor Šarūnas Liekis surprised me at least by delivering some straight talk about Lithuanian nationalism. His delivery was quick and to the point and without putting on airs. He said it wasn’t right for Lithuanians and especially not Lithuanian politicians to equate ethnic pride or “tautiskumas” with pride in country, patriotism. He pointed out the concept of “tautiskumas” originated in German volkish ideologies which have long since been condemned, and said “soil and blood” ought to be replaced with “soil and state” and also pointed out that he’s observed a lot of ethnic-identity building based on exclusivity, intolerance, divisiveness or outright hatred in Central and Eastern Europe.

Račinskas, at this point fully in the role of ventriloquist’s dummy, made some comment about black, white and shades of grey, then opened it up for audience participation.

As if sent by higher powers to challenge Veisaitė’s  (and Rosenthal’s) image of linear progress on the understanding of the Holocaust in Lithuania, an elderly man in the audience seized the opportunity for asking questions and introduced himself as a member of a Lithuanian family who rescued Jews. He then proceeded to make outrageous statements — that one million Lithuanians perished during World War II, that by percent many more Lithuanians had died than Jews — and to generally show off the sort of ignorance fashionable in Lithuanian nationalist circles intent on belittling the Holocaust.

Markas Zingeris, director of the Tolerance Center and Emanuelis Zingeris’s brother, rose to the occasion and patiently asked the man to make inquiries into the actual history. He said there are different narratives, but that we have to agree to a common denominator provided by the known facts and statistics. Račinskas suddenly emerged from his wooden shell and volunteered that “statistically speaking” the man wasn’t correct. Emanuelis Zingeris also attempted to respond briefly, but couldn’t and instead spoke at length about something else. I got the impression he was reading the UN Charter on Human Rights from the screen of his mobile phone, but can’t be sure.

This was followed by a coffee break, then the next panel of speakers.

The best speech of the day was delivered by Simon Gurevich (Simonas Gurevičius), a young man who works as administrator of  the Lithuanian Jewish community (why wasn’t he or another genuine representative of the Jewish community on the previous panel dedicated to the Jewish topic?). He spoke about his love for Lithuania and his own experiences of antisemitism as a Jew in Lithuania, and his sincere and emotional speech was almost self-contradictory at times, but no worse for wear because of it. He said, for example, that an independent Lithuania was the precondition allowing Jews to worship freely, but said he himself knows it can be dangerous to wear a yarmulke in public. He spoke about having a swastika painted on his car, and his windows broken (I think he said because he dared place a menorah on a window sill), but that his family spoke Yiddish, at least at home. It was sort of a bitter-sweet tour de force of one man’s experience, with but’s and and’s that gave the impression of being one hundred percent genuine, from the heart, and without political calculation of any kind. He also spoke out against the targeting of Holocaust survivors who survived by becoming anti-Nazi partisans, which is more than the US Special Envoy for fighting antisemitism managed to say, even though making such a statement would have zero consequences for her, unlike Simon Gurevich who has to live in Lithuania, or has chosen to.

Simon Gurevich of the Jewish Community of Lithuania addresses the conference

Ms. Rosenthal’s failure to utter a single word of criticism (or polite advice) concerning the Lithuanian government’s recent record on antisemitism seemed rather more extraordinary as the day wore on, especially after Mr. Gurevich’s courageous, spirited, yet diplomatically balanced presentation.

It seems almost ironic that Liekis’s words about building ethnic identity based on disparagement of other ethnicities in a sense happened right there at the Tolerance Center on Tolerance Day. It wasn’t an ethnic identity that was being formed, of course, but, hopefully, a recognition of so-called common denominators. Because the panelists only emerged in their own element thanks to the contrast so dutifully provided by a Lithuanian nationalist attempting to disseminate disinformation from the floor.