See DH’s new section on New Britain, Connecticut. Coming soon: Evidence that the project and finance originate not with the local Lithuanian church and community, but the Lithuanian Consulate in New York…

This is not a “Lithuanian-Jewish issue”. One of Lithuania’s leading ethicists, Evaldas Balčiūnas leads the way for people of good will in his 2014 and 2017 essays on the figure for whom the New Britain monument is planned.

Proposed monument in New Britain is for a figure, Adolfas Ramanauskas, who boasted in his own memoirs that he led the (pro-Hitler) militia in the Lithuanian town of Druskenik (now Druskininkai) in June and July 1941, when these groups began to murder the country’s Jews even before the German invaders managed to set up their administration. Nowadays, his image is the first on the neo-Nazis’ front banner, along with other proven and alleged Holocaust collaborators. It was the lead banner in Vilnius for the torchlit fascist parade of 16 February 2018. Is that the kind of symbolism New Britain is looking for? It certainly doesn’t do any justice to modern, successful, democratic Lithuania which has a huge array of great men and women who can be celebrated by all. 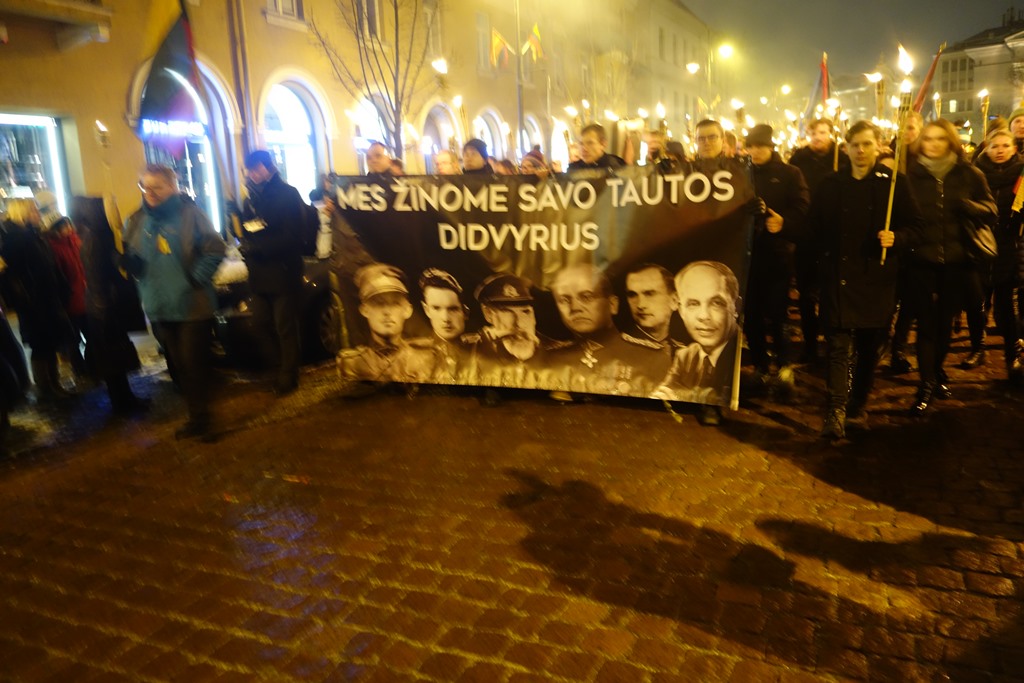 “We know who our nation’s heroes are” reads one of the most popular neo-Nazi banners in Lithuania, causing excruciating pain to Holocaust survivors and their families, as if to revel in the ethnic purity attained by the Holocaust. The six persons pictured, from left to right, are: Adolfas Ramanauskas-Vanagas (slated for a memorial statue in New Britain, Connecticut!),  Jonas Noreika,  Povilas Plechavičius,  Kazys Škirpa,  Antanas Baltūsis-Žvejas, and  Juozas Ambrazevičius-Brazaitis. This image is from the 16 February 2018 torchlit neo-Nazi parade in the heart of Vilnius’s Old Town. At the parade’s conclusion, the keynote speaker, from Estonia, called for “one thousand years of ethnic purity”.