Posted on 26 January 2015 by Defending History

For some reason held on 26 January, a day before International Holocaust Remembrance Day, three events were announced together in a flyer posted by the Jewish Community of Lithuania and disseminated by other interested organizations in Vilnius.

The main event, by any standard, was the second of the three, held at 4 PM at the Jewish Community’s headquarters at Pylimo 4. It was the annual program of commemoration meticulously organized and chaired by Masha Grodnik (Grodnikienė), longtime deputy chairperson of the Jewish Community. A rich and meaningful program, it lasted for precisely an hour, with each minute planned. It was framed, at the start, by the national anthems splendidly rendered by the famed opera star, tenor Rafailis Karpis, himself a member of the community’s board, and at its end, by the recital of Jewish memorial prayers, culminating in Kaddish, movingly rendered by the Choral Synagogue’s beloved cantor Shmuel Yusem.

Ms. Grodnik opened the program by announcing that Holocaust Remembrance Day commemorates the 27 January 1945 liberation of Auschwitz by the Soviet Union’s Red Army. That one sentence made clear that this event would not be one of the many obfuscatory diversions that have proliferated in recent days in Eastern Europe, with controversy centered on the invitation list at Auschwitz, Poland, itself. A highlight was the introduction to Vilnius of the new Israeli ambassador-designate, HE Amir Maimon, who had arrived, he told the packed hall, several hours earlier.

There was a  trilingual (Lithuanian, Russian, English) talk by the chairperson of the community, Faina Kukliansky that succinctly stressed the overarching importance of the day’s remaining in the world’s — not just Jewish — consciousness. There were condensed talks by Holocaust survivor Tuvia Yafet (Tobias Jafetas), honors for valiant Lithuanian rescuers (Righteous of the Nations), and a representative of the Roma community who introduced the standing-room-only hall to the genocide of Roma during the Holocaust. One omission was failure to bring from Svintsyán (Švenčionys) the Auschwitz survivor Meyshke Preis (Misha Preisas), whom Defending History visited the day before the event. However, coinciding with the event, the community website’s editor, Ilona Rūkienė posted her extended article on Mr. Preis and his life based on her own recent visit with him in Svintsyán. Another omission was of at least one talk or reading in Yiddish, as in previous years.

It was an outstanding, moving, and meticulously organized event, in the long and proud tradition of the Jewish Community of Lithuania.

Unfortunately, the same cannot be said for the first and third events: the 11 AM reading of names of Holocaust victims in the synagogue, and the 5:30 PM book launch for a new volume on the Shavl (Šiauliai) Ghetto produced by the far-right and often antisemitic Genocide and Resistance Research Center of Lithuania, known locally for short as the Genocide Center. For years it employed as a top “specialist” one of the prime organizers of Vilnius’s annual neo-Nazi marches.

The 11 AM reading of names event in the Choral Synagogue was virtually empty. Except for the class of pupils organized by the Sholem Aleichem school, attendance was under five people total (maximum two at any one time), leaving a wholly empty synagogue for the reading. The idea was introduced several years ago by a Christian church that filled its premises with enthusiastic Lithuanian citizens who wanted to participate. Something went wrong.

But non-attendance, especially at a morning event, and one that has to compete with a major event later in the day, is largely an administrative issue. What was shocking was something else.

The names of victims were not read from the Jewish museum’s book of Vilna Ghetto victims, or from any of the lists of victims from hundreds of Lithuanian towns that are appended to so many of the yizker books (Holocaust remembrance volumes focused on a single town or region). Instead, the names that “looked Jewish” were marked in pencil in a copy of one of the Genocide Center’s “mix-and-match” Double Genocide manifestoes, its 1992 Genocide of Lithuanian People, that mixes deportation to Siberia by the Soviets with the Holocaust, conflates all kinds of victimhood into “genocide” and is the last thing that should defile the one and only surviving prewar Jewish prayerhouse in Vilna. The people on site did not attempt to justify the use of this book for a Holocaust memorial event on Holocaust Remembrance Day at Vilnius’s one surviving prewar synagogue. 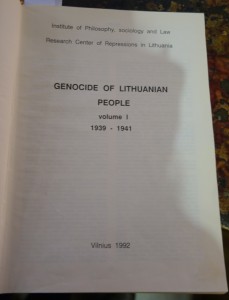 It was explained that “someone” gave them this book to use for the event. The book, with its pencilled in marks on Jewish-looking names, should be duly returned to the same “someone.”

The third and final event was the book launch and open discussion on the new volume on the Shavl Ghetto by the Genocide Center’s Dr. Arūnas Bubnys, a nationalist historian who publishes in far-right pro-fascist publications, and has characterized the scholarship on violence by LAF (Lithuanian Activist Front) militants against Jewish civilians before the arrival of German forces as the opinion of just “Israeli” (read: Jewish) scholars. He has supported re-erection of a monument glorifying various local Hitlerist forces. His earlier book on the Vilna Ghetto was reviewed on these pages.

A report on the event for Defending History by a local scholar who attended the event for DH, will soon appear on these pages [update: see Julius Norwilla’s report]. It was an open and fair discussion with members of the audience invited and encouraged to speak up by the event’s chairperson, Faina Kukliansky, the chairperson of the Jewish Community who ensured that any who wanted to speak up could do so.

The evening produced its genuine hero. In her eloquent response, delivered in Russian, Evgenia Sedova, a specialist on the Shavl Ghetto at the Jewish museum, and coauthor of a standard 2002 work on the lists of its prisoners, explained a lot of what is wrong with the new book as she confronted the genocide maestro and thereby incidentally redeemed the community’s honor.

But for now, we can only express our deeply held hope that in the future the Jewish Community will be careful not to inadvertently and obliquely confer legitimacy on one of the engines of Double Genocide revisionism of the Holocaust.

More on the Genocide Center here. The Center is responsible for the content of the Genocide Museum in Vilnius and Gruto Parkas (The “Lenin Park”), both of which contain shameful antisemitic content. Its own website continues to boast some of the most perverse musings in a genre that might best be characterized as State-Sponsored Holocaust Envy (copy here). One of the gems: “Although an impressive percentage of the Jews were killed by the Nazis, their ethnic group survived, established its own extremely national state and continuously grew stronger. Therefore, although a huge percentage of killed group members may indicate the cruelty of the oppressor, more complicated methods are needed to estimate the real results of genocide for the group as the entity. Much more time has to pass until the results of the Soviet genocide of the Lithuanian populus will be estimated.”

A table in the adjoining hall, where refreshments were served, featured Genocide Center publications for sale. Only Genocide Center publications. Perhaps in future years, these might be replaced by some of the excellent publications of the Jewish museum, not to mention the international standard Holocaust works by such authors as Martin Gilbert and Yitzhak Arad, and foreign books specifically on the Lithuanian Holocaust, including Karen Sutton’s Massacre of the Jews of Lithuania. 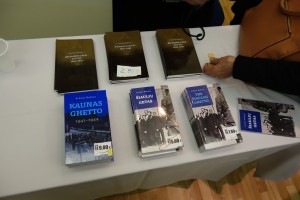 It was especially sad that the table did not include books by members of this selfsame small Jewish community who have over the years contributed so very much to the study of the Lithuanian Holocaust. These include Rachel Kostanian’s Spiritual Resistance in the Vilna Ghetto, the memoir of Dr. Rachel Margolis, A Flash of Light in the Darkness (in Russian and English editions), and Joseph Levinson’s The Shoah in Lithuania (available in Lithuanian and English editions), Irina Guzenberg and Evsey Tseitlin’s Vilnius Ghetto: Lists of Prisoners, and various others.

The Genocide Center and its allies in the ultranationalist camps of Eastern Europe would of course like nothing more than for International Holocaust Remembrance Day (27 January), marking the liberation of Auschwitz in 1945 by the Red Army, to disappear from the planet, and be replaced by the Prague Declaration’s demanded mix-and-match day (23 August) which makes a jumble of Nazi and Soviet crimes in the worst spirit of Double Genocide confusionism. Only three short years ago, eight bold Lithuanian parliamentarians were among the seventy European signatories of its counter-document, the Seventy Years Declaration. Perhaps some of them can be included in next year’s remembrance events?