Posted on 5 October 2017 by Defending History

VILNIUS—In comments reported today by the Lithuanian press service ELTA, the nation’s prime minister, Saulius Skvernelis has announced and hailed the decision to proceed with a national convention center in the heart of the old Vilna Jewish cemetery as one that “will lift the Lithuanian capital to a higher level of competitiveness in tourism.” He also notes that “the lack of a modern congress center in Vilnius is the main obstacle for the development of conference tourism in Lithuania,” not mentioning that there are numerous alternative sites for much more rapid and hassle-free construction of such a center.

It is frequently noted here that far from bringing honor to Vilnius and Lithuania, the conference center on the old Jewish cemetery project will bring generations of protest and ongoing instances of prominent persons of conscience from around the world refusing to appear in the building as a matter of principle. It is not only a matter of sentiment relating to the murder of 96.4% of Lithuanian Jewry during the Holocaust, because of which there are no local descendants to fight for their ancestors’ graves. It is also a current livewire human rights and racism issue. There is little disagreement that in the event of a medieval Lithuanian or Christian cemetery that still contained remains of many thousands of Citizens of Vilnius, no such project would even be discussed. 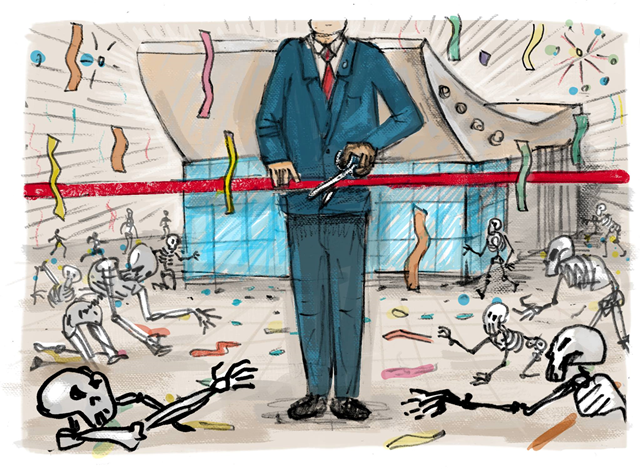 The saga has been worsened by the alleged moral corruption of a London based group of “grave trading rabbis,” the CPJCE (“Committee for the Preservation of Jewish Cemeteries in Europe”) who were exposed on Wikileaks for their secretive antics of soliciting money in exchange for supervisions and approvals for building works on cemeteries that are condemned by virtually all bona fide rabbinic authorities on the planet. See reports by Wikileaks, Jerusalem Post, JTA, and Defending History. By contrast, the world’s Lithuanian tradition (Litvak) rabbis have spoken up passionately against desecration of the cemetery. But the CPJCE offers no respect for far greater (Litvak) rabbinical authorities with actual links to the country in question (Lithuania). Many have been begun to ask: Why does the government keep referring to a group of discredited London rabbis, ignoring even the pleas of Lithuania’s own recent rabbis (one of whom was fired for speaking out on the cemetery in 2015)?

Protests against the “convention center in the cemetery” project have come from Jewish and Christian leaders around the world. An international petition has garnered over 40,000 signatures. Last summer 12 United States congressmen added their pained voices. The head of the legitimately elected Vilnius Jewish Community has called for the convention center to be moved elsewhere to avoid all the pain, while the government-sponsored  “Lithuanian Jewish Community” continues to cling to power after stealing last May’s elections via a mid-campaign rule-change guaranteeing “victory” to the incumbent. The Lithuanian courts have already invalidated that rule change potentially rendering the convention-center-cheerleading ersatz Jewish leadership morally and legally illegitimate.

The prime minister’s claim that building a national convention center in the middle of the old Jewish cemetery will “lift” his nation’s capital is surpassed in absurdity only by the CPJCE London-based “graveseller rabbi” claim that the hated, crumbling Soviet dump at the cemetery is for the Lithuanian people the equivalent of the Tower of London and the Statue of Liberty rolled up into one.

Among the Lithuanian intellectuals at the forefront of defending the old Jewish cemetery and all its stands for are Dr. Andrius Kulikauskas of Vilnius Gediminas Technical University, and former Protestant minister Julius Norwilla. In recent months, Norwilla has enabled the production of posters in Lithuanian, Yiddish, and English, in the timeless spirit of multicultural Vilna over the centuries.

In sharp contrast to the growing chorus of international concern, there is continued abject public silence from the American taxpayer supported USCPAHA (“United States Commission for the Preservation of America’s Heritage Abroad”) which exists to preserve foreign cemeteries. Its work has been made much easier by passage of the 2014 Unites States congressional act condemning the desecration of minority cemeteries abroad but it has chosen, mysteriously, to provide cover for the London rabbis and the Vilnius developers who are on the cusp of the worst 21st century desecration of a Jewish cemetery yet. The USPACHA is riddled with other scandals too.

There is, moreover, continuing concern over the potentially toxic cocktail of conflicts of interests of the commission’s member responsible for Lithuania, Herbert Block, who has paid homage to the Satmar rebbe affiliated with the discredited London rabbis of the CPJCE, and has been appointed to various Lithuanian government sponsored boards and bodies. His own illustrious rabbinic ancestors lie in the cemetery and their remains are liable to be under the bars and toilets of the new convention center or to be dismantled under the planned annex. He was recently appointed executive director of the American Zionist Movement. Defending History’s editor, Prof. Dovid Katz said today, “Congratulating my dear old friend Herb Block on his inspiring new appointment at the American Zionist Movement, I again call on Herb to abandon his allegiance to the dubious forces seeking to cash in on a reprehensible convention center project in the heart of the old Vilna Jewish cemetery, and to speak out rapidly and with moral clarity, for the record, for the convention center project to be moved to another venue.”

A full translation of today’s ELTA report follows. ELTA’s original Lithuanian text is available here. It seems that its editors do not want local Lithuanian readers to be aware of the petition, the massive international opposition and, more generally — the other side of the story.

The Government has decided to revive the project of the Vilnius Palace of Concerts and Sports’ reconstruction and adaptation to congresses, conferences, and cultural events.

The Vilnius Congress Center project will be carried out according to a new model in three years. In a meeting, the Government approved the respective proposal of the Ministry of Finance.

Prime Minister Saulius Skvernelis says that the lack of a modern congress center in Vilnius is the main obstacle for the development of conference tourism in Lithuania.

“Our aim is to have a modern and large congress center in Vilnius. It will lift the Lithuanian capital to a higher level of competitiveness in tourism. Together with conference tourism in Vilnius, new business niches could appear, and it would become more attractive to private investments,” said the Prime Minister.

Design and reconstruction works of Vilnius Palace of Concerts and Sports will be subject to two separate processes of public procurement. Although this will take longer, the Government hopes that this way, the project will be carried out in a more rational, cost-effective, and transparent manner.

In 2018, 1.1 million euros are to be assigned from the state budget for preparing the technical project; the latter will show the exact amount of labor and materials necessary, allowing for calculation of the budget of the reconstruction. The designer will be chosen in an open international contest for architects. This is being done in order to select the best concepts of architecture and space adaptation and exploitation for the building.

The Congress Center project will be carried out together with the project of tidying up the Šnipiškės Jewish cemetery territory and commemorating the cemetery,  according to decisions negotiated with the Committee for the Preservation of Jewish Cemeteries in Europe on May 16, 2016.