Seminar topics include “European Memory: Remembrance Beyond the Nation,” “Law and Memory in Central and Eastern Europe,” “Contested Heritage: Museums as Spaces of Negotiation,” “Civil Society: Public Spaces of Memory” and  “Transnational Memory: Anthropological Approaches.” The prime organizer seems to be EHU’s Center for German Studies.

EHU is situated in historic Vilna, once a major Jewish cultural center (until the Holocaust). It is situated in Lithuania, the country with the highest percentage of its Jewish citizens killed in any European country during the Holocaust, and where today, the government has invested heavily in the Double Genocide movement, from its “Red-Brown Commission” to the Prague Declaration of 2008, to an infamous Genocide Center (and downtown museum).

One might have thought there would be a certain sensitivity toward, or even direct mention of Jewish and Holocaust issues in the vast program of seminars covering so many months. But both words seem scarce or missing from any of the paper titles, though to be sure there are a number of participants who hold Judaic Studies positions. Not one of those included is part of  the country’s small Jewish community, and all are somewhat prominent in the government’s “Jewish/Yiddish” studies brigade that is often mobilized, directly or indirectly, in the cause of state Holocaust revisionist policies.

But it would be unfair to say that there is no mention of things Jewish. The word for “memory” appears as part of the poster design in seven languages including Yiddish/Hebrew where the word zikórn (modern Hebrew zikarón [spelling is the same]) appears in original Jewish lettering among the seven languages.

There is however a slight problem. The five letter word is spelled on the poster with six spelling errors, immediately bringing to mind the Yiddish expression: Nóyakh mit zibn grayzn (to write the word “Noah,” which has two letters, with seven mistakes, a hearty challenge for Yiddish students over the generations; thanks to EHU’s Center for German Studies, previously not-thought-of mechanisms for achieving progress are out there for posterity).

The spelling with six errors of the five letter word for “memory” in Yiddish and Hebrew becomes even more amazing when one notes that the (humbly) named Colloquium vilnense features the director of the Vilnius Yiddish [!] Institute, the head of the Center for East European Jewish Studies, and the expert on Jewish studies at the Lithuanian History Institute. They would no doubt rapidly add that in Lithuanian Yiddish and Hebrew dialect, it’s Néyakh mit zibn grayzn, given the love for Litvak lore they profess on international journeys courtesy of the Lithuanian taxpayer.

Presumably the organizers treated the other six languages with rather more respect.

On the issue of universities offering balanced seminars with various points of view in democratic societies, it is lamentable that such a lavish series would not include a single paper on the 2008 Prague Declaration, the Double Genocide movement, the prosecutorial campaign against Jewish partisan veterans of the anti-Nazi resistance, state honors for local Holocaust perpetrators and collaborators (down to street names and university shrines), antisemitism, Holocaust distortion and inversion at state-sponsored museums, or indeed, the 2010 law that makes it a criminal offense in effect to deny the applicability of “genocide” to both Nazi and Soviet crimes. Are these issues themselves beyond the pale to the point where an institution meant to instill democratic and tolerant thinking in its students would avoid discussing them at all costs in paper titles in a long and lavish roster focused mostly on the precisely relevant collective memory issues?

Such episodes go right to the heart of EHU’s mission and are a legitimate question for its leaders and sponsors to raise openly and robustly. After all, the first sentence of its “About” page on the website is: “EHU is the only Belarusian university [situated in Vilnius, Lithuania, in the EU and NATO] that has succeeded in maintaining its independence and commitment to academic freedom.” But the very one-sided Soviet-grade Lukashenkian thinking is sometimes however countered not with the right tool, a love of and respect for diversity of views whether the government likes them or not, but with a mirror-image and much more sophisticatedly engineered far-right Baltic-(ultra)nationalist mode of thinking brimming with Double Genocide terminology (more on this soon) and with a cast of speakers on local (Lithuanian and Baltic) issues who are carefully vetted to exclude non-state thinking on the issues.

Is EHU protecting its seminars from violating the infamous 2010 “red-brown law” in Lithuania (not Belarus…), by disallowing the Western and Jewish narratives of historic World War II memory at the table? Or is there a subtle agenda for just one side of an argument (with exaggerated internal differences, on the one side, to provide the illusion of honest debate)? Indeed the term “transnational memory” is the latest popularized term in the Double Genociders’ lexicon, adding to the already hefty Orwellian arsenal that includes “reconciliation of European histories,” “equal evaluation of totalitarian regimes,” “pan-European model,” “unified history,” “symmetry,”  and other iconic terms for twenty-first century Holocaust trivialization and obfuscation. Will there be even one paper arguing that democratic Europe needs not one “historic truth” dictated by the east of the European Union (“reconciliation of histories”) but a free environment in which robust  — and genuine — academic debate can flourish?

Also meriting observation is the pronounced recent tendency of some German institutions and professors (and a head of state) to find comfort in East European theories that replace the Holocaust in European history (without denying a single death) with the absurdity of “two equal genocides perpetrated by two equal totalitarian regimes.” That in turn leaves behind the curious notion that those who liberated Auschwitz are equivalent to those who committed the genocide there.

As the organizers from EHU’s Center for German Studies do seem intent on including a cosmetic Yiddish word or two for show, let them perhaps consider the sense of A shánde un a khárpe. For something more in the spirit of transcultural unified Euro-discourse, they could try Colloquium Vilnonsense. 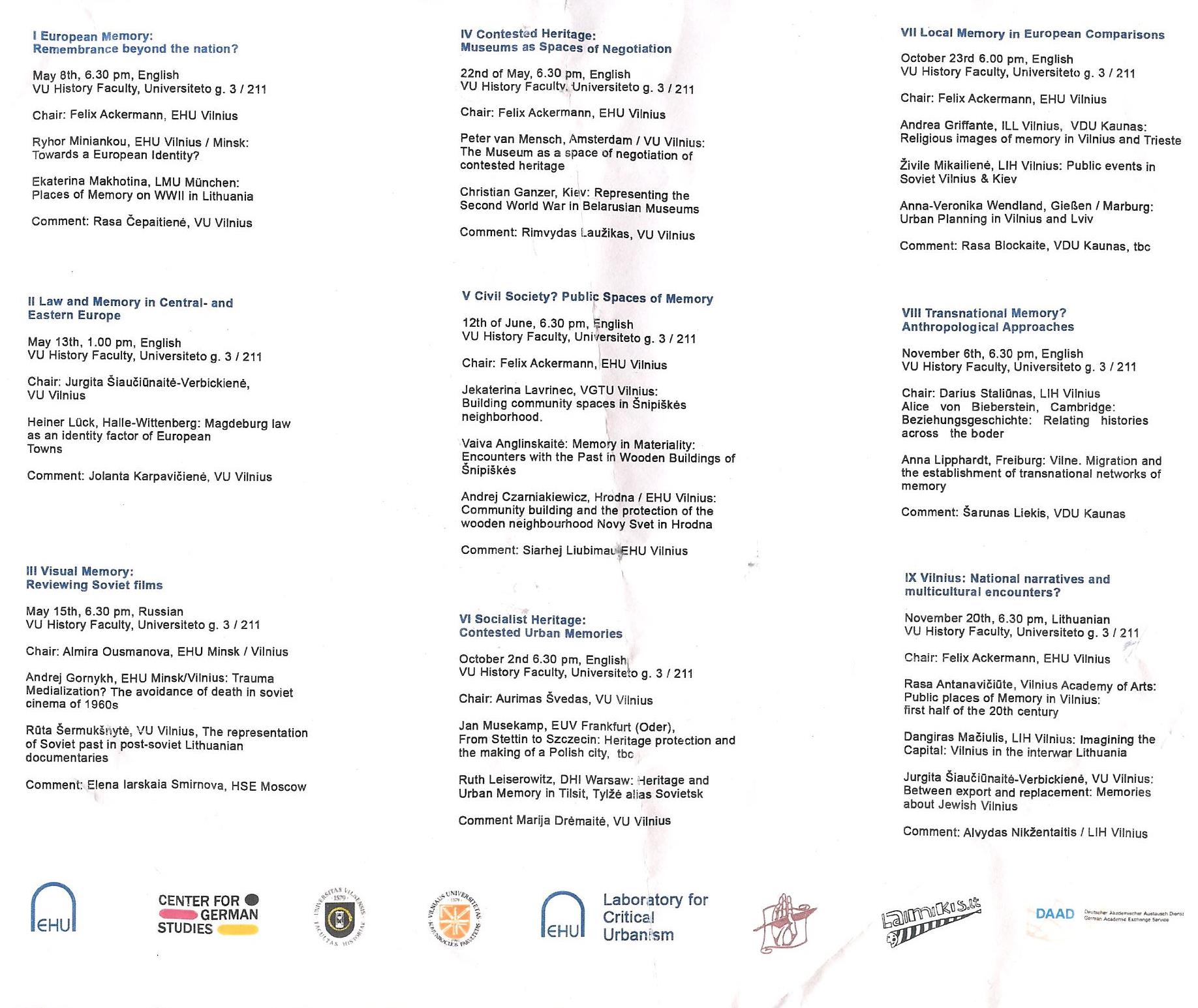