The reverse of the coin features a Hebrew text for “Year of the Gaon” and a transcription of the Israeli rendition of the Gaon of Vilna’s name. (with no inclusion of any element of traditional Litvak and Lithuanian Ashkenazic traditions) Instead of Gaon of Vilna, Yiddish Vilner Goen, Lithuanian Hebrew Ha-go-oyn mi-Vilno, there is only the ultra-Israeli (and gramatically hypercorrect) rendition HA GAON ME VILNA (even modern Hebrew grammar requires “mi-” rather than “me-“). The official state-sponsored Jewish community’s website reports (as PDF) the (very faulty) transcription of a Yiddish idiom on the coin, but even microscopic investigation has thus far failed to find it. (The website also tells readers that the word gaon is derived from Greek, a patent nonsense. It is a root well attested in the Hebrew Bible.) 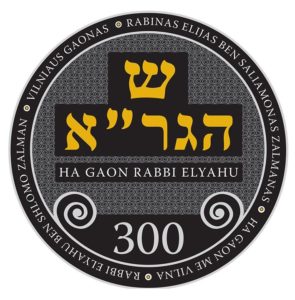 Genuinely good intentions have apparently been undermined by taking bad advice from ultranationalist quarters and in some cases, their ever-enthusiastic agents and honorees. The coin is a pudding of identity theft, disrespect for a culture largely annihilated in the Holocaust, and the total exclusion of the Yiddish language from the English/Israeli Hebrew text surrounding the far right’s recent prime symbol. Even the beloved age old Hebrew and Yiddish spellings for the Jewish name of Vilnius are excluded in favor of current Israeli stylistics. The lamentable symbolic downgrade of Yiddish began here just a few years ago.

See Defending History’s earlier reports on use of the “Lithuanian nationalist combo-menorah” for a postage stamp, and, before that, as proposed symbol for a spiritually vassal “state-sponsored community itself” (aborted after DH’s report and a powerful piece by Vilna-born Holocaust survivor Prof. Pinchos Fridberg; and now again, in context of the coin, flaunted on its website with no second opinion referenced).

As for the nationalist symbol itself, it is not inherently an antisemitic symbol. Indeed, the symbol’s name Columns (or: Pillars) of Gediminas invokes the personality of one of the most beloved Grand Duchy of Lithuania leaders whom Jewish (and many other) people hailing from the Lithuanian lands continue to remember with the greatest of esteem and affection. But Gediminas would be the first to recoil in his grave at anything even indirectly or posthumously related to him being used as the symbol of ultranationalist groups riddled with antisemitism, Holocaust distortion and hatred of minorities.

When the symbol occurs in medieval forms and contexts, in interwar contexts, and today on official government agency emblems, it is benign and legitimate. The point is that in recent years and decades it has been weaponized as a symbol beloved of the antisemitic far right. Nowadays it is the symbol of choice, when organizing something new, for just such groups, not for groups that advocate tolerance and inclusiveness. Symbols are what they become. Did anybody do a survey of views of today’s Jewish citizens of Lithuania as to whether this (whole) symbol plonked inside a (hollowed-out) menorah is a sensitive harmony-inducing choice for the “Year of the Gaon of Vilna”? What would be the reaction if an analogous combo signifying mutilated and hollowed out traditional symbol recast as flowerpot for the nationalists’ favorite would be issued as a coin to “honor” the Belarusian, Karaimic, Polish, Roma, Russian, and Tatar minorities here in Lithuania? A scientific survey by social scientists could yield interesting results.

It is a logo over which democratic and peaceful women’s rights campaigners have been prosecuted in recent years for “desecrating” (these kangaroo prosecutions resulting from far right pressures). It is one which a far right political candidate in recent years used on his poster right along with his swastikas. Is it coincidence that he chose this out of the array of national symbols on the menu?

It is a symbol prominent in neo-Nazi parades in our own times. It is also the symbol “added” to the swastika to produce the “Lithuanian swastika” (with its added lines). It is the symbol of the neo-Nazi group that in 2017 again targeted Fania Yocheles Brantsovsky, a hero of the free world who fought with the Jewish partisans against the Nazis in the forests of Lithuania:

Historically, it was also a symbol beloved of the 1941 nationalists who carried out much of the butchering of Lithuanian Jewry. Here, on the emblem of the Lithuanian Nationalist Party, during the period in 1941 when it was a cheerleader for genocide of Lithuanian Jewry, embedded in a — swastika. 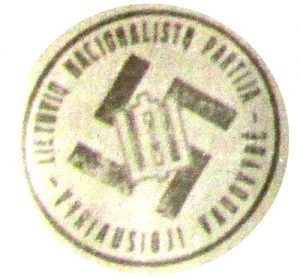 Question of the day: Why does a thriving, successful EU-NATO democracy so rich in magnificent heroes and universally loved symbols (over a thousand years) allow state policies to be manipulated by a small group of far-right Holocaust revisionists who have been “clever” enough to hijack Jewish and Yiddish studies, history, institutions and communities as well as glory-famished foreign “useful Jewish idiots” (known as UJIs)? Here for example, is the Lithuanian state symbol known as the Vytis, which is profoundly revered by Litvaks for many generations (notwithstanding its overt Christian symbology). Over centuries it has become a grand symbol of the Lithuanian Grand Duchy’s tolerance and humanity. The Vytis alongside a menorah (not held up by a hollowed-out menorah!) would bring forth the warmest of good feelings and mutual intercultural respect. 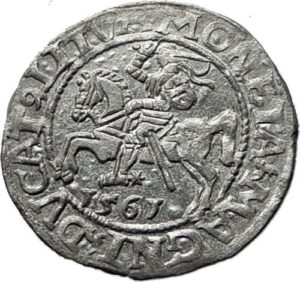 The state-sponsored 2020 “Year of the Gaon” was born of a less-than-holy motive: to deflect criticism of 2018 having been named for an alleged Holocaust collaborator whose proposed monument in New Britain, Connecticut, was summarily rejected by that city’s democratically elected town council. Nevertheless, the celebration of the 300th birthday of the Gaon of Vilna can easily still be rescued to the great benefit of Lithuania and its relationship to its grand Litvak tradition and its tiny living Litvak remnant today. Send this misbegotten coin to the scrap-metal storage. Deal with sincerity, and an open heart, with the seven outstanding issues.

Most urgently, let it be announced proudly and rapidly (and without any pressure from anyone outside), that for the honor of Lithuania, the Old Vilna Jewish cemetery, where many of the Vilna Gaon’s ancestors and descendants still lie buried, will be lovingly restored as a national treasure, and decidedly not become home to a national convention center where folks would clap, cheer, sing and dance surrounded by thousands of Jewish graves on all sides (think equal rights: such would never be the fate of a cherished five-hundred year old cemetery of the majority here). This request has now been joined by nearly fifty thousand people who have put their names to a petition. That petition has been initiated by a heroic and inspiring Vilnius-born Jewish woman, who has worked for years at the Martynas Mažvydas National Library of Lithuania. What more opportune time than the launch of the Gaon year for the government to simply do the right thing. With or without a fancy gold coin.