Posted on 7 July 2017 by Defending History

VILNIUS—For the first time in the history of modern Lithuania, a non-Jewish campaign initiative for a Jewish cause has seen its poster flood the streets of this city’s storied Old Town at the height of the summer tourist season. Conceived and produced by Julius Norwilla (Norvila), a former Protestant minister, using a quote from Dr. Andrius Kulikauskas, a Catholic philosopher, and based on an artistic visualization of a young Vilnius artist who supports the campaign, the poster is entitled “Vilnius Without its Ugliest Soviet Eyesore”. That is a reference to the hated ruin of the Soviet Sports Palace which stands in the middle of the old Vilna cemetery, where the city’s Jewish residents were buried in graves paid for by their families as freehold property, from the 15th to the 19th century. The poster makes reference to Vilnius native Ruta Bloshtein’s international petition, which is, at 40,000 signatures to date, arguably the largest Litvak initiative since the Holocaust. Members of Lithuania’s Jewish community who have spoken out to date include Moyshe Bairak, Ruta Bloshtein, Milan Chersonski, Pinchos Fridberg, Dovid Katz, and Josif Parasonis (more here). Current and recent rabbis in Vilnius who have taken a public stand include Chaim Burshtein, Shmuel Jacob Feffer, Kalev Krelin, and Sholom Ber Krinsky.

Human Rights activists are shocked that the European Union, which is providing millions of euros via “structural funds” for the new convention center, does not itself ask that the project be moved away from Vilna’s sacred old Jewish cemetery (see DH’s section on the EU’s involvement in the desecration of the old Vilna Jewish cemetery; scroll down to bottom for chronological coverage). Earlier this week, the EU’s vice president, Frans Timmermans, met with the official government-approved ersatz “Jewish community leadership” that recently had to allegedly “fake an election” to stay in power, without bothering to meet with a single representative of opposing views, not even the legitimately elected 21 council members of the Vilnius Jewish Community. This is something that can no doubt be made good on Mr. Timmermans’ next trip to Lithuania. He is  First Vice-President of the European Commission and the European Commissioner for the portfolio of Better Regulation, Inter-Institutional Relations, Rule of Law and Charter of Fundamental Rights. Hopefully in the future, his office will take note of the European Union’s own policy on old Jewish cemeteries.

The new poster is becoming a collector’s item almost as quickly as copies are produced. A full translation of the poster’s text follows, followed by the poster’s image. Readers who need copies for distribution are invited to print out the authors’ complimentary PDF (or as image). A translation of the text here is followed by an image of the new poster. The poster’s creator, Julius Norwilla, joined a delegation led by Rabbi L. Kahaneman, dean of the fabled Pónevezh Yeshiva in Bnai Brak, that met last May with Lithuania’s ambassador to Israel. HE Edminas Bagdonas. Mr. Norwilla gave a memorable speech at the event.

Translation of the new poster:

Vilnius Without its Ugliest Soviet Eyesore!

The time has come to demolish the ruins of the largest Soviet eyesore: the Sports Palace.

The time has come to restore the beautiful historic Jewish cemetery of Piramónt in Šnipiškės!

Do we want our children to see what the Grand Dukes and Kings saw from the top of Gediminas Hill, that is, the old Jewish cemetery that can be magnificently restored?

Or do we want them to see what the Soviet Commissars saw? The Palace of Sports built in the middle of a cemetery, a ghoulish building that has been a source of shame for Vilnius and a curse for Lithuania from the very day it was built?

Join 40,000 people from around the world who have already signed the petition for the Old Vilnius Jewish Cemetery! 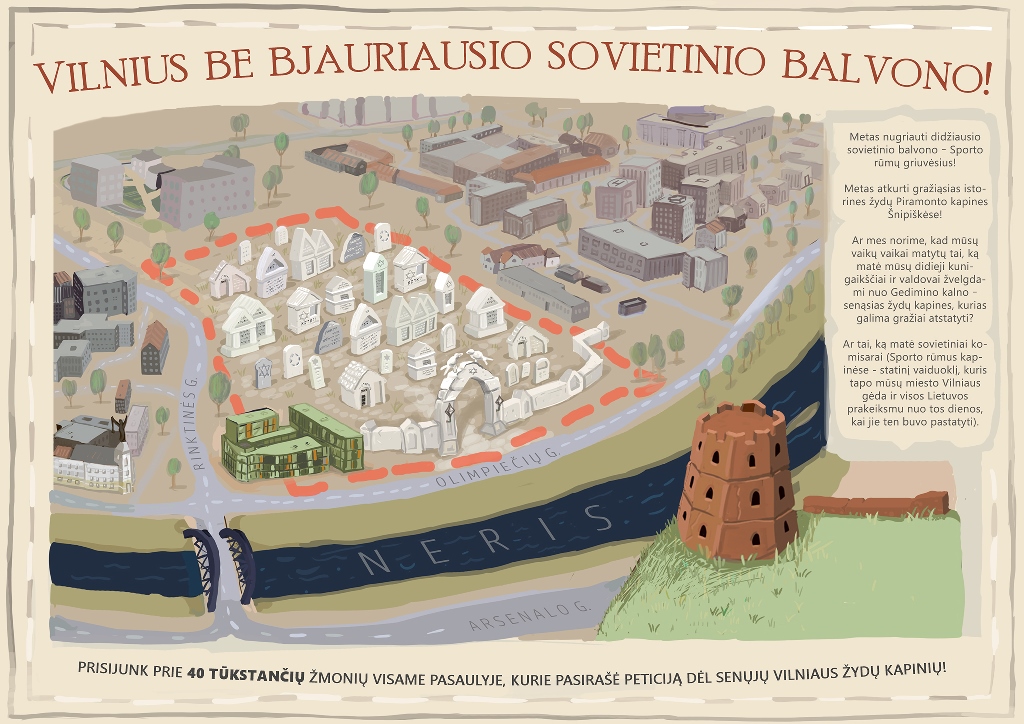