VILNIUS—In one of the most remarkable events in post-Soviet Jewish Lithuania, around a hundred Jewish residents of this city, most of them from younger generations, came today to the Pylimo 4 headquarters of the “official” Jewish community to monitor the quadrennial elections for chairperson of the Jewish Community of Lithuania which they believed to be rigged. First, the rules had been changed right in the middle of the campaign, on 19 April, disenfranchising the small Jewish population of Lithuania by reducing to one vote each Jewish community and abandoning the long-standing formula of 1 vote for 100 persons which gave a voice to actual Jewish people (while retaining one, two or even three votes for various oligarchs from NGOs and other organizations, associations, and entities, including a not-yet built museum in a town with no Jews). That meant that the 2,200 or so Jews of Vilnius would have one vote rather than around 22.

Vilnius District Court today nullified the Lithuanian Jewish Community’s decision to eliminate proportional representation and reduce the electoral weight of Vilnius Jewry to one vote. It offered temporary relief with a right to appeal within seven days. Net moral effect of the decision is to delegitimize the “re-coronation” of the incumbent chairperson.

Also: The “Good Will Foundation” released its latest allocation figures of funds deriving from the communal religious properties of the annihilated Jewish communities. Incredibly, it contains money for the state-sponsored “Red-Brown Commission” that is dedicated to the 2008 Prague Declaration…

Second, the fifteen representatives which the newly elected Vilnius Jewish Community Board designated to attend the election conference were not admitted to the conference. Last Wednesday evening, the VJC elected Simon Gurevich (Simonas Gurevičius) its chairperson. He is the challenger candidate for the national chairpersonship position.

Third, a massive multi-layered security presence (guards in the building wore at least three kinds of fancy uniforms, police and security cars graced the sidewalk outside) added both bad will and farce to a day that will invariably go down in Vilna Jewish history on a number of counts. The Vilnius Jewish Community’s report on the day’s events (in Lithuanian) is available on its Facebook page.

At first, the Vilnius Jews gathered from about 10:30 AM onward (the electoral conference was announced for 11 AM), were not allowed in the building at all. Then, after many arguments with guards and a lot of picture taking, some were allowed into the lobby and told that to attend the conference they would have to sign a confidentiality agreement promising to pay five thousand euros if they violated it. Others were told they’d have to leave their cell phones and cameras with security and some did. But after more than an hour went by and nobody was let in anyway, a group of young Jewish people pushed past the security guards to make it halfway up the stairwell to the second floor where the electoral conference was taking place. Barred from entering by a massive security presence, they  were however allowed up to the third floor where a large screen was projecting the meeting in the Yasha Cheifetz Hall. But one group found a back staircase corridor down to the second floor only to find a security guard behind a glass door there. Some at the electoral meeting told Defending History they could here this group’s shouts of Gėda! (“Shame”). Finally, leadership candidate Simon Gurevich, already elected head of the Vilnius Jewish Community last Wednesday, was allowed into the conference on his own, without the delegation from the newly elected board of the Vilnius Jewish Community. He protested the lack of democracy but was allowed to stay and join the election. Then the video was abruptly shut down and many trickled out of the upstairs “video chamber” over the following hour.

The Defending History team counted over a hundred people among the protest group, but not at any one juncture. There tended to be no more than fifty at any one time with both individuals, families and larger groups coming and going, especially during the latter part of the afternoon, when there was an unobstructed path to the third-floor video room from the main entrance on Pylimo Street.

If the throng of mostly young Jewish people daring to converge on their community to protest a rigged election will remain one potent symbol of the day, it will be balanced out by a second. After the “election” was over and the various regional community heads and NGO and organization chiefs voted nearly unanimously for the incumbent, the eminent attorney Faina Kukliansky, the question became how the news would be released by the community’s media gurus, who have been wallowing in some shame over their antisemitic-style official community website statement of 24 May blasting Vilna Jewry for being “Russian speakers who say they are Jews.” The statement was taken down on the 25th after rapid exposure in Defending History, and replaced by another inappropriate statement, also taken down, and finally, subject of a vague apology on the 26th which did not mention the content, and did not divulge the author or authors of the piece, still unknown (the site is edited by the eminent Lithuanian journalist Ilona Rūkienė). Responses and coverage included Defending History, JTA and many Jewish newspapers internationally which picked up the JTA story by journalist Cnaan Lipshiz, essays by the famed musical educator Leon Kaplan, and Vilna-born Holocaust survivor Professor Pinchos Fridberg [update: now also in English], and extensive Facebook and other social media discourse.

The community’s curiosity was quenched later this evening when Baltic News Service (BNS) carried a formal announcement of the results (English shortened version here) including the text:

Monika Antanaitytė, the director of the Lithuanian Jewish Community secretariat, told BNS that “Faina Kukliansky won with a majority of votes. Electors either voted for Kukliansky, or abstained. No votes were cast in favor of Gurevičius.” She said she was unable to provide the exact breakdown of votes at the current time. […] M. Antanaitytė said that the Lithuanian Jewish Community is an association uniting 27 legal entities, each of which is entitled to attendance by one of its representatives.

Ms. Antanaitytė, the “director of the Lithuanian Jewish Community secretariat” (Jewish people in town have taken to calling it the “Judeo-Kommissariat”)  is, like various of the top people in the official Jewish Community, an official with no Jewish background, no record of personal interest in Jewish culture outside the job, but with some ties to high government figures. She is the daughter of Violeta Gaižauskaitė, an eminent diplomat whose posts have included serving as adviser to former president of Lithuania Valdas Adamkus and as director of the Foreign Ministry’s Department of Information and Public Relations. Over the past year, visitors to the Jewish Community have reported on wisdom heard from Ms. Antanaitytė, including the claim that Chabad Lubavitch “had never been in Lithuania prior to World War II” and perhaps just as shockingly, that today’s Jews just cannot represent themselves anymore, hence the need for the massive non-Jewish official representation in the “Jewish Community of Lithuania”. The larger issue raised is the effective takeover of weak East European Jewish official communities by sectors of the state whose interests differ from those of the surviving minority community members such communities exist to represent.

The twin images of today will be etched in Vilna Jewish lore: the visuals of the dozens of young Jews caring enough to peacefully “storm” their own community building wishing to observe an allegedly rigged election, and the text of a former foreign ministry information director’s daughter’s explanation to BNS and the media that Ms. Kukliansky won, that Mr. Gurevich received zero votes, that she could not yet reveal the breakdown of the vote, while naturally failing to mention the mid-campaign change in the system that disenfranchised the actual living Jews of Lithuania to make her boss’s “reelection” by a closed group of pliant oligarchs a foregone conclusion.

There was a final image too. During the waning hours of the day-long saga, Vilnius Chabad Rabbi Sholom Ber Krinsky, who settled here 23 years ago, came by to gently ask the men waiting in the hallways and the third floor video room whether they wished to don the traditional tefillin (ritual Jewish phylacteries on the head and one arm) and say the brief Jewish prayer “Hear O Israel the Lord Our God is One”. Some humor ensued over the question of which would say yes and which no at this particular juncture and what the real Litvak response might be. It added a touch of sorely needed Jewish content, humor and optimism. 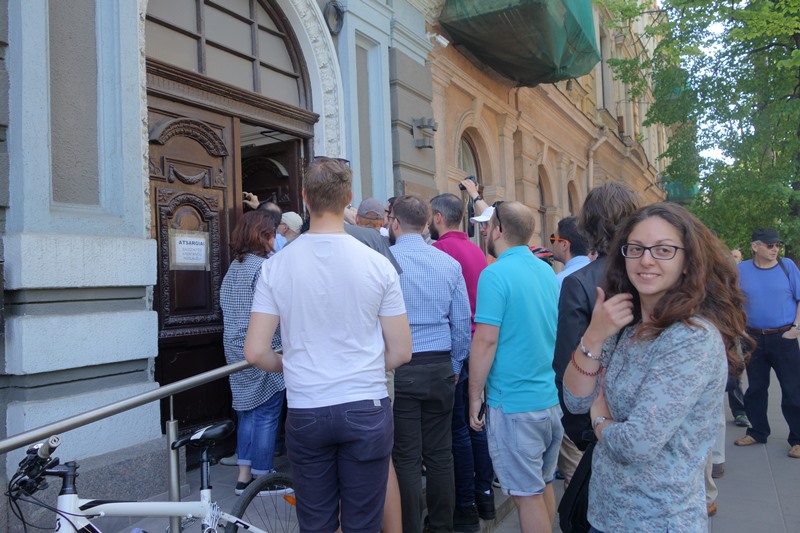 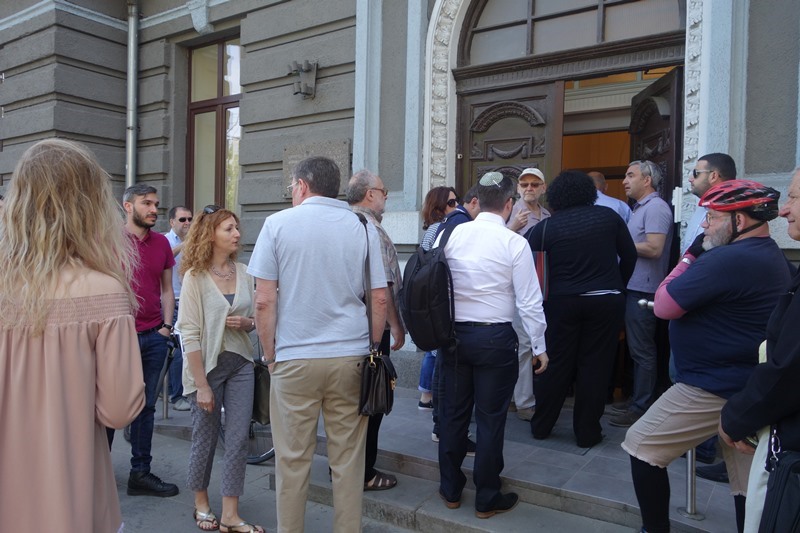 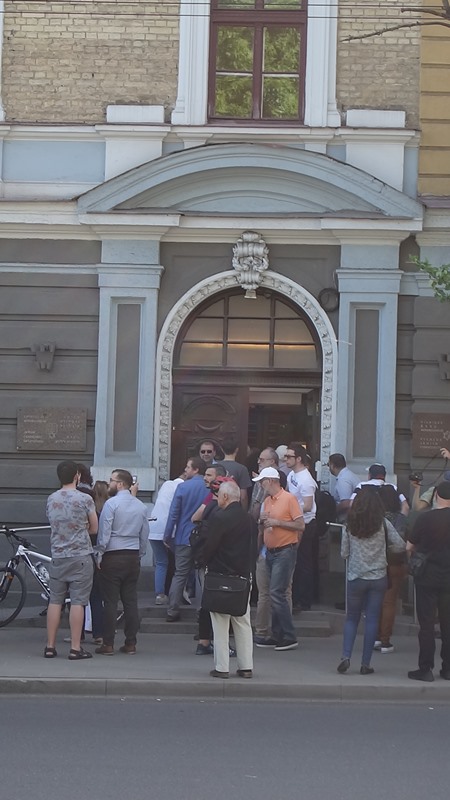 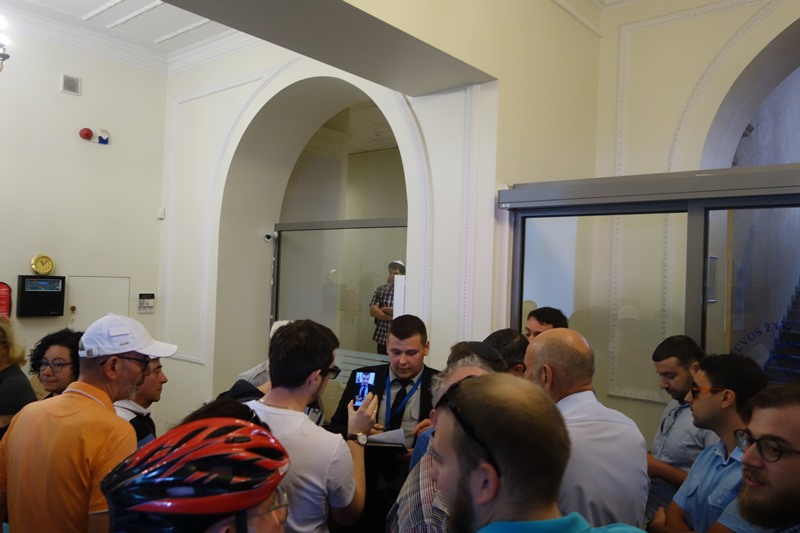 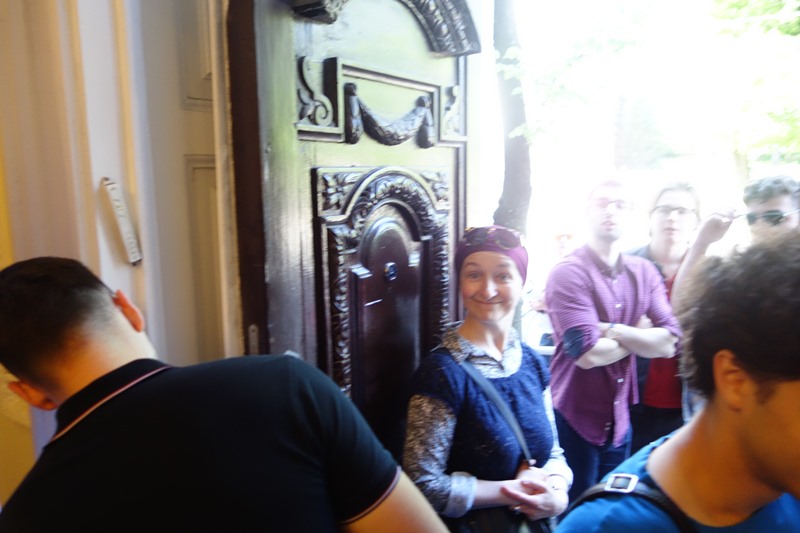 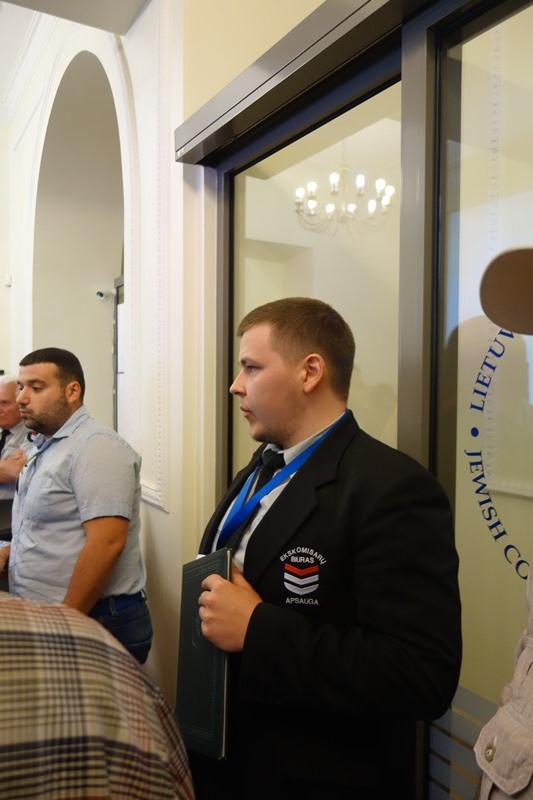 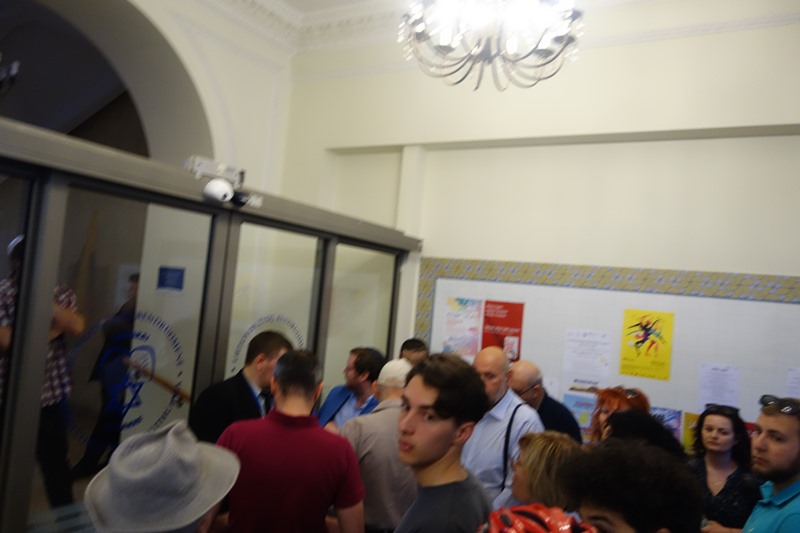 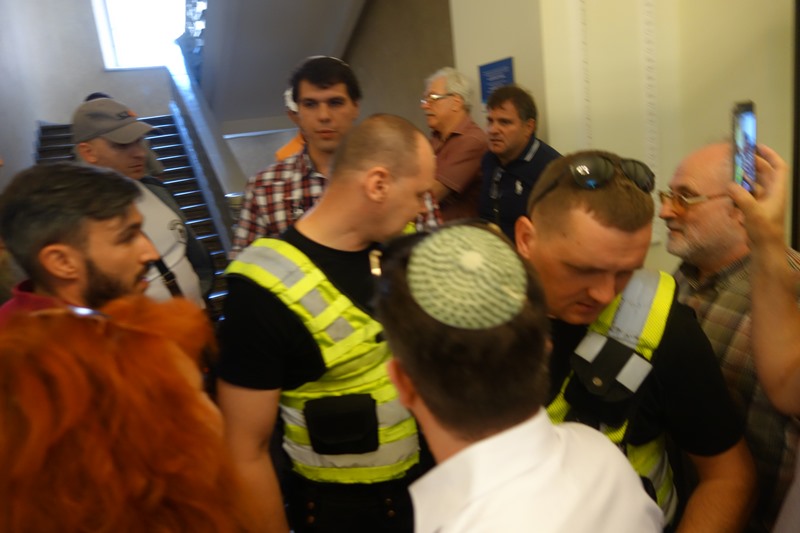 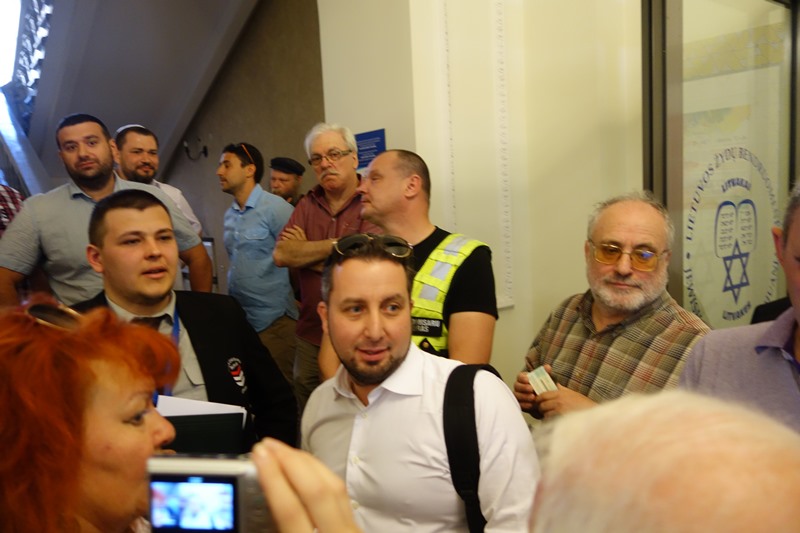 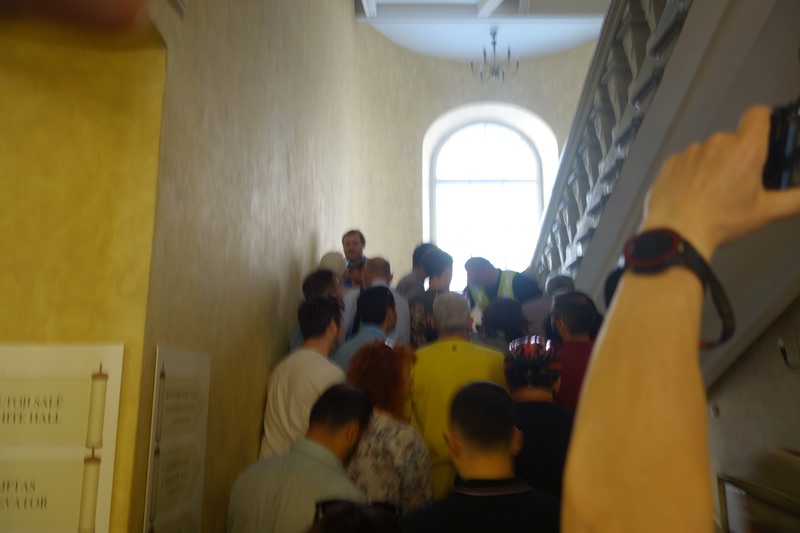 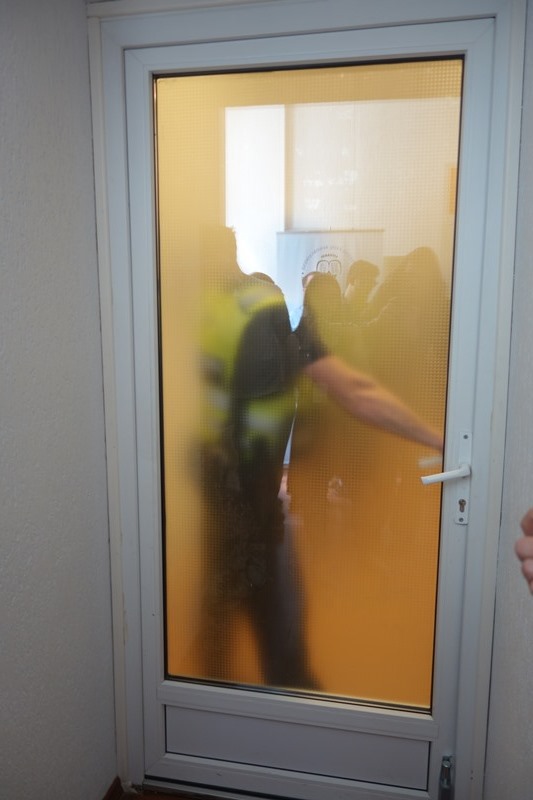 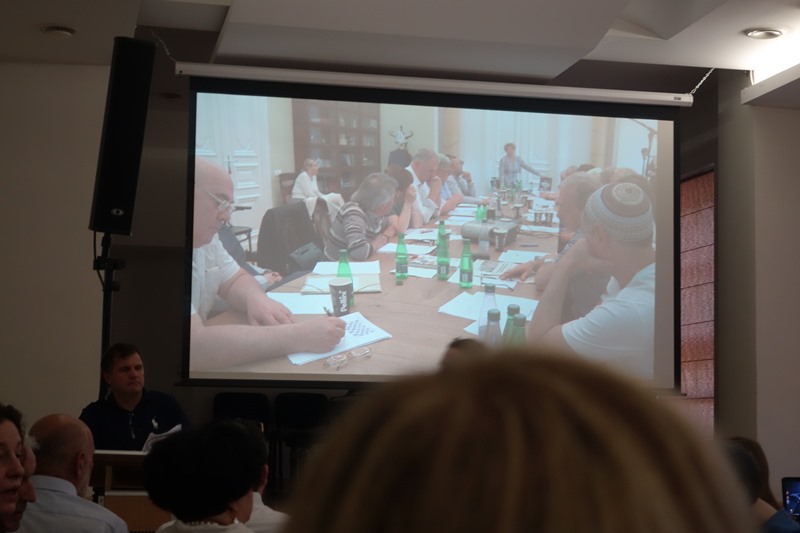 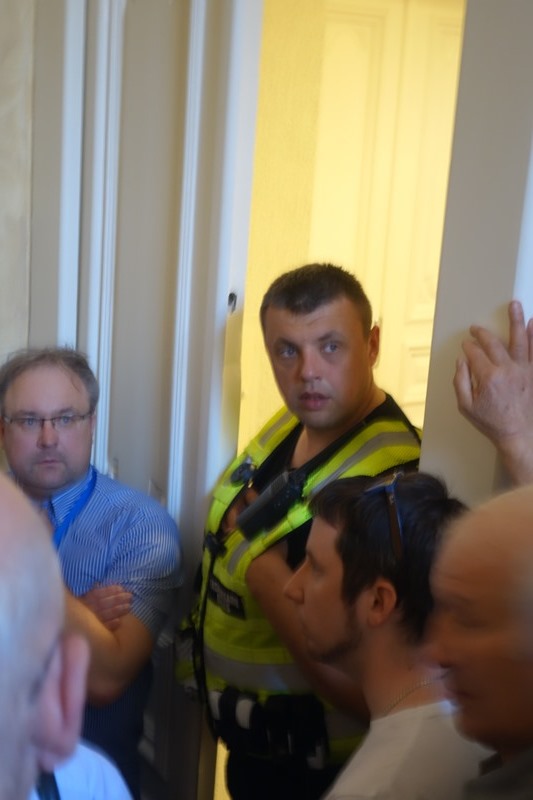 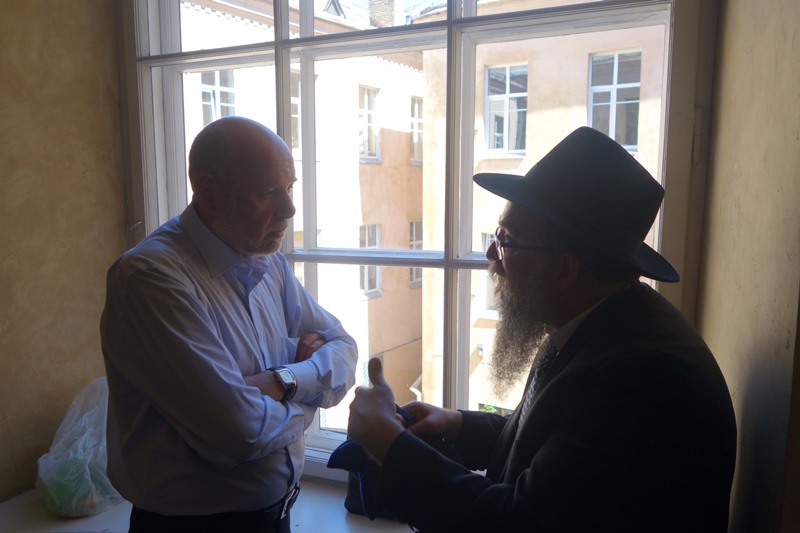