On Tuesday, July 4, 2017, at 11:00 pm, some forty residents of Alytus assembled at Vaclovas Jankauskas’s sculpture garden to welcome a new monument, “For a Person Who Tried to Save a Person” (Žmogui gelbėjusiam žmogų), and to forever honor those who risked all they had to help Jews during the traumatic days and years of the Holocaust. 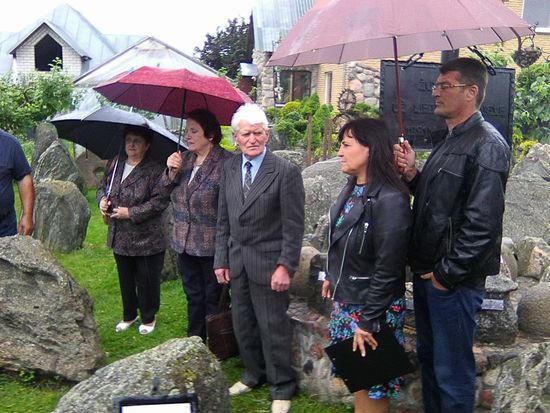 Laima Kalinauskienė read the inscription, “I once asked my father, why did their family take such risks to hide and save Jews. He looked at me and said: Because it was the right thing to do.” 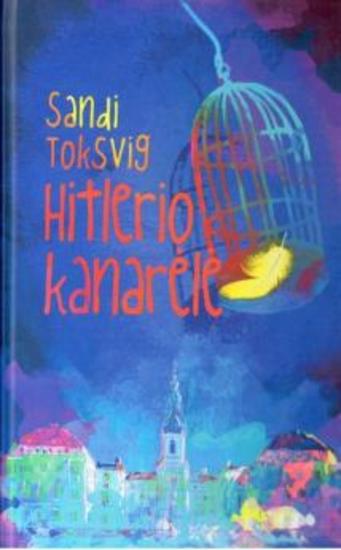 Vaclovas Jankauskas was inspired by this quotation from a translation into Lithuanian of a book by Sandi Toksvig, “Hitler’s Canary” (Hitlerio kanarėlė). She based the book on her father’s stories about the resistance in Nazi-occupied Denmark. 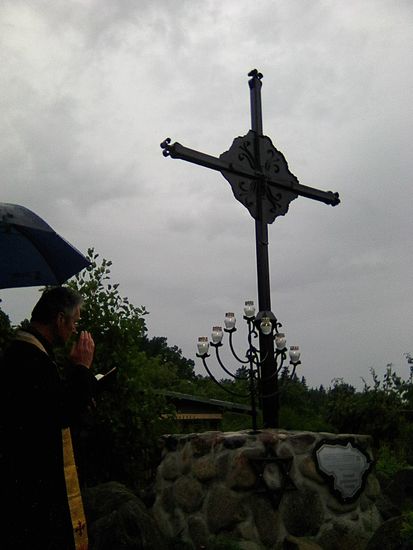 Seven candles were lit on the menorah of the eclectic monument, which also includes a cross, the Star of David, and a map of Lithuania. Vaclovas Jankauskas agreed that two more branches could be added to the menorah. This monument is indeed a symbol of how art brings us together and holds us together. 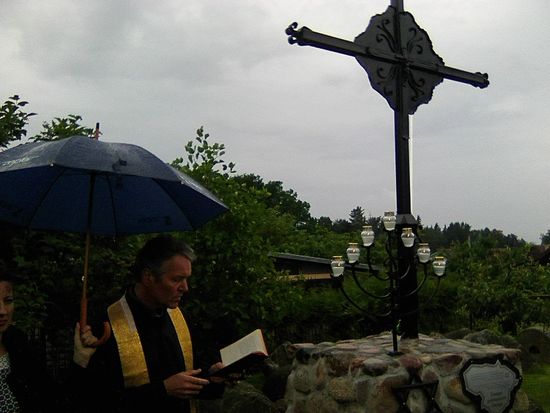 Mons. Liaunas Jakimavičius of Alytus blessed the monument. Then I shared a parable about sparrows who helped a girl, lost in dark woods, in winter time. They made a bread of seeds, and each seed grew into help she needed: a word of encouragement, a bicycle, a warm coat, a sense of direction, a consolation that God doesn’t have to be good, a ray of light that maybe God is good, a coin… And each of us is a good seed.

Ramūnas Bielevičius, advisor to the mayor, shared greetings from Alytus County. Likewise, Vilija Ramanauskiene of the City of Alytus shared greetings. She spoke how she had reached out on the city’s behalf to three Litvak organizations in Israel. One reply haunted her. She learned how a Jewish doctor in Simnas was abused and killed by the very same neighbors whose lives he had once saved. She has come to realize that our only hope for healing is to focus on those who did try to save lives. That’s why this monument is so important. 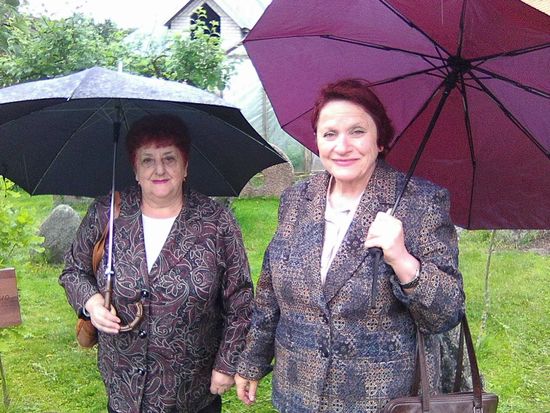 Nadiežda (Necha) Krakovskaja and Rajisa Žilinskienė of Alytus gave special meaning, as members of the Lithuanian Jewish diaspora, with their personal perspective. Rajisa Žilinskienė came from Belarus some fifty years ago. Nadiežda Krakovskaja’s father is a Lithuanian Jew and her mother is Russian. They met during the war when he was fighting as part of the Soviet 16th Division. She spoke about her childhood in Alytus, in the Soviet days, how she could not understand, and nobody ever explained, why other people turned her nationality into a curse word. But she always believed that times would change, and this faith gave her strength. She thanked the current government which found money to start renovation of Alytus’s historic synagogue on Kaunas street. 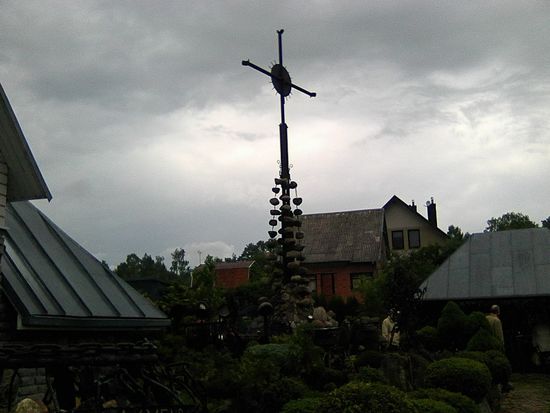 In a phone call, Nadiežda Krakovskaja elaborated that her Jewish identification, as part of a chosen people, helped her be strong inside. She noted how Jews are universally acknowledged for their wisdom and intelligence. They are used to suffering, and that hurts, but they defend themselves with humor and anecdotes. She thinks that many people, not only in Lithuania, are intolerant of the Jewish nation, simply because Jews are different. Jews have their own inner world. This evokes both love and hate. This also makes Jews today careful, even suspicious. 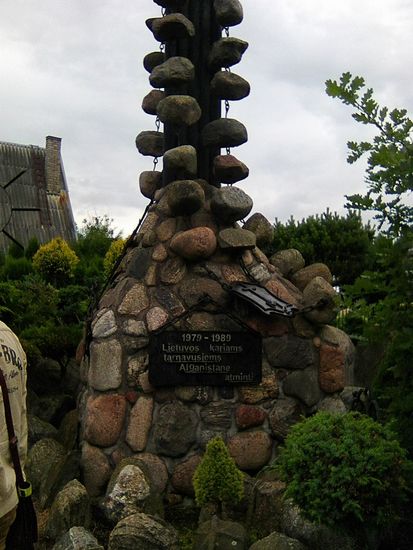 She’s grateful that with Lithuania’s independence, Jews feel free. They can be themselves, express their personalities, and live their own culture among other cultures. This spirit was evident in the sculpture garden, which reflects Vaclovas Jankauskas’s expansive heart. There is a giant litas coin on a pedestal to commemorate Vladas Rafaelis Jurgutis, the leader of Lithuania’s national bank; a cross for Lithuania’s soldiers who served in Afghanistan in 1979-1989; and an oak tree planted by (impeached) President Rolandas Paksas, with his message “A strong Lithuania is made of strong Lithuanians”. 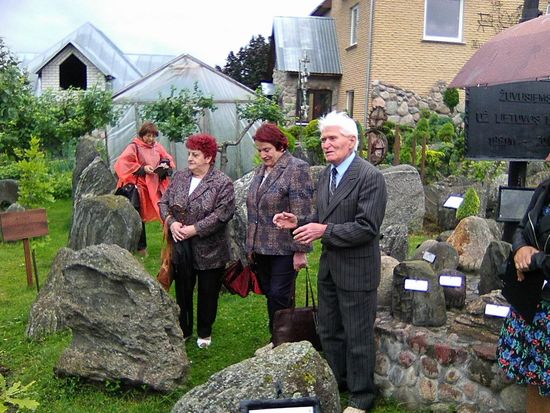 Petras Zamblauskas spoke of his long friendship with Nadiežda’s father. 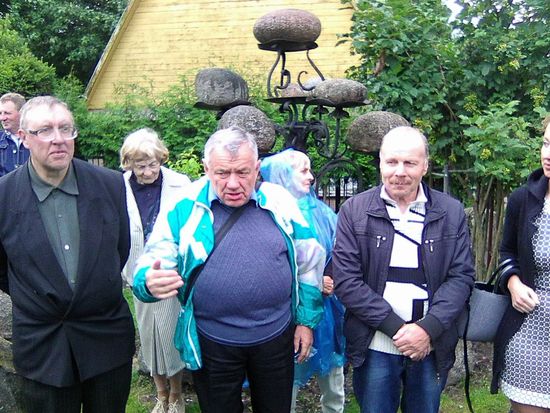 Algimantas Pangonis spoke how Vaclovas Jankauskas had left a positive mark on the village of Eiciunai, the town of Butrimonys, and the city of Alytus. The time had come for the government to honor him. 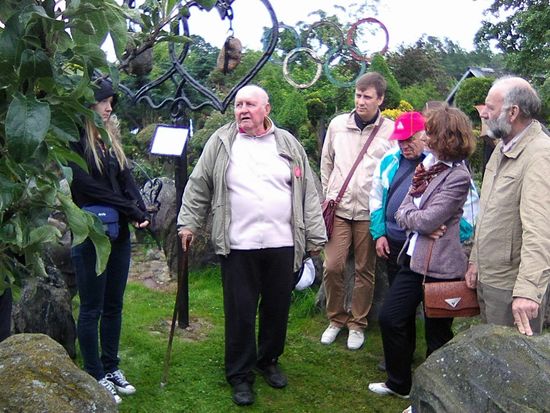 Romas Maksimavičius spoke bluntly of the sad truth that Lithuanians injured and killed their fellow Jews. He specified Dambrauskas of Alytus as an example of a Lithuanian perpetrator. Vaclovas Jankauskas later told me by phone, he hoped that people understood about the Holocaust that it was a tragedy, and we must never forget, and we cannot ever let it happen again. 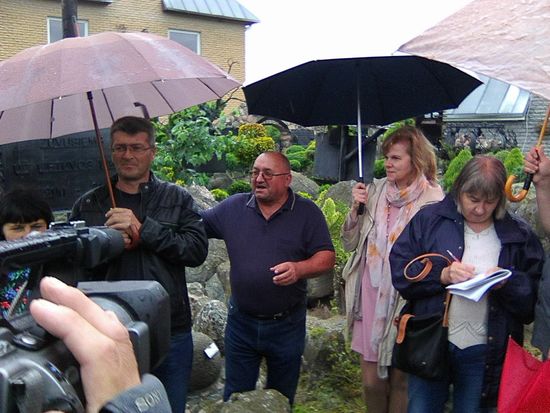 Vaclovas Jankauskas invited all to stay for a meal together. 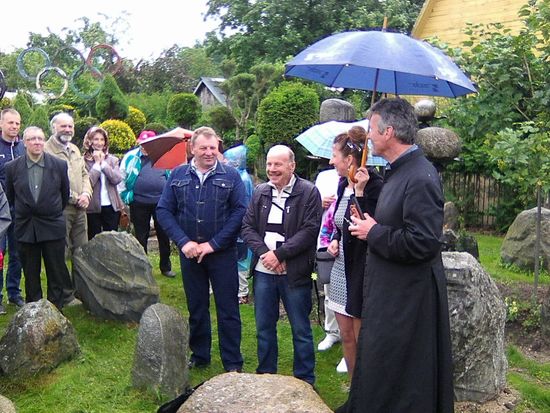 Ana Maizel, Assistant to Israel’s Ambassador to Lithuania, sent his best wishes. He was not able to attend, but he hopes to see the monument on his next visit to Alytus. Monika Antanaitytė likewise sent greetings from the Lithuanian Jewish (Litvak) Community. 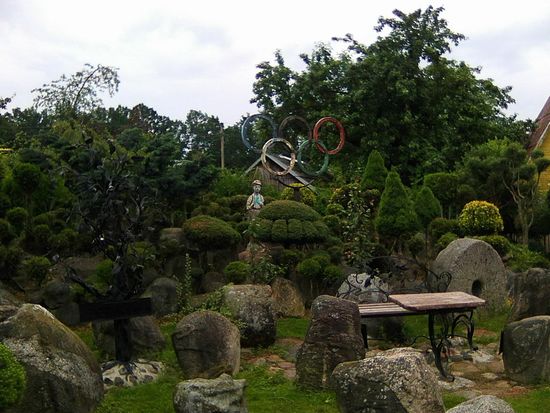 Vaclovas called to say, “Let the Jewish nation know that we love her. We need her. Today, without her, we have lost our way.”

Vaclovas’s museum has a wrought iron basket full of large stones. “Don’t carry a rock under your arm. Throw it here.” 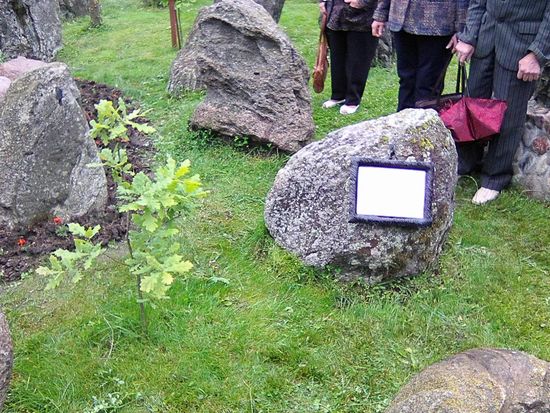 Nadiežda Krakovskaja wrote in the museum book, “Stones are the silent witnesses of our memories. Stones will never let us down. They are a symbol of strength. I bow low before the great man who respects the memory of the Jewish nation’s victims. Shalom, dear man of this earth.”

All are welcome to visit the sculpture garden at Ąžuolo 16, Alytaus kaimas (the village, not the adjacent city).  Please call Vaclovas Jankauskas +3706 987-9077.  The original invitation includes a map.