The handshake moment is placed in the middle, between the scenery at the table and the final posed photo. As a former — and for the rest of my life grateful — student of a Yivo summer course in New York City, I, like my fellow participants, all know Dr. Jonathan Brent as a brilliant scholar and an extremely kind, gentle person who always went out of his way to make us feel at home. His publications and lifetime achievements are stellar. So I squirmed even more, I must confess, when I saw the handshake photo that seems to portray Dr. Brent bowing down to the deputy foreign minister in some medieval government’s audience allocated to some imploring Jewish shtadlan from some distant dominion. Why was this photo chosen for one of the three for publication on our Foreign Ministry’s official website?

At the editor’s suggestion, I’ve removed the images, and mention of the details, of previous photos from East European history that this evoked for me (we can talk about that perhaps at the upcoming Litvak Congress this month, which we’re hoping will be freely open to the public). The circumstances are completely different now. But there is something lingering that leaves me ill at ease. Could we imagine such a scene published say with a Catholic bishop or head of a major cultural institution of an African, Asian or South American people? A foreign business or tech representative? No way. The diplomats are fully aware it would amount to a diplomatic faux pas.

For me, the selection for publication of that particular photo is a sign of a latent ministerial antisemitism and, more widely speaking, disregard for the dignity of minorities everywhere. That I hold Dr. Brent in the highest esteem makes this all the more painful for me when I think back to those happy, unforgettable, scenes representing an apex of spiritual health and plenty that I was privileged to experience in New York City some years ago. I was fortunate enough to be granted the generous Yivo scholarship that enabled me to participate in Yivo’s fabled summer course and study under its truly outstanding faculty. I continue today to study online with some of the same teachers, and have since been teaching an elementary Yiddish class here in Vilnius, both in person and online, thanks to Vilnius’s Jewish Cultural and Information Center in the Old Town, and one semester, with support from the World Jewish Congress’s International Yiddish Center here in Vilnius.

The lively, if checkered, history of Yivo in Lithuania over the past decade is outside the scope of this comment. But there is just one other “little” point in the Foreign Ministry’s news item that deeply disturbs me. I am going to share it. In both the Lithuanian and English versions, credit is warmly given to the Wroblewski Library of the Lithuanian Academy of Sciences as among the three institutions enabling the Edward Blank Vilna Collections Project that has done so much good in rescuing for scholarship internationally so many Yiddish treasures by making them readily available online.

Why was it important for the Foreign Ministry’s news item to mention by name the Wroblewski Librar? Perhaps more to the point, why was the Wroblewski Library chosen to be among the named-for-hisory partners in Yivo’s Yiddish digitization endeavour in the first place? It’s not that they have better scanning machines or anything like that. It’s something much more sinister. The Wroblewski Library has not only proudly flaunted for many years on the library’s central-Vilnius façade a plaque glorifying the cruel Lithuanian Holocaust collaborator Jonas Noreika. When that plaque was destroyed by a protestor back in 2019, the library acquiesced to its rapid restoration, and then (after the mayor had the restored plaque removed), in a cruel twisting of the sword for Holocaust survivors and their families, and remnants of Lithuanian Jewry everywhere, enabled erection of a brand new “bigger and better” plaque featuring addition of a bas-relief sculpture right on the building’s historic facade.

The cruel Holocaust perpetrator Jonas Noreika (author of a prewar antisemitic tract known as the “Lithuanian Mein Kampf”) is just now, in 2021 and 2022, becoming truly well known to the English reading world thanks to Silvia Foti’s pioneering new book, The Nazi’s Granddaughter. How I Discovered my Grandfather was a War Criminal. It is an inspirational document of personal courage and moral integrity that has come around a decade after Defending History’s Evaldas Balčiūnas first brought the news about Noreika (and Noreika worship) to the English speaking world.

To be sure this wasn’t all a weird late spring dream, I went by to check the Wrobleweski Library today, where, surely enough, Noreika hangs high and proud in central Vilnius, a frightful — and shameful blot — on our beautiful capital city. 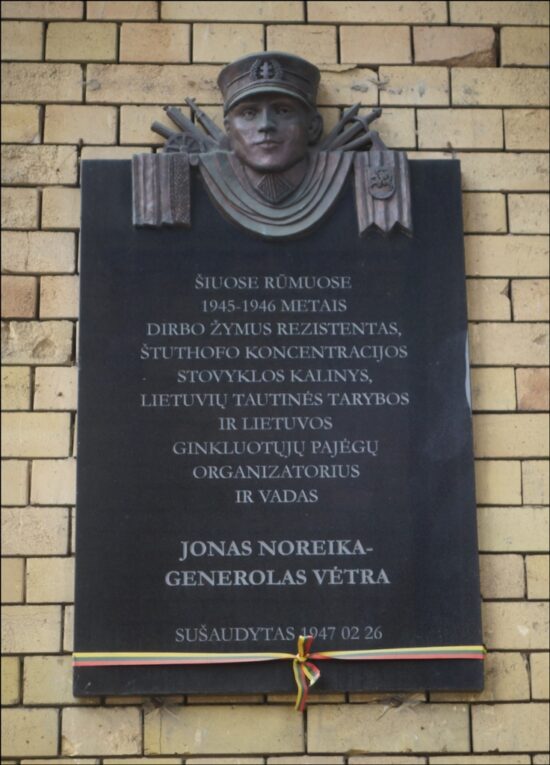 Surely, participating in a major Yiddish digitization project does not mean that a major state institution can continue to escape notice for also glorifying one of those himself heavily implicated in the genocide of a sizable northwestern chunk of the 96.4% of Lithuania’s Jewish (and Yiddish speaking) people murdered in the Holocaust.

Well, it can continue to do both things. But that cannot continue to escape notice. No doubt the eminent and fearless international Jewish leaders and scholars coming to this month’s grand Litvak conference will politely but firmly publicly call for the rapid removal of this city-center monument to a brutal Holocaust perpetrator, perhaps with a photo of them expressing polite dismay standing right there, at the gleaming new Noreika plaque, a stone’s throw from Cathedral Square. Given the opening session of the conference is slated to be held at our nation’s Seimas (parliament), at the other end of the same central thoroughfare, Gedimino Boulevard, they might also discreetly manage to mention the acute pain caused by the Seimas naming last year, 2021 for another alleged Holocaust collaborator.