Perhaps it is because a pure-black-and-white vision of the “new cold war” posits absolutely perfect Baltic states above any criticism, whose every violation of human rights, minority rights and manipulation of history must be sent right to the spin doctors for quickie repair. After all they are so reliable in the grand war against Russia. What a grave error. Nothing could strengthen dangerous forces in Russia more than this kind of whitewash of serious Baltic issues (including incidentally treatment of Russian speakers and culture and accurate history of the years of the Great Britain-US-USSR led alliance that defeated Hitler).

When Western journalists fail to robustly investigate issues in the Baltics, they are tacitly encouraging practices that actually help those very real dark expansionist forces in Russia, reducing security de facto. At the same time, there is the lamentable implication that the long-suffering and hard-working people of the Baltics (and I have enjoyed many years of happy residence in Vilnius among a delightful and welcoming population here) somehow do not deserve the same level of democratic vigilance, openness and admissible criticisms of government policy that are standard for the peoples of the European Union and the NATO alliance.

Nothing does more harm to the Baltics’ secure future than countenancing their far right intellectuals’ efforts to put into the European mainstream the idea that Nazi perpetrators and collaborators might still be heroes as long as they were against Soviet occupation and misrule. When the possibility of “heroism” for Nazi collaborators makes its way into the headline of an Economist blog, you know that things have gone too far.

By always quoting the one and only Holocaust survivor on the planet who is openly in the service of the Lithuanian government’s PR units (and frequently wheeled out by them at staged conferences internationally), by ignoring the real second opinion and the brave Lithuanian citizens who came out with it when it mattered (not in a feeble open letter when all was said and done including some who said the exact opposite during the reburial events), we do a grave disservice to some of contemporary Lithuania’s most valiant citizens.

We see once again a kind of Baltic exuberance session, forgetting that a voice with the power of the Economist should not be put to work for the forces of the far right Nazi-adulators that are sadly reducing rather than enhancing the security of Lithuania, the Baltics and the NATO alliance.

Among the issues of fact and balance arising in the current report are the following (and this list is far from extensive, omitting inter alia the saga of a handful of the signatories glorified in your report actually participating in an untoward cover-up symposium during the very week of the Nazi puppet prime minister’s memorial festivities).

(1) Many of the 1941 fascists being adulated by state funds were not just collaborators in some passive sense; many of those honoured across the country physically participated in the barbaric killing of their Jewish neighbours starting on 23 June 1941, in dozens of locations unleashing the Holocaust before German forces even arrived. In other words, actual Holocaust perpetrators are being honored by the government of an EU/NATO ally.

(2) The Nazi puppet prime minister reburied with full honours and multiple ceremonies last month personally signed the 1941 protocols calling for “all means” against Jewish citizens, calling for a “concentration camp” to be set up (it was actually a mass torture and murder site), and finally, for “all the Jews of Kaunas,” his city, to be forcibly removed to a ghetto.

In all his many later years in America, there was not a single public word of regret from this “hero.” Frankly, this Economist report should not have been headed “Hero or villain?” Putting Nazi collaborators into the tantalizing column of “hero or villain” is deeply offensive to all the heirs of the alliance against Nazi Germany and its puppets, and to survivors of the Holocaust and their families. 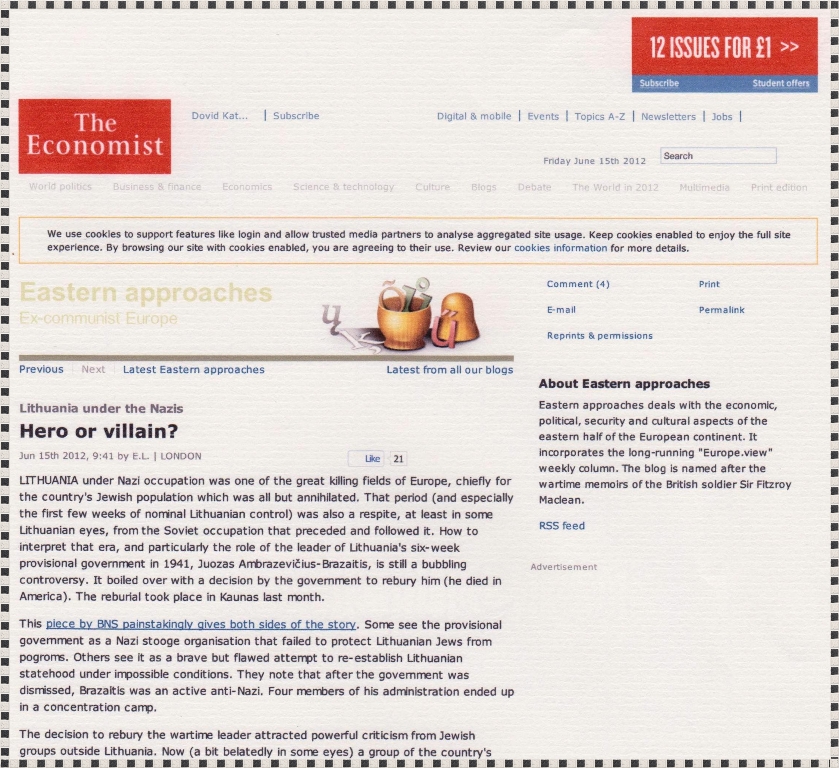 (3) Eastern Approaches tells us accurately that two former heads of state, Vytautas Landsbergis and Valdas Adamkus, attended the reburial of the 1941 Nazi puppet “prime minister” and defended it. But the report fails to tell you that it was the current prime minister and culture minister who personally signed off  on the funding to the tune of €8,700 (UK £6,950, US $11,000).  It also also fails to tell you that the current prime minister and current foreign minister vigorously defended the honoring of the collaborator, not to mention the equally stomach-churning statements by the archbishop, the mayor of Kaunas, and numerous other leaders of society. For shame.

We are left thinking from this Economist report that it is only past leaders who dare express such ultranationalist and antisemitic views (analogous to the United States honoring a “pioneer” who ordered unmarketable African slaves dumped from a ship, but multiplied to the entire ethnic minority concerned).

On the other side of the coin, it is disturbing that the report fails to even mention the very courageous protest motion filed in parliament by very brave leaders of the Social Democratic Party, presumably because your newspaper doesn’t like their other politics. One of them, MP Vytenis Andriukaitis, rose in the Lithuanian Seimas to challenge the foreign minister, in a scene worthy of the House of Commons. MP Andriukaitis is one of the courageous eight Lithuanian parliamentarians who signed the Seventy Years Declaration (SYD) last January, only to be infamously attacked by the (current) foreign minister who went on to explain that moustache length was the “only difference” between Hitler and Stalin. UK MP Denis MacShane valiantly rose to the defense of the signers.

(4) The report tells you about criticism from “Jewish groups outside Lithuania,” thereby falling right into line with the Baltic far-right’s (very Soviet style, as it happens) claims that any and all criticism can only be an orchestration of “outsiders.” In Baltic antisemitic discourse it is typically a euphemism for Dr. Efraim Zuroff, the eminent Holocaust historian who heads the Wiesenthal Center’s Israel office. He is loathed by the antisemitic establishment for asking that suspected war criminals be given a fair trial in their own country and for usually being among the first to stand up against such outrages as the state honouring of a major Holocaust collaborator.

Your report conveniently ignores the powerful statement fearlessly issued before the reburial (when such local statements mattered) by the Jewish Community of Lithuania itself. As if the state’s chosen “Holocaust survivor spokesperson” is the only legitimate Jewish voice in Lithuania, and all the other survivors (yet again) somehow not worthy of interview by the Economist. There were valiant statements from various members of the local Jewish community, including the long-time editor of its paper, Milan Chersonski and indeed, the non-Jewish Lithuanian intellectual community, including political scientist Dr. Darius Udrys.

Full credit to Eastern Approaches, however, for citing MEP Leonidas Donskis’ historically important essay. Just as significant, by the way, was MEP Donskis’s statement issued before the reburial.

(5) Lithuania had her magnificent heroes of 1941: those who risked everything to save a neighbor from the fascist powers (the Lithuanian Activist Front and the Provisional Government) now being touted as heroes by the Baltic far right and in some sense by the Economist as being “heroes or villains.” The real heroes were the rescuers of neighbors at great danger to themselves.

These inspirationally courageous people are Lithuania’s World War II pride. How shameful that the same ministers who just threw all that money at honoring a Nazi puppet who acceded to plans for genocide of one of his country’s minorities, have just this week turned down a proposal to regard as heroes (with increased pension) the tiny number of rescuers still alive.

(6) Readers interested in the other side of the argument are invited to visit DefendingHistory.com, and to consider an international petition now underway calling on the Lithuanian government to remove public memorials to Nazi collaborators and perpetrators. Among the most offensive memorials are two, a lecture hall name and bas-relief dedicated to the recently reburied Nazi puppet prime minister at Vytautas Magnus University (VMU) in Kaunas. One of the VMU based signatories earlier complained that the university and government were just afraid of Jews hitting them over the head with a club. But they can all now prove their sincerity by going beyond PR for foreigners and calling for rapid removal of these offensive tributes to Nazi collaboration. Honoring Nazi collaborators who helped do away with the city’s centuries-old Jewish population is presumably not the message an EU university wants to send its students.

(7) It is a great credit to Lithuania that so many of its own citizens are among the signatories of the genuine international petition, started before the reburial, and continuing onward with a focus on rapid removal of state-sponsored memorials to Nazi collaborators.