VILNIUS—Lithuania’s top neo-Nazi blogger “Zeppelinus” has republished with some noticeable relish, in a post dated 27 May 2017, parts of the 19 May official “Lithuanian Jewish Community website” attack (as PDF) on this journal’s editor, Dovid Katz. The attack was, some would say shamefully, signed “LJC staff” though sources rapidly revealed its prime author (see our rapid response on the day). It is not the first time that the antisemitic far-right has found its material on the website of the official Jewish Community under its current leadership (that is under legal challenge after the recent allegedly rigged election), at a time when the website is, disturbingly, allegedly under control of elements very far from the interests of Lithuania’s Jews. Last autumn’s website attacks on Rabbi Sholom-Ber Krinsky were picked up and elaborated by another key antisemitic blogger who went so far as to  dig up the 1790s antisemitic attacks on a prime founder of Lithuanian Hasidism.

You know something is wrong when the neo-Nazis are finding their material on the “website of an official Jewish community”. It’s a website funded in fact by the state via restitution funds deriving from the communal religious properties of the annihilated Jewish communities of Lithuania, administered by a (this one’s for you, George Orwell) “Good Will Foundation”.

Then there was the most recent fiasco, a comparison of the democratic electoral congress of the Vilnius Jewish Community on 24 May to Russia’s “Zapad 2017” military exercises, and the charge that the assembled 300 or so Vilnius Jews were “mainly Russian speakers calling themselves Jews, with only a minority of people with Litvak blood” (see our report which led to JTA’s coverage, and the essays by Professor Pinchos Fridberg and by Leonas Kaplanas). This was a proverbial gift of the gods to the local antisemitic establishment here that revels in delegitimizing the country’s living Jews while embracing a de-Judaized ersatz “Litvak heritage” for PR, with some help from a tiny elite of privileged “court Jews” who themselves at times, it seems, become conduits for antisemitic invective against the local Jewish community. Prof. Fridberg has pointed out that a subsequent vague and unclear “apology” posted failed to disclose the author(s) of the offending text, and never even appeared in the Russian-language section of the website. Is the author of the offending text still employed by the official “Lithuanian Jewish (Litvak) Community”? Why is his or her identity a secret?

Zeppelinus, with a long history of racist, antisemitic and homophobic postings, as well as numerous photo-montages, paste-ups and photoshops of DH’s editor, accompanied his reprint of the latest LJC effort by an image of him speaking at a conference on Holocaust history in April 2015, with author Rūta Vanagaitė and Lithuanian Jewish community leader Simon Gurevich seated right behind (they were the co-chairs of that session of the conference), with the threesome under the paste-in of the  string-pulling hand of — Vladimir Putin. This newest “success” of the LJC website in the Kukliansky administration, headed by eminent attorney Faina Kukliansky, has now been picked up by the neo-Nazi establishment, and has resulted in several death threats to this journal’s editor this week alone. In the larger picture, the equating of telling the truth about the Holocaust with support of Putinism in 2017 is one of the most popular far-right McCarthyist strategies of  discourse for campaigns of personal destruction in parts of contemporary Eastern Europe. Alas, the American State Department and other Western foreign ministries have, in some views, for the moment abandoned their erstwhile commitment to human rights in this part of the world as a function of the precise current geopolitical situation, in the fact of a revanchist ever more threatening and dictatorial Putinist Russia. 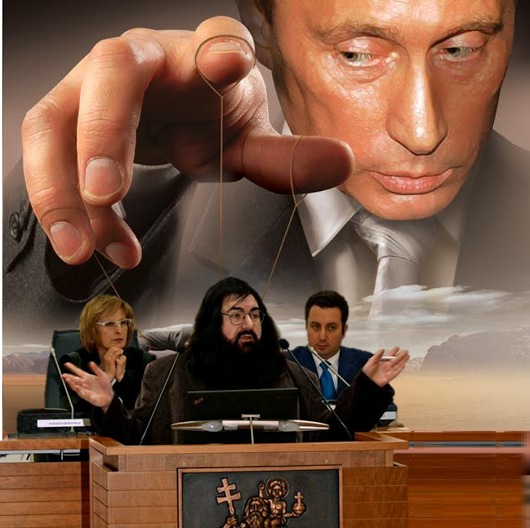 Indeed, over the past half year, Simon Gurevich, Dovid Katz and Sholom-Ber Krinsky, three members of the Jewish community who have worked for Jewish causes here for decades, have been accused on the official “Lithuanian Jewish (Litvak) Community” website of being tools of powerful outside forces, a locally unmistakable euphemism for Putin’s regime which is, in fact, equally (and very publicly) despised and condemned by all three Vilnius Jewish personalities, and by others smeared on the website and by the antisemitic far right (see for example Katz’s reply to Rokas Grajauskas in Lithuanian Foreign Policy Review back in 2011). One may agree or disagree with this or that position of Gurevich, Katz and Krinsky or even their most cherished beliefs about Judaism, Jewish life, the history of the Holocaust and the future of Lithuania’s Jewish people. But the line of decency of debate and human dignity is crossed when powerful websites financed by the state begin to accuse any and every critic of a current chairperson or this or that government policy of “being a Russian agent”. It leaves one in the little chartered territory of an official Jewish community serving the antisemitic far right by applying the primary East European antisemitic trope at will, and indeed, participating in a campaign of personal and professional destruction against the very Jewish people the community exists to represent, support, and include. This is not a “Lithuanian-Jewish relations” issue. One of the three targets of Zeppelinus’s latest “work of art” is Rūta Vanagaitė, the renowned non-Jewish author who has told the truth about the Lithuanian Holocaust in an important book. This is an issue first of neo-Nazi harassment of citizens who dare voice views on history at variance with the far right’s Holocaust revisionism, and second, of human rights and free speech: Can someone disagree with certain state policies on the Holocaust without being called a Russian agent? The quagmire grows when one considers that “Zeppelinus” is considered to be the pseudonym of a high official in the country’s Economy Ministry.

One of the grand ironies here is that one of the (decidedly non-Jewish) LJC employees allegedly involved in penning invective and campaigns of destruction against Jewish community members himself allegedly has a history of spouting undiluted Putinist propaganda in Western publications. While all agree on recognition of the splendid contributions of non-Jews to the Jewish community, the recent tendency to fire Jewish community members from well-paid positions in their own community, and to hire only members of the country’s majority, usually folks with high government connections (in a “Jewish community”) has caused anguish among the remaining three thousand or so Jews who live in Lithuania.

Meanwhile, the “Good Will Foundation” (and particularly the foreign members of its board) may wish to consider the lavish support their allocations provide to a “Jewish” Community website that habitually trashes community members who dare support genuine Jewish causes, whether a Chanukah menorah in central Vilnius that is a source of pride and harmony, preservation of the old Vilna Jewish cemetery, or the holding of bona fide democratic elections for Lithuania’s Jewish community. The international Jewish community waits to hear the views of Andrew Baker, Herbert Block, Aryeh Bucheister, Reuven Dessler, Nachliel Dison and Michael Hilsenrath on this use of funding approved by a board that draws some presumed international legitimacy from the continuing use of their revered names.