VILNIUS—The author of a “Pravda” style invective (see below) absurdly accusing Lithuania (!) of troublemaking in the 2014 conflict in Ukraine is now a major figure in the office of the chairperson of the Lithuanian Jewish Community, eminent attorney Faina Kukliansky, leading to some security concerns about infiltration of political elements in small, vulnerable East European Jewish communities. These may include persons with no Jewish background or loyalty who are experienced “gun-for-hire journalists” who flip their convictions on a dime depending on who is paying them. The results can be tragic with astute sowing of concocted (and needless) interpersonal feuds within weak and fragile remnant Jewish communities that “have enough problems of their own” just surviving in the post-Holocaust post-Soviet environment.

According to sources in Ms. Kukliansky’s office, the author of today’s personal attack against this journal’s editor is the same Mr. Geoff Vasil, author of the piece below, and formerly, for years, a dedicated correspondent on Holocaust obfuscation and neo-Nazi monitoring at DefendingHistory.com (where nothing remotely pro-Putin is ever considered for publication; DH’s stance on the sacrosanct NATO mission to secure Lithuania’s security in perpetuity has been made clear on multiple occasions; authors’ uncovered Putinist advocacy results in severance from Defending History).

But if that is not the case, surely the office of the chairperson will release the name of the actual author. The Jewish Community website, lavishly funded by the Good Will Foundation from funds deriving from the religious communal properties of the annihilated Jewish communities of Lithuania (separate paid editors for each of three languages), is meant to serve the interests of the living Jewish community in Lithuania. Thus, questions are raised over such bylines as “LJC staff” for personal hit pieces against members of the community the site is supposed to be representing. Or does the piece really represent the views and ethos of “LJC Staff” including Masha Grodnikienė, Rabbi Shimshon Daniel Izakson, Ema Jakobienė, Simas Levinas, Julija Lipšic, Liuba Šerienė, Geršonas Taicas, and the other dedicated, terrific staff who have given decades of their lives to honorably serve their community with love and sincerity? Do they deserve to be made part of a fake-news hit-piece’s byline on their own community’s website? 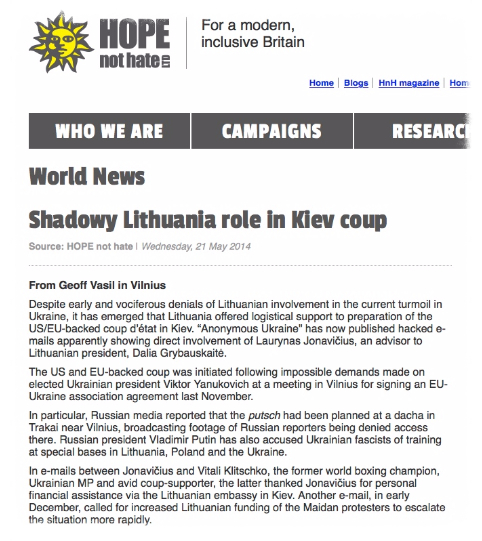 The hate piece on the official “Jewish Community website” was rapidly picked up by neo-Nazi blogger “Zeppelinus”, author of many antisemitic, racist, and homophobic hate pieces, and is in line with many of his own productions about Defending History’s editor, and about other human rights activists in Vilnius and beyond.