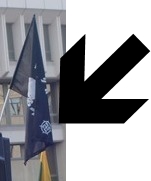 Professor Liekis is an accomplished historian whose academic works are studied around the world. He is also known as an outstanding pedagogue, showing care, love and concern for each and every student, no matter his or her status. It is possible to criticize someone for having for years covered for human rights abuses in the spirit of government PR without negating the individual’s lasting accomplishments in his actual field.

But the newly minted human rights champion and monitor has  less of a record on bona fide monitoring and fighting for human rights, as opposed to extensive and expensive state efforts to cover for in the spirit of nationalist PR rather confront failings. He has never once joined an observer team to monitor the neo-Nazi marches that have taken over the centers of Vilnius and Kaunas on national holidays each year, particularly since 2008. Nor it is said, has he ever publicly supported those actually doing the fighting against antisemitism, or those standing up for Roma rights, LGBT rights, women’s rights, Russophobia, or helped to expose a high official in the economy ministry whose hate materials include some of Europe’s ugliest depictions of Blacks, Jews, and others. Lithuania has a multitude of genuine human rights advocates who stand up and speak out. Defending History’s modest human rights section is here, and in 2014-2015 DH honored seven outstanding Lithuanian-citizen champions of human rights via the first annual series of Prophet Amos Awards.

Professor Liekis’s main academic appointment is at Vytautas Magnus University, where he is also dean of the Faculty of Diplomacy raising new generations of Lithuanian diplomats. But he has yet to speak out on the university’s shrines (a bas relief and lecture hall name) that honor the Holocaust-supporting and collaborating “prime minister” of the “Provisional Government” established upon the Nazis’ launch of Operation Barbarossa and continuing for some six weeks into Nazi rule in Lithuania. On the watch of the Provisional Government and the Lithuanian Activist Front, thousands of Jewish citizens were butchered even before the Germans arrived or set up full administrative control, a fact documented for over forty locations. The shrines to a major symbol of Lithuanian 1941 fascism were the subject of an international petition.

Matters get murkier on these Holocaust related questions. Nobody has suggested that he is remotely responsible for the works of his father, historian Algimantas Liekis, that try to “clean up” and trivialize the murders of thousands of Jews in the earliest days of the Lithuanian Holocaust, turning the perpetrators into “national heroes” while accusing Jews who criticize his view as being lackeys of Moscow and the KGB. But he has been challenged to state publicly whether he agrees or disagrees with his father’s works in a time when even Marine Le Pen has publicly disowned her father’s Holocaust distortions. The elder Liekis’s stances have caused pain to the tiny remnant Jewish community in Lithuania. The analogy between apologetics for the Vichy government in France and apologetics for the Holocaust-accomplice Provisional Government in Lithuania is a powerful one. But there is a big difference between the ambitious children of the elder Le Pen and the elder Liekis: the latter is a state tool in building PR Jewish and Yiddish events, and roping in naive foreigners to cover for the campaign to rewrite history.

In Jewish and survivor circles Professor Liekis is most controversial for his alleged purging of the Vilnius Yiddish Institute and turning it from a year round genuine academic institution at Vilnius University to a summer course that spends the rest of the year serving as a PR Jewish screen-set for Yiddish-hungry visitors.

Over the years many of his speeches abroad and statements to the press have been known for their trashing of the last Jewish professor and only Yiddish-specialist of the “Yiddish institute” (full disclosure — editor of this journal!) he worked so hard to get dismissed after the Jewish professor published articles in the Jewish Chronicle, Guardian and other mainstream publications protesting prosecutors’ campaigns to harass and defame surviving Jewish partisans of the war against Hitler.

The newly-minted entry for the EU’s commission for human rights notes that the new member is fluent in Yiddish. Those with issues may no doubt feel free to correspond with him in Yiddish.

Meantime, members of the Reformed Evangelical Church on Pylimo Street in Vilnius, rocked by an international scandal over worshippers still having to trample old Jewish gravestones on their way to pray, report that instead of now rapidly removing the stones and finding a respectful home in cooperation with Jewish leaders, they have… appointed a committee headed by the nation’s No. 1 point man for “diplomacy with the Jews,” Prof. Dr. S. Liekis. After all, he succeeded less than a decade ago in charming foreign Jewish members of a committee on the fate of the old Jewish cemetery of Vilnius that it was okay for two new buildings to continue going up, and to stay, right on top of hundreds of old Jewish gravestones.

The noble and hard-working people of Lithuania deserve the same standards of bona fide monitoring and reporting in the field of human rights as all other European Union and NATO states, not a nationalist run elite that manipulates the glowing PR instead of dealing with the issues at hand.