The Bubnys Event at the 2015 Jewish Community Auschwitz Commemoration

Posted on 2 February 2015 by Defending History

This year much of the world commemorates the seventieth anniversary of the liberation of Auschwitz in 1945. The day of its liberation, January 27th, is International Holocaust Remembrance Day. To mark the day this year, on the 26th of January, the Jewish Community of Lithuania organized three events, as reported in Defending History.

There were about eighty people in the community’s elegant Yasha Heifetz Hall, mostly people from today’s Vilnius Jewish community. Among them were a number who have a very personal relationship towards the Šiauliai Ghetto: their family roots are in this city and its region, known in Yiddish and Jewish culture as Shavl. Many have lost most of their families in the Holocaust.

The Shavl Jewish community was famous for centuries. In 1902, 9,847 Jewish residents were recorded, amounting to around 71% of the city’s population. On the eve of the Holocaust in 1941, the Jewish population had risen markedly. Estimates range between 6,500 and 8,000, amounting to about a third of the city’s population. Nearly all were murdered in forests nearby or perished at the Šiauliai Ghetto’s mass murder sites. Around 500 ghetto prisoners survived. Their families are scattered around the world. Nowadays Šiauliai is the third largest city in Lithuania, but the specifically Litvak, Lithuanian Jewish, Shávler Jewish and Yiddish culture and life has been destroyed there forever (with no disrespect to the splendid work of its current tiny Jewish community).

Bubnys’s booklet The Šiauliai Ghetto has been published very recently, at the end of 2014. It is 84 pages long and produced in at least two languages, English and Lithuanian. The publication deals with the history of the Jewish community and the ghetto during the period of Nazi occupation, provides basic statistics of prisoners and describes the role and activities of the Jewish Council established coercively by the Nazis.

The author admitted in his introductory remarks that the publication is not original research, but rather a mix, based on previous works, with aims and methodology analogous to those in his earlier publications. The main difficulty in the author’s research is lack of proper documentation from archives. This time, the Yad Vashem museum in Jerusalem provided the publication with photos.

During the introductory remarks, the air in the Yasha Heifetz Hall was increasingly filled with what seemed to be a beat of the heart in unison. Does his book come clean about who the perpetrators were? During some informal conversations before the start, one could hear community members wondering out loud whether a nationalist historian from the Genocide Center who publishes in such far-right publications as Patriotai.lt should even be the guest speaker at a Holocaust Remembrance Day event at the Jewish community. Someone asked a fellow attendee if a contributor to a Front national publication in France would be the guest speaker at a Jewish commemoration of Holocaust Remembrance Day in Paris. 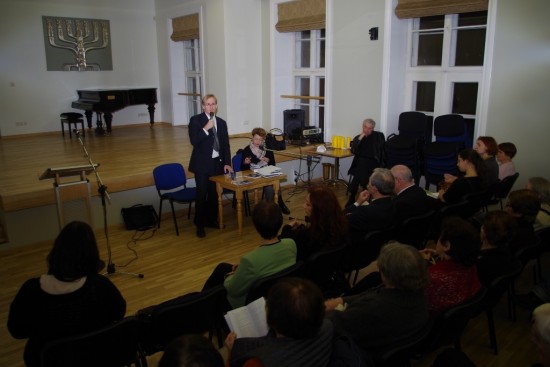 After the author’s short introduction, and meticulously balanced comments from the chair, Jewish Community chairperson Faina Kukliansky, who also offered remarks mentioning how controversial some of these questions are, she opened the floor for discussion, and then carefully made sure that any who wanted to be heard could be heard. It seemed only an instant later that the painful questions start to emerge. As the publication is just one month old, only few have read it through. The discussion starts with figures and numbers. It was painful to watch as the very sensitive and very important issues were about to be raised, and the heart’s expectations were not being addressed by the author in his replies (or in his book). As if we are dealing with something intellectual and sheltered from any and all reality.

Some comments came from community members who felt the need to tell the assembled that their own roots were in Shavl. Then, Jevgenija Sedova of the Jewish museum here, who is the co-author of an earlier work on the Shavl Ghetto raises a question on the map used in the publication. Who is the author of this map? Why is the map author’s name not mentioned in the references? As an expert, Ms. Sedova is invited to the microphone that stands to the left up front, opposite the table at the right where the event’s speaker and chairperson are situated. 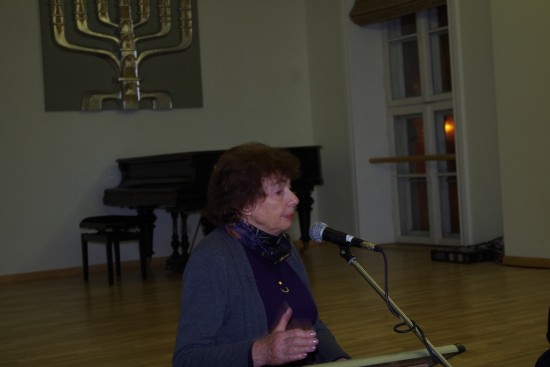 Jevgenija Sedova, who started speaking from her seat, and was then invited up to the microphone by the chairperson, was the hero of the evening by any account. Photo: Julius Norwilla.

In her soft voice, politely but firmly, Jevgenija Sedova keeps asking: Why does the book The Šiauliai Ghetto omit all the prior work of our very city’s Jewish museum? It was the Jewish museum (the Vilna Gaon Jewish State Museum of Lithuania) that in 2002 issued the volume The Siauliai Ghetto: Lists of Prisoners, authored by Ms. Sedova and Irina Guzenberg. The list of 4,500 names is meticulously documented in the volume.

But in any case, the Shavl Ghetto is well known. There are many learned books and papers, memoirs of survivors, as well as literary works. One prime question looms in all of them: Who did the shooting? Ms. Sedova pointed out that this basic question, the identity of the perpetrators, is missing from Bubnys’s new book on the very subject of their murder. The white armbanders and “partisans” (which the “Museum of Genocide Victims” here in Vilnius, under the Genocide Center’s auspices, trumpets as grand national heroes) are mentioned only once. Why? Perhaps the author is driven by a mission to minimize Lithuanian participation? There seems to be a desire to write out of history the first week’s murders in late June 1941 by Lithuanian fascists (before the Germans came or before they set up control) and to start history with the German murders there of June 29th 1941, moving on to the later joining-up of Lithuanian police units with the Germans to carry out the mass genocide of Shavl Jewry.

Ms. Sedova explained that the reader wants to know specifics. Which perpetrators at which times and places? Which perpetrators are named or is that mission impossible? The selection of photographs seems intended to emphasize German soldiers in uniform as explicitly as possible.

When Jevgenija Sedova took the floor, those with copies of the book began to look intently, including the author. Photo: Julius Norwilla.

On the question of the Jewish police and council, forced into existence by the Nazis, Ms. Sedova makes it clear that at the end of the day, it was not the Shavl Ghetto’s Jewish council members who put their neighbors into the ghetto’s miserable conditions or carried out the shootings.

The research and expert discussion on data and accuracy must go on. That is not the main concern with the publication which the author acknowledges is intended for the general public, tourists, who, instead of buying solid volumes prefer an illustrated booklet. This is all the more true when the handsomely produced small work is heavily subsidized by the state’s own Genocide Center that has a hidden nationalist agenda.

There is another issue that merits investigation. During the summer months, when many thousands of potentially interested tourists come to Vilnius, it is easy to find and buy the Genocide Center’s slanted but nicely produced cheap (subsidized) publications, but generally impossible to find in central Vilnius bookshops any of the major works on the Lithuanian Holocaust, even those published right here in Vilnius in both English and Lithuanian editions (like Joseph Levinson’s The Shoah in Lithuania). It almost looks like a “set-up” that cheaply priced “Holocaust chapbooks” (at least four so far by Bubnys: On the ghettos of Vilnius, Kaunas and Šiauliai, and on the Holocaust in Lithuania) are available for the tourists (all in perfect English) but next to nothing of the serious literature that is produced in the spirit of the West’s understanding of Hitlerism and the Holocaust.

The main issue for Dr. Bubnys’s books concerns the lack of human moral judgment, of core humanity. Where is the assessment of antisemitism and participation of local nationalist elites and forces that are sometimes regarded today (not least by his own “Genocide Center”) as having been national heroes? Where are the deeper insights in a broader context along with critical assessment of the events?