Posted on 3 February 2015 by Defending History


KAUNAS—As in previous years (for example, 2013), the Kaunas District Police Department today informed Defending History that it has issued no permits for a march on February 16th, referring us instead to the body that would have issued the permit — the Kaunas City Municipality, which has not (yet) responded to our queries. The letter received (image below) states “We inform you that Kaunas County Police have not issued a permit for organizing a march / rally” on 16 February 2015, and suggests “you refer to Kaunas City Municipality.”

Yet again, it appears that the Municipality has issued the permit for a neo-Nazi march. Last year’s event featured numerous repeated shouts of “Lithuania for Lithuanians,” swastikas and other fascist symbols, and a huge banner glorifying the 1941 Nazi puppet prime minister who signed papers ordering all of Kaunas’s (around 30,000) to be incarcerated in a ghetto. 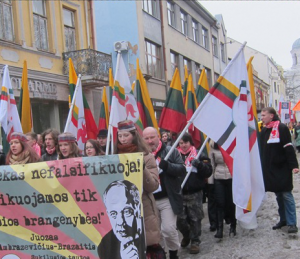 Macabre annual celebration of one of the first collaborators in the Nazis’ project to ghettoize and murder the 30,000 Jews of Kaunas? Photo: Defending History 2013.

The remains of the Nazi puppet PM, Juozas Ambrazevičius-Brazaitis, were reburied with full honors in Kaunas in 2012, and the city’s prestigious university, Vytautas Magnus University, continues to maintain a bas-relief and lecture hall as shrine to the city’s first major Nazi collaborator following the Nazi invasion of 22 June 1941. When there were complaints, one of the university’s top leaders accused administrators of “being afraid that The Jews would come and hit them over the head with a club” (the longtime editor of the Jewish community’s newspaper replied in Defending History).

There is an ongoing petition based in London covering the neo-Nazi marches each year in Kaunas and Vilnius in independence days, and the shrines to Holocaust collaborators, among other issues.

Facsimile of the letter received by Defending History on 3 February 2015: 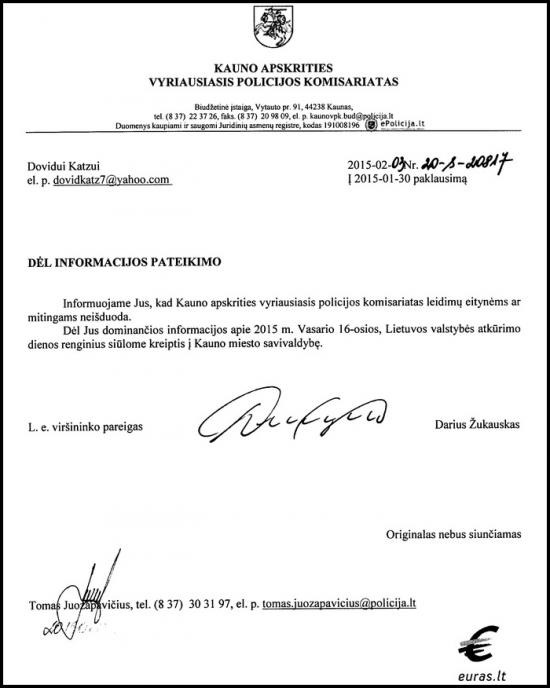